Don't let Trump's GOP enablers off the hook: Denouncing him now is taking the easy way out 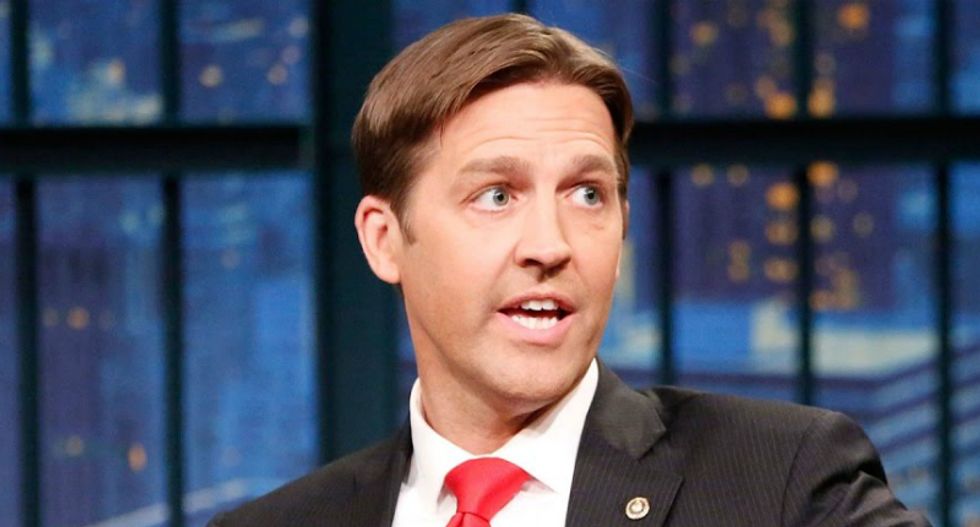 Sen. Ben Sasse (R-NE). Image via screengrab.
It was inevitable that many Republican officials would abandon Donald Trump once it became obvious that he might lose. Rats can always be expected to desert a sinking ship, of course, but establishment Republicans have a longstanding habit of unswerving loyalty to their leaders when they are in power and then rejecting them the minute they lose popularity, often while complaining that they failed because they weren't conservative enough.

Recall that at the end of the George W. Bush administration, as the Iraq war wore on and the economy faltered, the president's approval rating dropped to the high 20s. It was quite a comedown for a president who had once ridden high at 90% in the wake of 9/11 and was heralded as the reincarnation of Winston Churchill by many in the news media. Today he is something of a GOP cipher and his father, a one-termer, even more so.

Ronald Reagan, of course, was a revered conservative figure for many years, but that was mostly the result of a group of so-called "Reagan Revolutionaries" led by anti-tax advocate Grover Norquist who were disturbed by Reagan's low ratings after his term was up and made a concerted effort to turn it around with initiatives such as the "Reagan Legacy Project" which set out to put a Ronald Reagan memorial in every county in the United States.

But for the most part, the reason Republicans are quick to abandon their presidents is because they most often leave office in ignominy and failure. Think about it: Hoover, Nixon, Ford, Bush and Bush. Really, in the last century all they have as political heroes are Eisenhower and Reagan, and the latter took a full-blown campaign to turn him into an icon. And needless to say, despite his belief that he belongs on Mt. Rushmore, I think we know which group President Trump will be joining. In fact, he is in a class all of his own.

Nonetheless, while a president is in office, Republicans are almost always in lockstep. The level of fealty GOP officials have given to Trump goes beyond even the usual conservative team loyalty, however. There's been a lot of ink spilled trying to analyze why that is with most observers concluding that elected Republicans are afraid of their own voters who have a cult-like devotion to Trump. And there's truth to that. Trump's hold on his base is very strong.

So, while it's not surprising to see some Republicans start to break from Trump as his re-election chances appear iffy at best, it's more difficult than usual. There are always a few races in which the candidate will need to assert their "independence" in order to win and the party generally gives them the go-ahead to do what they need to do. But Trump supporters see the slightest criticism as an act of betrayal.

Watching some of the more desperate among them like Arizona Senator Martha McSally try to walk that fine line is almost painful to watch.

Martha McSally refusing to answer a debate question about whether she’s proud of her support for Trump is peak crin… https://t.co/6lP342WcRb
— Aaron Rupar (@Aaron Rupar)1602045607.0

Up until now, McSally has been a very eager Trump acolyte. There is little reason for anyone to doubt her loyalty to the president. And that's her problem.

But there is another dynamic that's starting to emerge among certain ambitious Republicans and I suspect it will be a stampede before too long. The first one out of the gate is Nebraska Senator Ben Sasse, who "accidentally" had a conversation with constituents leak on Thursday to The Washington Examiner in which he had nothing good to say about the president he's supported in every material way for the past four years. Sasse said Trump treated the pandemic like "a public relations crisis instead of a public health challenge" and complained about his foreign policy and other issues:

"The way he kisses dictators' butts. I mean, the way he ignores the Uighurs, our literal concentration camps in Xinjiang. Right now, he hasn't lifted a finger on behalf of the Hong-Kongers," he said. "The United States now regularly sells out our allies under his leadership, the way he treats women, spends like a drunken sailor. The ways I criticize President Obama for that kind of spending; I've criticized President Trump for as well. He mocks evangelicals behind closed doors. His family has treated the presidency like a business opportunity. He's flirted with white supremacists."

He's not wrong about any of it. But keep in mind that on the same day he was trashing Trump on a call he almost certainly planned to leak to the press, Sasse was also extolling the virtues of Judge Amy Coney Barrett in her Supreme Court confirmation hearings, which are only taking place because the Republican Party has become a radical faction that will do anything to maintain its power.

Sasse is very likely running for president in 2024 and he's going to try to sell the idea that he was never on the Trump train so there's no reason to blame him for anything that went wrong during Trump's term. And it would appear that some in the media will help him do that. The New York Times calls Sasse's enthusiastic embrace of radical power plays in contrast with his stated distaste of Trump a "trade-off." It is not. It's called rank opportunism and he is not going to be the only Republican running from his own corrupt bargain.

CNN's Wolf Blitzer played the audio of that conversation on his show on Thursday and the venerable journalist Bob Woodward opined, "He got caught telling the truth. I know there are other Republican senators who feel exactly the same way. and they have not yet been caught. And more catastrophically, they won't share with the public the private conclusion."

Oh, I suspect we'll be hearing a lot of them sharing that "private conclusion" with the public if Trump loses. Sasse is just getting out in front. And it is much too late.

Throughout his term Republicans have backed him for their own purposes, fed his paranoia and obsessive revenge fantasies, and allowed the destruction of the rule of law and our democratic processes to go unchecked. Less than one year ago they had the opportunity to remove this unfit president and they refused. They knew what he was and they protected him anyway.

It's not about the tweets or the nasty insults; it's about the assault on democracy, the horrific abuse of power and the monumental corruption. They had the power to stop it and they didn't. In fact, they enthusiastically used it to their advantage to stack the courts with right wing extremists, deregulate everything in sight and lower taxes on the wealthy.

They must never be allowed to forget that they were eager collaborators in the most corrupt, incompetent and dangerous administration in American history. This was a momentous crucible in our democracy and they all failed, every last one of them.