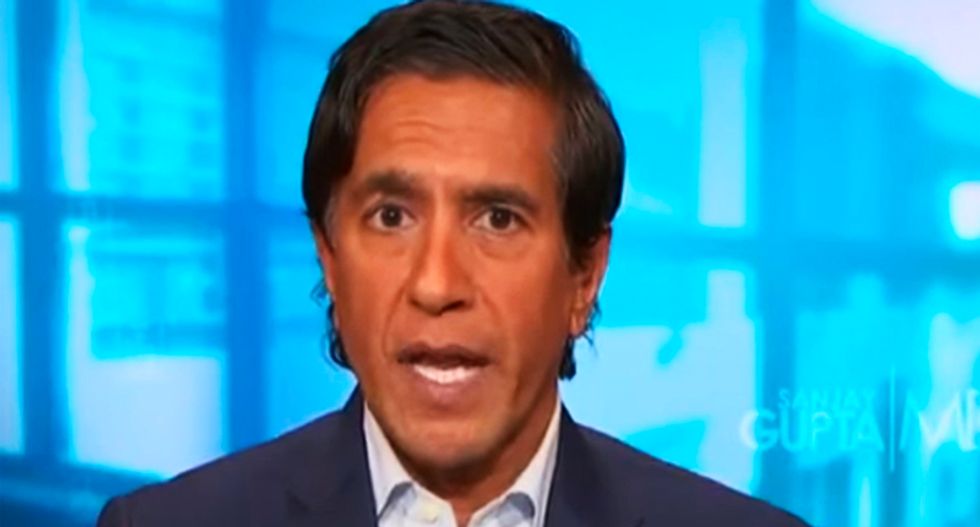 Dr. Sean Conley addressed President Donald Trump's healthcare situation at Walter Reed and the developments over the past several days. But Dr. Sanjay Gupta noted that it is clear the doctor wouldn't reveal anything that could be seen as unflattering for the president like lasting impacts of the virus and other drugs he might be on.

"The medical team saying that President Trump has not had a fever in 72 hours, will receive another dose of Remdesivir before being discharged," said CNN host Jake Tapper. "Dr. Conley refused to answer basic questions about the president's health, including about his lung scans, when the president first took a negative test, on and on and on."

He went on to ask Dr. Sanjay Gupta, the CNN health expert if Conley was withholding information about the president that would reflect poorly on what Trump wants his message to be.

"I don't think we have the information here about the basic things," said Dr. Gupta. "Does the president have pneumonia? Don't have an answer to that. The president needed oxygen. How significant was the impact on his lungs? Don't know the answer to that. We know he's going to continue to get these medications at the White House, like Remdesivir. Again, the White House is a different sort of house, I get it that. They have a medical unit there, but that's part of the reason he went to the hospital in the first place, was to be able to get these types of medication and being monitored while he's receiving them. Why the change here?"

Dr. Gupta went on to ask about blood thinners, which are typically necessary for those who at risk of developing blood clots under some of the COVID-19 treatment drugs.

"He said he's not going to get into the patient's COVID-19 medications," recalled Dr. Gupta. "Well, he has told us about the Remdesivir and the Monoclonal antibodies and the Dexamethasone. So, it just -- it makes you fully convinced that they are still not revealing everything here. Why is that? Because those are basic things. Someone asked a very good question about his cardiac, liver and kidney function, and again, sort of a non-answer answer. I noticed, for example, the medication list they gave, he was no longer receiving his Statin medication. Was that because there was a concern about his liver, because that can have a reaction with the liver? This level of detail is not just for giggles, it's really important for determining what would happen next. Most important thing, Jake, which you mentioned at the beginning, he's not out of the woods."

Dr. Gupta went on to ask if Dr. Conley says that days 7 through 10 are the most critical days, why they then decided to discharge Trump just as he's reaching the worst part.

Tapper noted that HIPAA regulations, which Dr. Conley cited as a reason he couldn't give information, is an excuse he's "never heard" from any presidential administration in his career.

Dr. Gupta agreed, saying that the things that Dr. Conley left out are "really critical details" and that after Trump had a very serious respiratory virus it's still unknown what kind of shape the president's lungs are in.

Dr. Conley didn't answer why he refused to deliver the full truth about the president or why Trump is hiding the specifics about his illness.