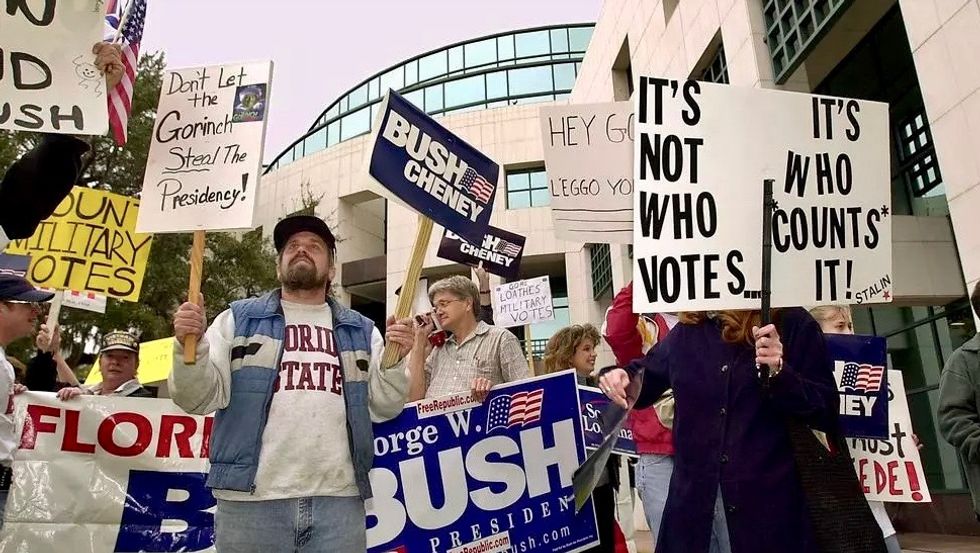 Florida's aborted 2000 recount of some 10,000 ballots could have handed the election to Democratic nominee Al Gore STAN HONDA AFP/File

Two weeks after a knife-edge election, an angry mob claiming a "coup" storms a building to intimidate local officials as they count the final few ballots that will determine the next president of the United States.

This scene from a new HBO movie is not a prediction of what could follow President Donald Trump's re-election bid next month, but a re-telling of actual events that followed Florida's bitterly contested 2000 vote.

The documentary "537 Votes," out Wednesday, recalls how pro-Republican protesters stormed Miami's government center to rage against an ongoing manual recount of some 10,000 ballots that could have handed the election to Democratic candidate Al Gore.

Soon after, the tally was halted, and ultimately George W. Bush won Florida and thus the presidency -- a chain of events the film's director believes could be mirrored on a much broader scale next month.

Analysts say a mail-in voting surge due to Covid-19 could delay the confirmation of next month's winner, with the Transition Integrity Project warning of a possible period of legal and political "chaos" exploitable by both parties.

Trump has prepared the ground should he challenge next month's results, frequently claiming Democrats will hijack tens of millions of mailed-in ballots -- despite no past evidence of widespread irregularities.

He has refused to declare he will accept the election results, and called on supporters to attend polling stations and "protect" ballots, raising fears of clashes if the race turns out to be very close.

Republican Senate leader Mitch McConnell has sought to reassure voters that "the winner... will be inaugurated on January 20th."

But "537 Votes" interviews officials from both sides in 2000 -- including Roger Stone, the Republican operative who later steered part of Trump's first campaign -- who see things less optimistically.

"The recount in Florida was a street brawl for the presidency of the United States," says Stone, speaking to filmmakers last year before his conviction for federal crimes later pardoned by Trump.

"Overheated rhetoric" by Miami protesters accusing the recount of fraud and even a coup "worked extremely well" in securing Bush's victory, Stone says.

"One man's dirty trick is another man's civic participation," he adds.

Corben's film also claims Cuban-American "neo-fascists" in Florida were "weaponized" by Republicans in 2000 after the Clinton administration controversially sent child refugee Elian Gonzalez back to Cuba after his shipwreck.

Trump has been accused of courting far-right groups including white supremacists.

After his ambiguous comments about the Proud Boys militia group at his first debate with opponent Joe Biden caused uproar, Trump said he condemned "all white supremacists."

"These tactics work... they worked in 2000, and (Trump) hopes that they will work again," said Corben. "And if the election is close, they can work again."