Franklin Graham goes apoplectic over Pope’s push for civil unions for gays: ‘The cross would have been for nothing’ 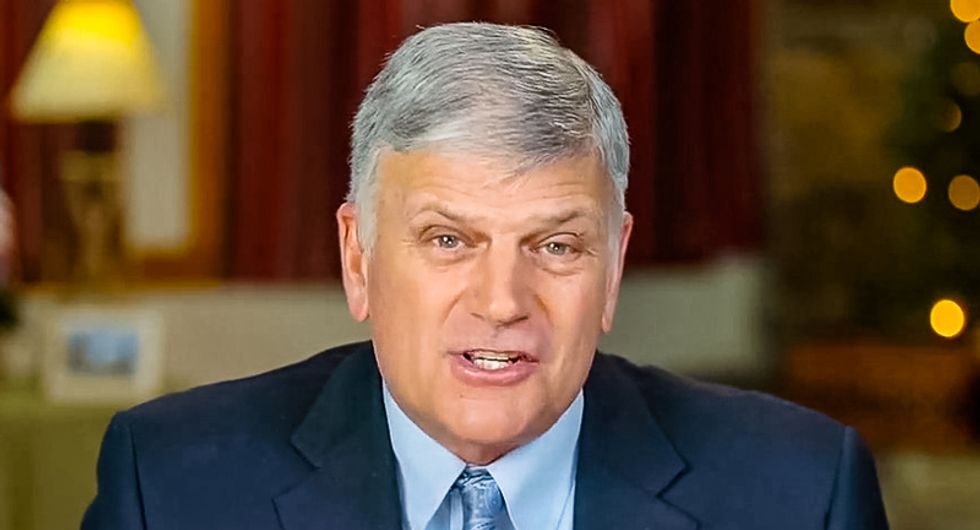 Warns If Gays Do Not 'Repent' They Will Go to Hell

The 68-year old Trump-supporting scion of Southern Baptist minister and advisor to 12 presidents, the late Rev. Billy Graham, took to his Facebook ministry to attack Pope Francis after the pontiff called for civil union laws to protect same-sex couples.

Graham sees the Catholic Church's new regard for supporting LGBTQ people in law – not religion – as so dangerous to the Christian faith he says it would mean Jesus died for nothing.

"For Pope Francis to attempt to normalize homosexuality is to say that Holy Scriptures are false, that our sins really don’t matter, and that we can continue living in them," Graham told his nine million Facebook followers. "If that were true, then Jesus Christ’s death, burial, and resurrection wouldn’t have been needed. The cross would have been for nothing."

To be clear, Graham sees simple legal protections for two people united in love – not even marriage – so despicable he believes it is a direct threat to Christianity and civilization.

"I find these comments from the Pope unthinkable in light of the Word of God," he proclaims.

Graham concludes by serving up some red meat to his flock of homophobes and bigots: gays are going to hell unless they repent.

"I want everyone to know the truth and to find the peace that comes only from fully surrendering our lives to Him and His commands. The consequence of an unrepentant, unbelieving heart is also clear in the Word of God—eternal death. Unless we repent and receive His offer of forgiveness, surrendering our lives to Him, we will spend eternity as part of a different family when we leave this earth—the family of the condemned."