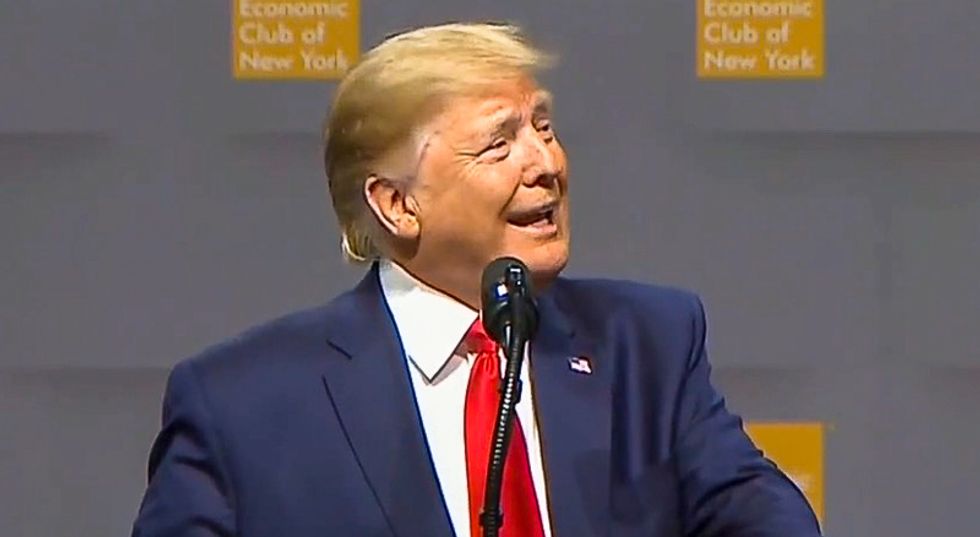 From insults and fearmongering to legal battles and budget cut threats, Donald Trump's love-hate relationship with his hometown of New York has descended into one of mutual contempt after four years in the White House.

With his reelection bid just a week away, the Republican nominee is maintaining his regular attacks on the Democratic bastion, even though he has virtually no chance of winning there.

"New York, California, Illinois. People are FLEEING, Taxes and Crime are going through the roof. VOTE TRUMP, I will turn it around, and FAST!" he tweeted Monday.

A day later the president, who was jeered when he cast his ballot in Manhattan in 2016, doubled down, posting: "New York. Vote for Trump. What (the Hell!) do you have to lose?"

In his first television debate against Democratic challenger Joe Biden last month, Trump described the Big Apple, from which thousands of wealthy residents have fled and whose offices are still deserted over coronavirus fears, as a "ghost town."

"Take a look at New York and what's happened to my wonderful city. For so many years I loved it, it was vibrant -- it's dying, everyone is leaving New York," Trump said.

New York's left-leaning Mayor Bill de Blasio responded by telling Trump in a tweet that "the only 'ghost town' will be Mar-a-Lago after you're forced into retirement on election day," referring to Trump's Florida residence.

New Yorkers took to social media to post photos of busy streets and memes ridiculing the suggestion that their city was a "ghost town."

"He is hated in this city by most people, except maybe those who have money," said 74-year-old Susan Levin, a retired secretary, after she cast an early ballot for Joe Biden at the weekend.

The first New York-born president since Theodore Roosevelt at the beginning of the 20th century, Trump does have his supporters in the city.

There are pro-Trump pockets in Staten Island and in several neighborhoods of Queens and Brooklyn. His pro-Israel policies have made him popular with large Orthodox Jewish communities and the city's main police union has endorsed him.

But come Election Day, all pollsters expect the Republican to once again be overwhelmingly rejected by his hometown after 79 percent of New York voters opted for Hillary Clinton in 2016.

Trump may have his name on countless skyscrapers and hotels but the property developer-turned star of reality TV show "The Apprentice" has never been loved by Manhattan's elite, according to marketing executive Kenneth Scarlett.

"The liberal class here always saw his buildings as garish and ostentatious," he told AFP.

Matt Eldridge, a 33-year-old economist in Manhattan, said: "His presidency is the antithesis of everything that New York stands for, which is about openness and people from many different backgrounds sort of working together for the common good."

The disputes between Trump and New York run deep.

Shortly after arriving in the White House in January 2017, Trump launched a crackdown on undocumented migrants which New Yorkers viewed as against everything the cosmopolitan city, with its Statue of Liberty honoring migrants, stood for.

The Trump administration responded by announcing the withdrawal of some federal subsidies, the start of a long legal saga.

As the controversies accumulated, Trump's visits to New York became shorter and rarer, with the president opting instead to stay at one of his golf clubs in New Jersey rather than at his former home in Trump Tower on Fifth Avenue, which became a rallying spot for angry protests.

The pandemic, which wreaked devastation in New York City in the spring, further exacerbated tensions as Democratic leaders resisted calls from Trump to reopen.

For months, De Blasio and Governor Andrew Cuomo have been calling, in vain, for the federal government to help them meet a massive fiscal shortfall which is threatening public services.

If Trump is reelected, then the budget feud is likely to escalate.

In September, the president listed New York as "anarchist," citing the surge in murders and shootings which followed mass demonstrations against police brutality after the killing of George Floyd in May.

In response, the city sued the Trump administration over the move, which could see New York lose $7 billion in federal funds.

With such acrimony, few envisage Trump returning to New York for good if he gets booted out of the White House.

He changed his official residence to Florida in November 2019 and voted in that key state on Saturday.

"He is like a spurned lover -- he wants the adulation for New York and he never got it, so now he says, 'I never wanted it anyway,'" said Scarlett.