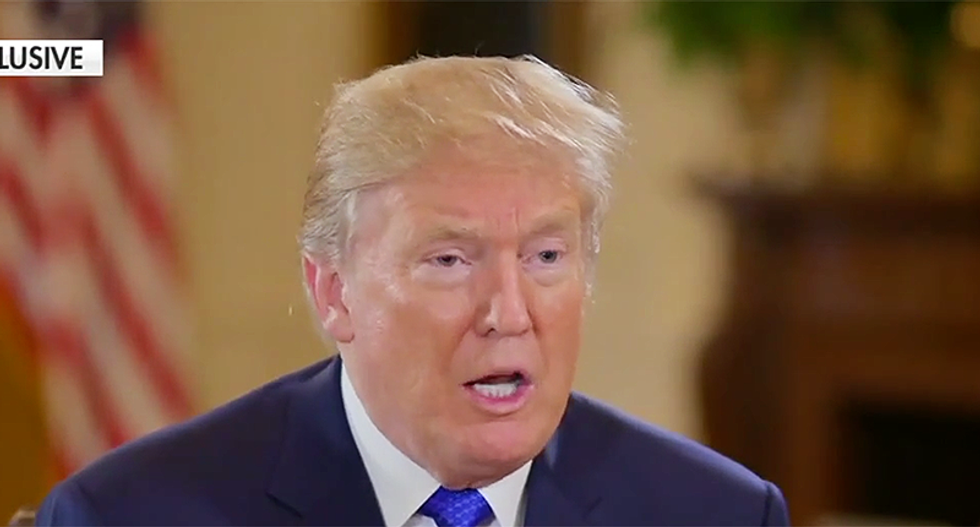 President Donald Trump on Thursday did an interview with Fox Business's Maria Bartiromo in which he made a series of wild and unhinged accusations against his political opponents.

Below are the five craziest moments from the president's rant.

1.) Trump says that Attorney General Bill Barr can only be considered successful if both former President Barack Obama and Democratic rival Joe Biden are arrested for purportedly "spying" on his campaign.

Even though Barr has said he does not expect Obama or Biden to be charged with any crimes, Trump complained that wasn't good enough for him.

"Unless Bill Barr indicts these people for crimes -- the greatest political crime in history of our country -- then we'll get little satisfaction," Trump said. "And that includes Obama and that includes Biden."

"Unless Bill Barr indicts these people for crimes -- the greatest political crime in history of our country -- then… https://t.co/ESjGYbPoOc
— Aaron Rupar (@Aaron Rupar) 1602159808.0

2.) Trump calls Kamala Harris a "monster" and a "communist" and implies that she'll try to overthrow Joe Biden within two months of getting elected.

“She’s going to be, in my opinion, within a month… look, I sat next to Joe and I looked at Joe, and Joe’s not lasting two months as president,” he said. “She’s a communist! She’s not a socialist, she’s well beyond a socialist!”

Later in the interview, he described Harris as "this monster."

3.) Trump brushes off polls and says he knows he's winning because of his support from boaters.

The president was asked what he made of a slew of new polls that showed him trailing Biden by double digits -- including one from the reliably conservative Rasmussen that showed him down by 12 points.

4.) Trump said that no one even disputes that he's done more for Black Americans than anyone since Abraham Lincoln.

The president has regularly claimed that he's done more for Black Americans than any president since Abraham Lincoln, which historians have said is a ridiculous claim given the actions taken by presidents such as Harry Truman and Lyndon Johnson to advance civil rights.

Now, however, the president is so confident in his false claims about helping Black Americans that he thinks it's beyond dispute.

"Nobody's ever done what I've done for the Black community other than Abraham Lincoln!" he said. "They don't even challenge me on that!"

5.) Trump rants about Hillary Clinton's emails and demands to know why she hasn't been indicted.

Even though the Clinton State Department email scandal hasn't been in the headlines for four years now, the president talked about it multiple times during his interview.

In fact, Trump even brought up the Clinton emails completely unprompted after Bartiromo told him that she'd love to do an in-person interview with him soon.

"Why isn't Hillary Clinton being indicted for terminating 33,000 emails?!" he yelled. "Everybody else I know gets indicted... she destroyed 33,000 emails! Forget about the fact that they were classified, maybe Mike Pompeo finally finds them!"