Here are the times Trump egged on extremists who were targeting Michigan Gov. Gretchen Whitmer 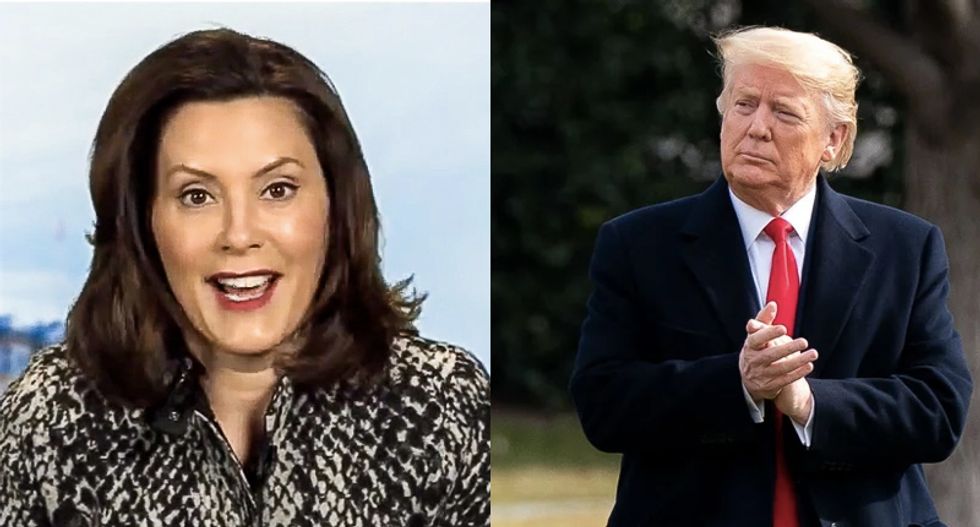 Michigan Gov. Gretchen Whitmer (D) spoke in an address Thursday about the militia members she said were plotting to kidnap and possibly even kill her. She accused President Donald Trump of stoking domestic terrorism by legitimizing hate groups.

In early March, the coronavirus exploded across the state of Michigan, infecting more than 5,500 people with nearly 1,000 new people getting the virus daily. Despite knowing that the virus was deadly and very contagious, Trump blamed Whitmer for not doing enough for her own people. She, like many governors, was desperately trying to get personal protective equipment and ventilators for the growing number of people filling hospitals.

"And your governor of Michigan, I mean, she’s not stepping up," Trump said to Sean Hannity on March 27. "I don’t know if she knows what’s going on, but all she does is sit there and blame the federal government. She doesn’t get it done, and we send her a lot. Now she wants a declaration of emergency, and, uh, we’ll have to make a decision on that. But Michigan is a very important state. I love the people of Michigan, what they do. I’m the one — I’m bringing back many, many car factories into Michigan. She is a new governor and it’s not been pleasant."

"By the way, most governors have been fantastic," Trump continued. "I have to tell you, whether it’s Democrat or Republican. But we’ve really had some trouble with the state of Washington. The governor — you know, he ran for president, didn’t exactly do well, he got zero. And we’ve had a big problem with the young, a woman, governor from — you know who I’m talking about — from Michigan. So we can’t, ah, we don’t like to see the complaints."

It was just days later that Trump said that he told Vice President Mike Pence, "don't call the woman in Michigan" for the coronavirus meetings with governors. Trump then referred to her as "Gretchen 'Half' Whitmer" in a tweet saying she is "way in over her head" and "doesn't have a clue."

Whitmer responded by saying that she has "asked repeatedly and respectfully for help. We need it. No more political attacks, just PPEs, ventilators, N95 masks, test kits. You said you stand with Michigan -- prove it."

Trump's attacks proceeded to get worse over the course of the months that followed. By May, armed right-wing protesters flocked to the state capitol to demand officials raise the lockdown and mask mandates. That was the first point of rage for the militia members who began organizing a team to kidnap Whitmer and bomb the state capitol.

See the list of tweets from Trump about Gov. Whitmer, the attorney general and the state below:

Failing Michigan Governor must work harder and be much more proactive. We are pushing her to get the job done. I stand with Michigan!
— Donald J. Trump (@Donald J. Trump)1584451638.0

I love Michigan, one of the reasons we are doing such a GREAT job for them during this horrible Pandemic. Yet your… https://t.co/Zw0TRRZFmD
— Donald J. Trump (@Donald J. Trump)1585362597.0