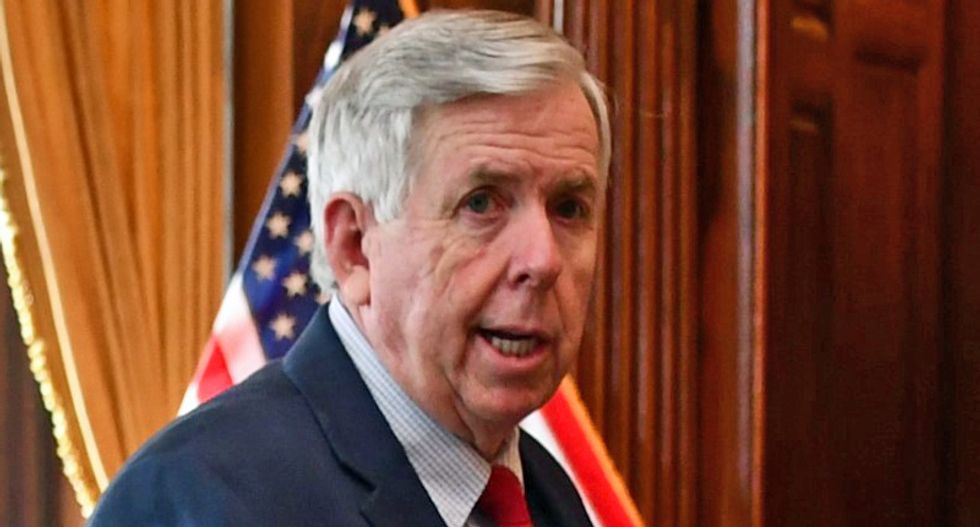 Missouri Governor Mike Parson is one of the nation’s leading Donald Trump acolytes, right down to refusing to issue a statewide mandate to wear what he has termed “danged masks.”

Like Trump, Parson and his wife Teresa both contracted the COVID-19 virus, thankfully recovering, but only to emerge unbowed as if there was nothing to see here. He won’t consider mask mandates to this day, even as Missouri remains one of the top-spiking states in the nation.

Now, Parson’s Trump-worship has taken an even more pathetic turn. Like the boss man, it turns out he wasn’t about to be deterred by some snowflake concerns over a potential super-spreader setting.

The St. Louis Post-Dispatch is reporting today that Parson “proceeded with a September 16 event at a state office building last month after staff warned his office of a cluster of COVID-19 cases among state workers in the building,” according to emails obtained by the newspaper.

The Parsons announced their positive diagnosis a week later on September 23. On September 15, the day before his brilliant foray to a building with a known COVID cluster, Parson had visited a state veteran’s home in rural Missouri where he had proclaimed on Facebook his state veteran’s commission “had set the standard nationwide for veteran homes.

The next day, September 16--while Parson was visiting the state office building with the cluster--the state “logged its first case of the virus at the (veteran’s) home. Alrighty then.

The public has no knowledge of when and how Parson might have contracted the virus--that sounds familiar--and apparently the staff of the often-unmasked governor hadn’t overly concerned about him sauntering into that September 16 event at the Harry Truman State Office Building in Jefferson City even though a “small cluster” of cases had been reported there.

The Post-Dispatch reports the email indicated that 12 of 100 people tested had come back positive. So, this exchanged ensured between Lori Croy, a staffer at the building, who was writing Parson spokeswoman Kelli Jones to see if the governor wanted to proceed with some ceremony “given the building situation.”

Here’s how that exchange went, according to the Post-Dispatch:

““Most of these were from people showing NO symptoms,” Croy’s email said. “It is important to remember that even if someone does not show symptoms, he or she can both spread the virus to others and suffer adverse health effects.”

Parson would eventually announce that he and his wife contracted the virus two days before Virginia Ralph Northam and wife Pamela made an identical announcement. One Republican, one Democrat, one non-partisan virus.

The difference was that Northam, a Democrat, had ordered a mask mandate in May as opposed to Parson continuing to scoff at such a thing even as Missouri’s numbers COVID-19 continue to skyrocket today. There have been numerous reports of stress rural hospitals and, now, some in metropolitan areas.

Missouri has repeatedly set records in October for COVID hospitalizations, positivity rates and cases. The state is up to 162,723 cases and 2,657 deaths--10 per day in the past week--but like Trump, Parson keeps changing the subject.

Today, Parson went after Cori Bush--a Black progressive woman in St. Louis, who shocked Rep. Lacy Clay in August--because she jovially tweeted two days ago: “If you're having a bad day, just think of all the social services we're going to fund after we defund the Pentagon.

This, of course, has nothing whatsoever to do with Parson’s tight race in 11 days against State Auditor Nicole Galloway, who advocates a mask mandate. But today, you’d think Parson, a governor had gotten mixed up and thought he was running for Congress.

“Make no mistake — defunding the Pentagon means defunding the military,” Parson said on Facebook. “These comments against our military are irresponsible and unacceptable — and should be denounced by every elected official.”

Meanwhile, like Trump, Parson didn’t have much to say about Galloway, the person he’s actually running against, nor Missouri’s runaway pandemic numbers and his failure to get a grasp on them. He’s using the Trump playbook of trying to wish the virus he has so irresponsibly ignored.