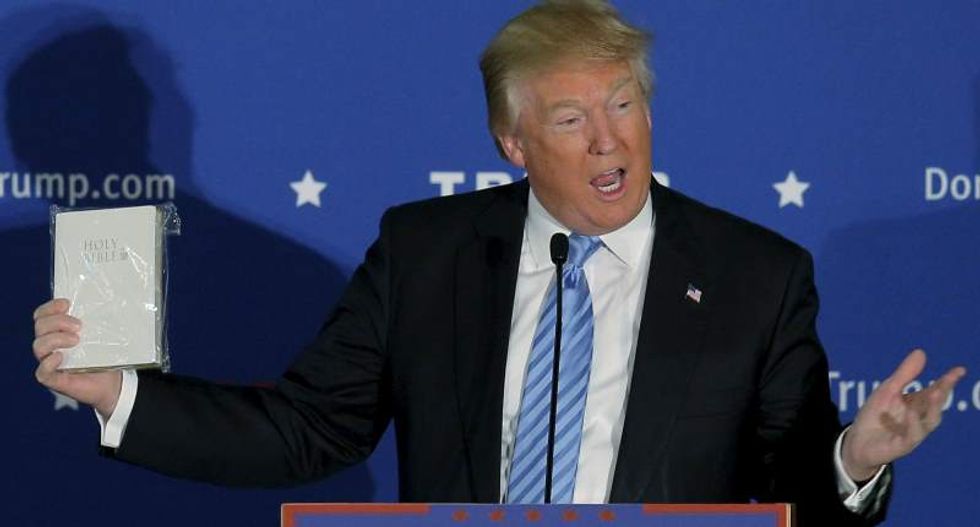 Donald Trump holds a Bible given to him by an audience member at a campaign rally in Windham, New Hampshire, on Jan. 11, 2016. (Reuters/Brian Snyder)

Political analyst Napp Nazworth watched as The Christian Post (CP) made its "gradual descent" from being anti-Trump to pro-Trump, often questioning whether or not he should jump ship from the publication. But what happened on Dec. 23, 2019, made the decision painfully clear.

"I was told by Michelle Vu, my boss at The Christian Post, to publish a pro-Trump op-ed as an editorial, meaning it was to express the position of the media organization," Nazworth wrote at Arc Digital. "'It can’t be an editorial,' I explained, 'because I don’t agree with it and I’m an editor.' Vu said she would call me back."

Nazworth served as political editor at The Christian Post from 2011 to 2019. Before that, he worked in academia for six years, choosing to switch careers because "academics and journalists share a common mission: to be truth seekers and truth tellers."

The conversation with Vu was unusual, so he grabbed his voice recorder when she called him back.

“… right now I know that you’re very upset about this and it is your decision whether you can accept that or not. If you can’t, then we will discuss after that. OK?” Vu said.

I replied, “You just … we had this conversation where you were like, ‘we don’t want to position ourselves as being pro-Trump or anti-Trump.’ Do you understand what this op-ed is doing?”

“Actually, OK, let me backtrack,” Vu said, “I know what I said and why you think that, but we have ‘NeverTrump’ articles on CP. It’s not like we’re only, but actually [CEO] Chris [Chou] and my view, we agree on this. This is CP’s view, you know, and within CP there may be people who disagree and we publish it. It’s not like we’re not letting you publish.”

That wasn’t true; more on that later.

“But this is CP’s view,” Vu continued. “So that is the fundamental question. Can you work in this? If you can’t, then we need to discuss. Like, you know, if you can continue. CP is not firing you, but you might quit over this. I understand that.”

I responded, “You will destroy the reputation of The Christian Post if you go in this direction.”

After I continued trying to convince Vu that she was making a bad decision, she said, “I understand that you strongly disagree and you, this is unbiblical blah blah blah, but I really, it’s just a fundamental issue right now, because we strongly want to publish this. This is our view. So, we need to discuss now if you can continue to work in this environment or not.”

The call became more ominous from there. CP used to deal with disagreements through a term they called "editor chats," but Vu told Nazworth that was not what they were doing.

“OK, Napp, like, I’m not having an editor’s chat right now,” Vu said on the recorded call. “Do you want to take time to think about this and then talk to me? … No one wants you to leave but we have to publish this. This is really our view.”

When pushed to clarify whether or not CP was ready to tell the world they were "Team Trump," Vu responded, “I understand. Yeah. We are."

"While I was there, CP was never run by evangelicals of the Trumpian sort," Nazworth wrote. "Trump-supporting evangelicals are generally like Trump supporters in general — old, white, male, and rural or suburban. Most of the staff at CP are none of those, and instead tend to be young, urban, non-white, and first or second generation immigrants. I reported to women younger than me. A typical Trump voter is more like me, a middle-aged white male, but few at CP fit that mold."

Nazworth recalled that many of CP's regular op-ed contributors were originally against Trump -- until they flipped.

Matt Barber wrote in Sept. 2015, “Trump is no conservative. He’s a big-government, tax-and-spend liberal who has spent most his life supporting Democrats and Democratic causes. Mr. Trump’s moral compass lacks due north. Its needle spins faster than Hillary Clinton on a Tilt-A-Whirl. Donald Trump believes what Donald Trump believes because he’s Donald Trump — not because what he believes has any basis in fact.”

Barber is a now a strong Trump supporter.

Pastor Mark Creech, a CP editorial adviser, wrote a Feb. 2016 op-ed titled, “Trump Represents Everything Opposite to Christianity" in which he offered, “Is there anyone who better personifies a worldly lifestyle than Donald Trump? He’s the perfect example of everything [the Apostle] John warns believers to stay far away from becoming... His face has donned the cover of Playboy magazine, and he’s bragged about his sexual escapades with numerous women. He’s owned strip clubs, cheated on his wife, and has married three times. It’s not that any of this is beyond the vast scope of God’s grace, but Trump has also said he’s never asked God for forgiveness. Grace is for the repentant.”

Nazworth referred to Pastor Wallace Henley as CP's "best writer," calling him "smart, thoughtful, and level-headed." In Aug. 2015, Henley wrote a three-part series warning about the dangers of Trump under the themes populist progressivism, judgment-impairing presumptuousness and selfie-solipsism.

Henley now says he will vote for Trump in 2020.

Nazworth recalled the infamous Access Hollywood tape first reported by The Washington Post on Oct. 7, 2016. "It should’ve easy for the Christian Right to denounce Trump, given all it stood for over the previous four decades. Instead, we witnessed a host of evangelical leaders defend and make excuses for Trump."

There was a communication breakdown at CP following the election of Trump in 2016.

"After Trump’s election, our editor chats became less frequent and eventually stopped," Nazworth said. "The open debate and discussions we had were replaced with one-on-one phone calls among like-minded editors, sometimes regarding what to do about their rogue NeverTrump politics editor. I had also moved to Texas in 2016, so face-to-face interactions had stopped as well. We mostly communicated through Spark, a messaging app... After a while, stories that presented Trump in a negative light were met with additional editorial drama and scrutiny. Sometimes they were softened or pitches were rejected altogether. CP’s coverage of Trump was also changing because CP readers were changing."

Nazworth also remembered, "We were often pressured to become more Trumpian by Johnnie Moore. Johnnie Moore doesn’t officially work for the White House but is possibly the most important White House figure when it comes to outreach to evangelicals. Paula White-Cain is technically the leader of Trump’s evangelical advisory board, but Johnnie Moore is the workhorse that makes it run."