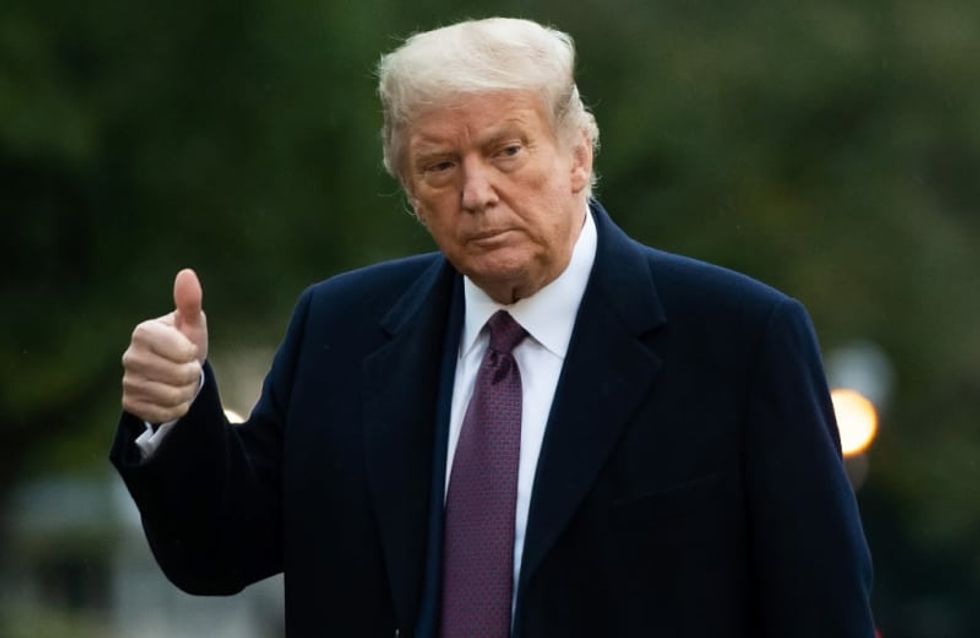 President Donald Trump was treated Friday for Covid-19 with a high-dose of the experimental antibody drug developed by the US biotech firm Regeneron.

What is it, how far along are its clinical trials, and why do some experts disagree with using a medicine before it's been approved?

Here's what you need to know.

Regeneron's treatment, called REGN-COV2, is a combination or "cocktail" of two antibodies: infection-fighting proteins that were developed to bind to the part of the new coronavirus that it uses to invade human cells.

The antibodies attach themselves to different parts of the virus' "spike protein," distorting its structure -- similar in a way to knocking a key out of shape so it no longer fits its lock.

Vaccines work by teaching the body to make its own antibodies, but scientists are also testing ready-made antibodies from convalescent plasma, taken from the blood of recovered patients.

Researchers can also comb through antibodies produced by recovered patients and select the most effective out of thousands, and then manufacture them at scale.

In a paper published in Science in June, Regeneron scientists described how they selected the two best antibodies from both recovered human patients and infected mice that were genetically modified to give them human-like immune systems.

In another paper in the same journal, scientists argued that by using two antibodies, they had guarded against the possibility that SARS-CoV-2 might randomly mutate to evade the blocking action of one, and then go on to become the dominant strain of the virus.

The company used the same "humanized mouse" technology to develop a triple-antibody cocktail which was shown to be effective against Ebola last year.

"That's part of what's giving us confidence, the platform has been tried and has been shown to be to work very, very well," Christos Kyratsous, Regeneron's lead infectious disease scientist told AFP in March.

The treatments are given by an intravenous drip.

Clinical trials are being carried out to test the drug's safety and efficacy at different dose levels and to compare it against a placebo, to answer this question.

On Tuesday, the firm announced some results from an early stage clinical trial, saying that its treatment reduced the viral load and recovery time in non-hospitalized Covid-19 patients.

The results related to 275 patients, and Regeneron's president George Yancopoulos said the company had begun talks with regulatory authorities -- presumably for temporary approval before full licensure.

But the detailed data hasn't yet been made public or peer-reviewed.

In terms of safety, it said "infusion reactions" were seen in four patients -- two on placebo and two on the drug, while "serious adverse events" occurred in two placebo patients and one on the drug. No one died.

The company did not detail what these side-effects were, but Arun Swaminath, a doctor at New York's Lenox Hill Hospital, said that in general, mild reactions to IV-therapies include fevers, chills and fatigue.

More serious symptoms include chest pain and shortness of breath.

The outpatient trial has now moved to late-stage.

The decision to give Trump the treatment before the trials have even produced enough data for emergency use authorization has puzzled some scientists.

Carla Perissinotto, a geriatrician and professor at the University of California, San Francisco, told AFP that using unapproved treatments on a "compassionate use" basis normally happens when everything else has failed.

"The risk of having side effects is so much greater, that I usually am very cautious about anything that's experimental and not proven," she said.

Jeremy Faust, a public health expert at Harvard, said it raised uncomfortable possibilities: Either the president's team had not understood the scientific process, or they had understood but were overridden by Trump on someone else's advice.

"People will see this and they'll think that this is the treatment you should have -- and if you don't give it to other people who have coronavirus that we're denying them special treatment.

"In reality that's not the case... we shouldn't be treating the president as a guinea pig."