Hopeless in Baltimore, ground zero of US 'urban apartheid' 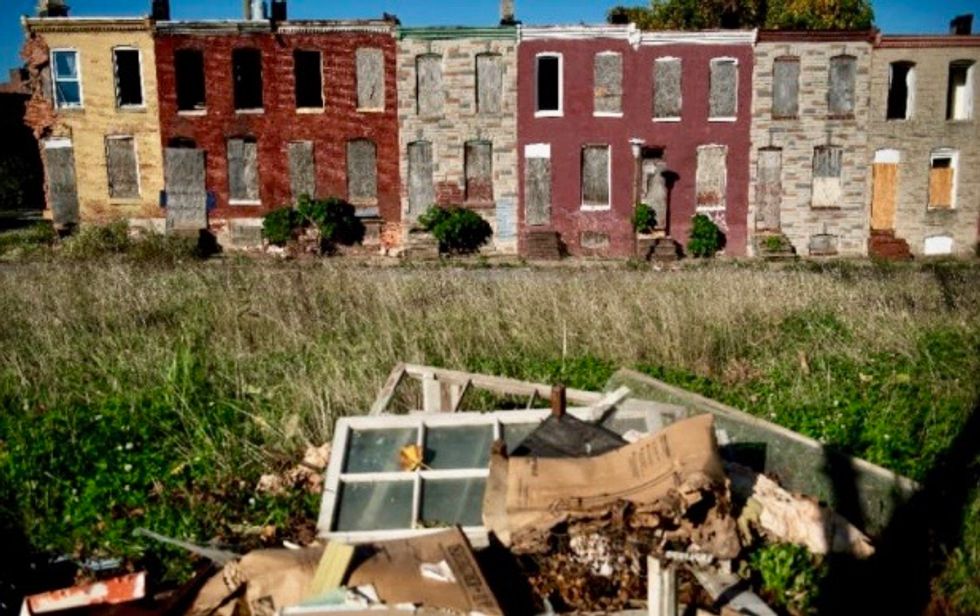 His area is overwhelmingly Black, deeply poor and devastated by decades of neglect, which stands in stark contrast to the pricey condos, new stores and safe streets a few miles away in overwhelmingly white and affluent areas.

Baltimore is nearly two-thirds Black, yet it's also been ranked one of the nation's most segregated cities, where experts say the poorest African Americans are expected to live about two decades less than people in the wealthiest white districts.

Across the street, trash was piled waist-high and most of the next block was covered in grass because its abandoned houses had been bulldozed, some of the thousands of empty buildings in a city that has been shrinking for years.

Down the road, past another block of vacant homes, was a drug dealing spot Lane called "crack central." During the warmer months of the year, he estimated he hears gunfire three times a week.

"I have no hope. The only thing I have hope in is my own self -- what I can do for my family", he added.

Baltimore's troubles have been a political tool for President Donald Trump, who has repeatedly attacked the city that has been Democrat-led for decades, most recently calling it the "WORST IN NATION."

Frustration at racial inequality boiled over in 2015 following the death in police custody of a 25-year-old Black man, Freddie Gray, and this year's nationwide Black Lives Matter protests found a strong resonance in the city.

Some areas, to the east and west of downtown Baltimore, were over 90 percent Black with median incomes as low as $14,000 per year, according to 2016 city figures.

Some of Baltimore's wealthiest areas, with median incomes as high as $110,000, were over 85 percent white, the same figures said.

It's a division that experts said was born of an ugly past of racism in the city.

"Baltimore actually is ground zero for urban apartheid in America," researcher and activist Lawrence Brown said in an interview posted to YouTube earlier this year.

He noted that Baltimore's leaders passed the first residential racial zoning law in America's history in 1910, which said Black people could not move onto white-majority blocks and vice-versa.

The US Supreme Court struck the law down seven years later, but other measures like "restrictive covenants" in property deeds that barred Black ownership or rental, remained enforceable for decades more.

Brown coined the phrase "Black Butterfly" to describe how African Americans are concentrated in poor areas east and west of Baltimore's downtown, while a strip of affluent white areas run between.

He notes that public investment in white-majority areas has paved the way for private money to follow, yet this has not happened in the Black areas.

Those neighborhoods have had schools without heat in the winter, Black unemployment that is at least two times higher than among whites and homes on Lane's block that are estimated to be worth less than $20,000.

Journalist and author Lawrence Lanahan told AFP one of the starkest illustrations of Baltimore's divisions is life expectancy: a baby in the wealthy, white north was expected to live about two decades longer than one from the poor, Black east.

"You can put all the Black Lives Matter flags that you want -- if you are white, you will still benefit from the system," Lanahan said.

"Wealth follows whiteness and blackness gets penalized and that's why things never change."

Some experts have urged Baltimore to pay vast sums of reparations to its Black neighborhoods or to create a locally-managed fund to launch major projects to help revive the worst-hit neighborhoods.

Trump meanwhile has thrown his backing behind Kim Klacik, a Black woman who is running for a local US Congress seat on November 3, and whom the president said will "fix it, and fast".

But for east Baltimore resident Edmond Hargrove, a 43-year-old African American, change isn't coming regardless of who has sworn to finally solve the neighborhood's misery.

"We're always forgotten. They promise us stuff... six months after, it goes right back to the way it was."