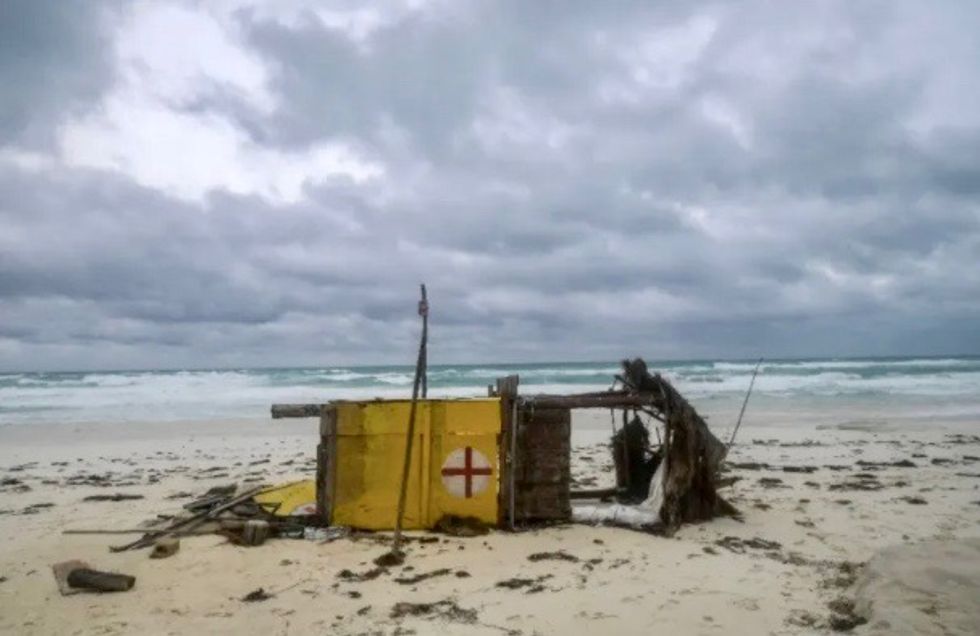 Hurricane Delta regained strength as it headed towards the United States early Thursday after lashing Mexico's Caribbean coast, where some tourists complained about conditions in crowded emergency shelters during a pandemic.

There were widespread power outages after Delta slammed into the Yucatan Peninsula in southeast Mexico as a Category 2 storm, toppling trees and ripping down power lines.

The region appeared to have escaped major destruction and there were no reports of deaths as the storm headed out into the Gulf of Mexico where it weakened to Category 1 as it churned towards the US Gulf Coast, before regaining its Category 2 status.

In an update at 0600 GMT Thursday, the US National Hurricane Center (NHC) said Delta was packing maximum sustained winds of 100 miles (155 kilometers) per hour and moving at about 17 mph (28 kph) about 485 miles (780 kms) off the coast of Louisiana.

Earlier strong winds whipped Cancun, one of Mexico's most popular tourist destinations, where cars were hit by falling trees, street signs were blown over and stores were damaged, according to AFP reporters.

Thousands of tourists hunkered down in emergency shelters along the Riviera Maya coastline as the storm blew through, prompting concerns about the risk of exposure to the coronavirus.

"They took us into an abandoned building, no heat, no air conditioning, no fans, no kind of ventilation at all," said 42-year-old American tourist Nick Fifis.

"The staff are trying to help everybody, but there's a mess. No masks, no social distancing. It's just not safe," he said.

Mandy Sears, however, said she was just glad to be out of danger from the storm.

"Were we comfortable? No, but we were safe. Our experience has not been excellent, it has been miserable. But this is a catastrophe. We knew we were coming during hurricane season," said the 47-year-old from the United States.

Delta was downgraded from an "extremely dangerous" Category 4 as it neared the peninsula, but is expected to become a major hurricane again as it moves over the Gulf of Mexico, the NHC said.

On Friday the storm is expected to approach the northern Gulf Coast of the United States, where a hurricane watch has been issued for an area from High Island, Texas to Grand Isle, Louisiana, it said.

A "life-threatening storm surge and damaging winds" are increasingly likely along parts of the northern Gulf Coast, it added.

At least 6,500 soldiers were deployed across the region to help affected communities, authorities reported.

Troops were seen removing tree branches and other debris, while residents used machetes to clear roads.

More than 40,000 mostly Mexican tourists in Cancun and neighboring resorts were evacuated as the hurricane approached, the head of the area's hotel association, Roberto Citron, told AFP.

In Cancun alone, more than 160 shelters were set up.

The authorities said the emergency shelters had been sanitized and masks were being used to prevent the spread of the coronavirus, which has killed more than 81,000 people in Mexico and led to a sharp drop in visitor numbers.

But some tourists said that was not the case.

"Nobody is wearing masks, (everyone is) laying on floors, there's no air conditioning, no fans, there's no circulation of air," said Janet, a 67-year-old from the United States who declined to give her last name.

Over the weekend, six people died and thousands were forced from their homes as Tropical Storm Gamma triggered floods and landslides in southeastern Mexico.