If there’s another Trump term the FBI will turn into the ‘Ministry of Truth’ for his foes: ex-FBI agent 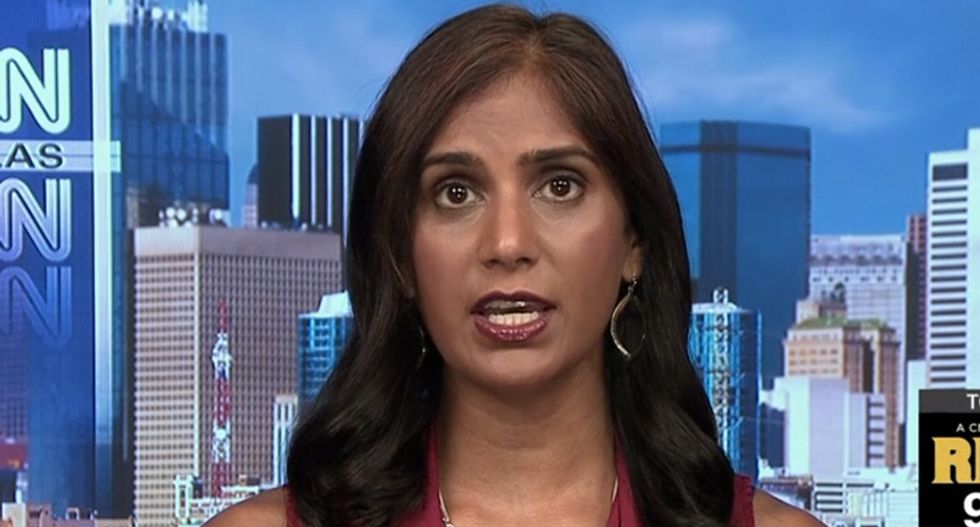 Former FBI Agent Asha Rangappa anticipates President Donald Trump would turn the FBI into the "Ministry of Truth" if he's reelected next week.

Writing in the Washington Post, the Yale University senior lecturer explained that the president has repeatedly lashed out at FBI Director Christopher Wray and Attorney General Bill Barr for refusing to prosecute former President Barack Obama and former Vice President Joe Biden ahead of the election. Trump alleges that they "spied on my campaign," but has failed to produce any evidence to support it. When Barr appointed a special prosecutor to look into the matter, nothing was found that he could prosecute.

"Trump has also allegedly discussed firing Wray after the election as a result," Rangappa wrote. "Trump’s obsession with the appearance of criminality — rather than any real evidence of substantive wrongdoing — is a window into how he will further weaponize law enforcement for his own political ends if he wins a second term."

Trump claims to be the "law and order" candidate, but when it comes to following the law and agreeing to order, the president struggles.

"Trump’s view of law enforcement as political spectacle — one in which perception, rather than reality, is all that matters — can be traced back to his initial interactions with [former FBI Director James] Comey starting in January 2017," Rangappa explained.

Comey recalled repeated interrogations from the president and frequent demands for "loyalty." Trump demanded Comey announce there was no investigation into Trump after it was discovered he had improper contacts with Russia. When Comey wouldn't do it, Trump went to San Coats, the director of national intelligence at the time, as well as Mike Rogers who was the director of the National Security Agency.

"These actions reveal that Trump believes that guilt or innocence isn’t about what a jury decides in a courtroom, but about what is announced publicly in the court of public opinion," wrote Rangappa. "This was echoed in the sequence of events that led to his impeachment: The president’s focus in his call with Ukrainian President Volodymyr Zelensky was whether Zelensky planned to 'announce' an investigation into the Bidens — preferably on a widely watched (and apparently, in Trump’s view, credible) news network, like CNN. More than looking for the fruits of any such investigation to help him, Trump believed that the mere cloud of suspicion — especially coming 'independently' from a third party, like Ukraine — would do the trick."

In a second term, things could become more dangerous, particularly if Trump fires the FBI director and install one of his own flunkies.

"Trump’s concern with the appearance of criminality means that a future FBI toady could 'announce' investigations of Trump’s opponents whenever it is politically convenient, and on Trump’s deadlines, without ever bringing any charges (or even pursuing them in the first place)," she continued. "With an FBI willing to prop up his imaginary investigations, Trump would have endless fodder not only to substantiate his claims of criminality against his political opponents, but also to gin up fear against so-called domestic terrorists like Antifa, or provide 'proof' of a system rigged against him through things like widespread voter fraud. For now, those claims have not gained traction outside right-wing circles because of Wray’s public statements to the contrary."

Under Wray, the FBI hasn't been willing to confirm Trump's conspiracy theories, but that could change if Republican Senators allow Trump to get away with appointing someone like Don Jr. as his replacement.

With such a "yes man," the most powerful federal law enforcement agency could acquiesce to anything the president demands.

"And when it comes to his enemies, the danger won’t be that Trump will actually 'lock them up' — it’s that he won’t even bother trying, instead conveniently keeping his opponents under a perpetual cloud of suspicion," Rangappa closed.

On Twitter, she called it a kind of "Ministry of Truth," a fictional department for propaganda in the George Orwell book 1984.