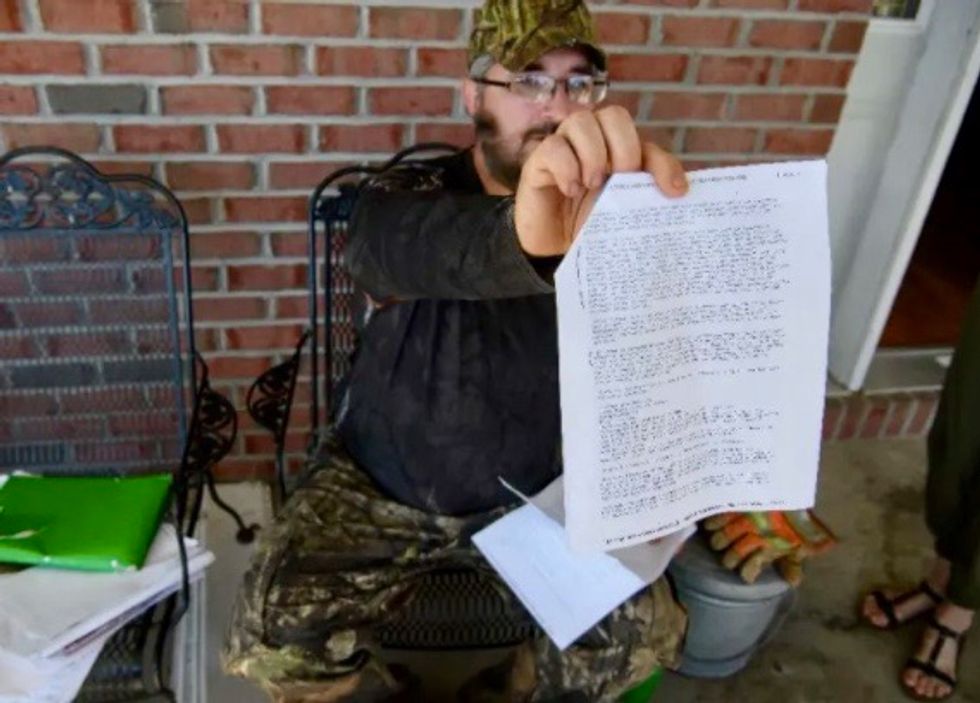 Farmer Bryan Latkanich shows a toxicology report for his son during an interview at his home in Deemston, Pensylvania (AFP)

Bryan Latkanich says he was once "the biggest cheerleader there was" for the fracking industry -- but now blames gas wells for destroying his southwestern Pennsylvania farmhouse and his family's health.

Retired teacher Rose Friend, whose family has owned a home in the area for generations, says gas producers cut down her century-old trees and made her life miserable with dust and noise pollution from never-ending lines of trucks trundling through her property.

Despite their personal nightmares, both say they'll vote November 3 for Donald Trump, who has positioned himself as a champion of hydraulic fracturing, as well as fossil fuel energy generally.

Their cases illustrate some of the complexities around a debate that is center stage during the 2020 US presidential election, even as some residents of the country's most heavily fracked region have soured on an industry that had promised economic revival.

"I was completely down and out when they come in and say: 'Hey, you're a millionaire,'" Latkanich, 49, said about an early meeting with Atlas America, later bought by Chevron.

He'd just had brain surgery for a tumor that left him blind in one eye, was going through a divorce, and had lost his job, when he was told gas deposits on his land could fetch him $13 million.

Bryan first noticed problems in 2013, when he gave his son a bath, only to find burns all over the child's body.

Latkanich is now deeply critical of fracking, but will still vote Trump, because "I believe in gun rights and protections."

"I am anti-abortion, that's one of the big things -- I do not believe in killing babies," the 83-year-old said.

Fracking -- gas and oil extraction from deep underground rock using an injection of water and chemicals -- boomed in the mid-2000s thanks to new technology.

By 2014, it made the US the world's biggest oil and gas producer.

But its costs are high: the drilling triggers earthquakes, while research links its air emissions and water contamination to myriad health problems.

Then there's global warming. While methane is the cleanest burning fossil fuel, it also leaks out from drilling wells and becomes a highly potent greenhouse gas.

In Washington County, home to over 1,600 fracking wells, many residents welcomed the promise of economic renewal in the wake of the coal industry's demise.

Professional dancer Lois Bower-Bjornson, 55, returned to the area to raise her family around the time the boom began.

She realized she had to act when holding ponds of waste liquid burned for weeks on end and the sight of gas flares lit up the neighborhood.

The area's water supply meanwhile is above radioactive levels -- a result of fracking contaminants like radium dumped into landfills that get sent to water treatment plants and back to the Monongahela River.

Despite her vehement opposition to the industry, she and many other Democrats in the area want better regulation instead of a ban, dubbing it politically unfeasible.

An exhaustive grand jury investigation published this summer agreed, with the state's attorney general declaring the industry was given a "free pass."

Nonprofits have had to fill the gap.

On an unusually hot October day, Leann Leiter of Earthworks points a $100,000 infrared camera at a fracking pad just 500 feet from the home of former coal miner Dale Tiberier, looking for invisible emissions.

After a years-long legal battle, the site is no longer leaking dangerous chemicals, to everyone's relief.

Once a Democratic stronghold, Washington County has voted red in recent years, with local Republicans crediting fracking for their strong showing.

"We have the energy under our feet to power America, and that energy has allowed our economy to flourish," said Diana Irey Vaughan, one of the county's three elected commissioners.

Precisely how many jobs fracking supports is contested -- the industry cites analyses placing the statewide figure at half a million when including "induced" jobs -- though official estimates say it's just 26,000.

And even before Covid-19 triggered a global oil crash, fracking was in the midst of a major downturn that proved the industry was grossly overvalued, according to veteran business journalist Bethany McLean.

Another point of contention: whether shale drilling was responsible for a 40 percent hike in an extremely rare pediatric cancer seen in the region in recent years.

But for Alison Steele of the Southwest Pennsylvania Environmental Health Project, such arguments mirror those used by the tobacco industry in decades past.

"When you look at trends around health impacts, and the proximity of people experiencing those impacts to well pads, the numbers are really astonishing," she said.