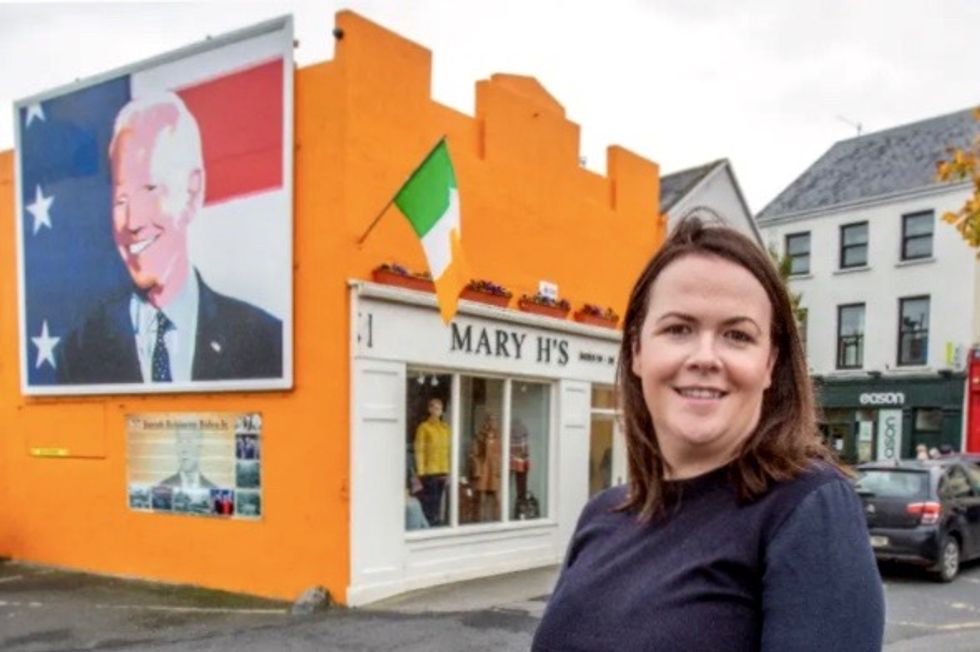 Laurita Blewitt, a cousin of US presidential candidate Joe Biden

Thousands of miles east of the White House in Ireland, a pop-art portrait of US presidential candidate Joe Biden towers over his ancestral hometown of Ballina, County Mayo.

In the town on Ireland's rugged Atlantic coast, the Democrat's distant relatives are thrilled to have one of their own bidding for America's highest office.

She has traced his lineage to east-coast County Louth and Ballina -- a town of 10,000 people, which is dotted with brightly colored shopfronts and bisected by the River Moy.

In 1851, Biden's great-great-great-grandfather Edward Blewitt joined the legions of Irish fleeing famine and poverty for a fresh start in New York.

The mural was raised by a band of locals last month, and Ballina is twinned with Scranton, Pennsylvania, where Biden was born in 1942.

The 77-year-old politician has visited twice -- first in 2016 when crowds turned out to see president Barack Obama's deputy.

In 2017 he came back and turned the first sod for a new regional hospice -- a cause near to his heart after his son Beau's death from cancer two years earlier.

Biden wrote that when he dies, "northeast Pennsylvania will be written on my heart".

"But Ireland will be written on my soul."

He is mining a rich tradition of American statesmen touting Irish heritage.

In the 20th century, John F. Kennedy was most closely tied to the "Emerald Isle", and had to overcome anti-Irish, anti-Catholic prejudice to win the White House.

But others including Richard Nixon, Ronald Reagan and Barack Obama have all claimed ancestral links to Ireland.

Ten percent of Americans claim Irish heritage -- a 31-million-strong bloc vastly larger than the five-million population of Ireland itself.

Those links helped give Washington an intermediary role in resolving the 30-year "Troubles" in Northern Ireland, a sectarian conflict that killed 3,500 in Ireland and the British province itself, before it largely ended in 1998.

US politicians have stepped in, warning London that a post-Brexit UK-US trade pact could be at risk if the peace is undermined.

Their alarm has reportedly been stoked by energetic briefing by the Irish embassy in Washington.

"The connections between Ireland and the US are incredibly strong," said Ballina local councillor Mark Duffy.

"It is that soft power," he added. "Ireland does definitely punch above its weight on the international stage."

Thinking of their ancestral homelands, Irish-Americans may evoke a lush green idyll of tight-knit communities.

But in the midst of a bitter US election campaign between Biden and President Donald Trump, America's own divisions have spilt over into the Irish countryside.

Biden's third cousin Joe Blewitt -- a local plumber -- decorated his van with a tongue-in-cheek reference to the campaign: "Joe Biden for the White House and Joe Blewitt for your house."

He received hate messages and one harassing call from a private number where an American voice told him: "Trump is going to be president."

"There is an awful lot of hatred," the 41-year-old mused.

Laurita Blewitt travelled to Las Vegas to canvas for Biden during the Democratic primary process in February.

"Any time I visit the States now it's not like that friendly, open, welcoming place that it used to be," she said.

But she said after four years of a Trump presidency that has upended all political conventions, a Biden victory next month may provide "a little bit more normality", both at home and abroad.

"Hopefully we'll be able to celebrate in style here on the third of November," she grinned.