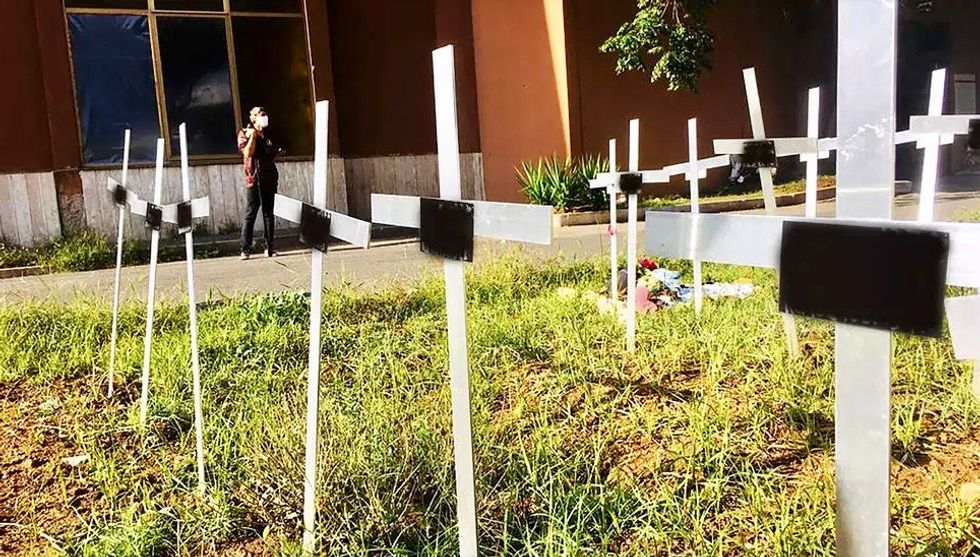 Small crosses made of wood and metal fill Lot 108 of Flaminio Cemetery in Rome, some painted white, some askew or fallen to the ground, all carrying female names.

The discovery of the named graves last month by a woman who had undergone an abortion provoked outrage from women's rights groups and the women involved, who denounced the public exposure of personal medical choices.

"To think that someone appropriated her body, that a rite was performed, that she was buried with a cross and my name on it, was like reopening a wound," Francesca, one of the many women affected, told AFP.

"I feel betrayed by the institutions."

The group Differenza Donna (Woman Difference) said it had been contacted by about 100 women who underwent abortions at hospitals in the city.

The activists are scheduled to meet the health minister next week and have petitioned the public prosecutor's office to open an investigation.

Italy's privacy watchdog has also opened a probe into the practice, which appears for now to be a bureaucratic procedure gone awry.

The scandal first came to light last month after a woman who had an abortion -- at a hospital different from the one used by Francesca -- discovered her name on a cross at the cemetery and posted on Facebook, a message that soon went viral.

Elisa Ercoli, president of Differenza Donna, described the discovery as the latest slap in the face for women in the majority Catholic country, calling it an "ugly, authoritarian act".

Abortion within the first 90 days of pregnancy has been legal in Italy since 1978, but the law allows for conscientious objectors among medical professionals.

Seven out of 10 gynecologists in the country refuse to carry out the procedure, complicating access to abortions for women in some areas.

Ercoli told AFP the group had found crosses bearing women's names from 2017 to 2020 at the cemetery and learnt that the practice has been going on since at least 2005.

A similar practice was subsequently discovered at a cemetery in the northern city of Brescia.

A national law from 1990 calls for fetuses less than 20 weeks old to be incinerated by the hospitals.

But hospitals can entrust fetuses aborted after 20 weeks to cemetery services for burial even without the consent of family members.

While hospital permits required for transport and burial of the fetuses can include women's personal data, those records are supposed to be kept confidential.

Rome's municipal waste disposal and street cleaning agency AMA, which also manages the capital's cemeteries, said after the first woman posted on Facebook that the fetus was buried "after specific input from the hospital where the intervention took place".

AMA had "no role in such decisions", it said.

AMA did not respond to AFP's requests for more detail.

Francesca, who did not want to provide her last name, said she chose to undergo an abortion last September in the sixth month of pregnancy after learning her child had a serious heart defect.

She said she remembered signing papers given to her at the hospital as her contractions became stronger just before her delivery, but said she did not read them.

After the abortion, Francesca said she asked about what would happen to the fetus three times, without receiving any answers, adding that it was not only a shock to discover the grave but also to see the cross, which she said did not correspond to her beliefs.

In Italy, children are automatically given their father's last name upon birth.

"But if a woman has an abortion, her name and surname are included," Francesca noted.

"Finding my name on the cross was a sign of punishment for me."