Jeff Sessions was a ‘driving force’ behind child separations – but Rod Rosenstein said they should include infants: NYT 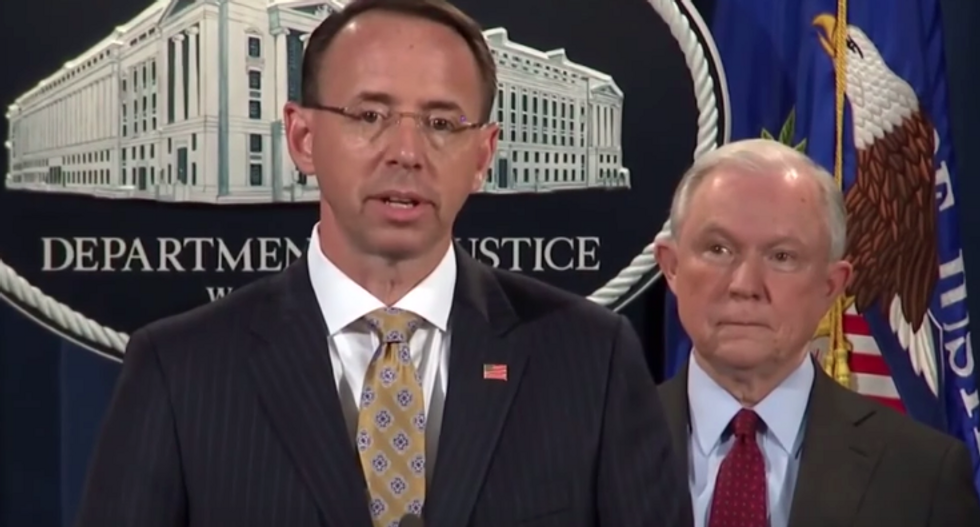 As Attorney General under President Donald Trump in 2018, Jeff Sessions ordered the separation of migrant children from their parents and even other siblings. Rod Rosenstein, who would go on to gain a high profile under the Mueller Russia probe, was a complicit partner in that project.

“We need to take away children,” Attorney General Sessions told five federal prosecutors who were “deeply concerned” about the child separations, The New York Times reports.

"One added in shorthand: 'If care about kids, don’t bring them in. Won’t give amnesty to people with kids.'"

Rod Rosenstein, the the deputy attorney general at the time, "went even further in a second call about a week later, telling the five prosecutors that it did not matter how young the children were. He said that government lawyers should not have refused to prosecute two cases simply because the children were barely more than infants."

According to The Times, Sessions and Rosenstein "were 'a driving force' behind the policy that spurred the separation of thousands of families, many of them fleeing violence in Central America and seeking asylum in the United States, before Mr. Trump abandoned it amid global outrage, according to a draft report of the results of the investigation by Michael E. Horowitz, the department’s inspector general."

That was behind the scenes. Sessions, who recently lost a primary bid to retake his old Alabama Senate seat, was only too happy to allow Homeland Security Secretary Kristjen Nielsen to take the brunt of the international outrage.

The Times reporting is based on interviews with federal government officials and a review of an a 86-page draft Inspector General's report.

"Mr. Rosenstein told the inspector general that Mr. Sessions 'understood what the consequences were.'"

“The A.G.’s goal,” Rosenstein said, “was to create a more effective deterrent so that everybody would believe that they had a risk of being prosecuted.”