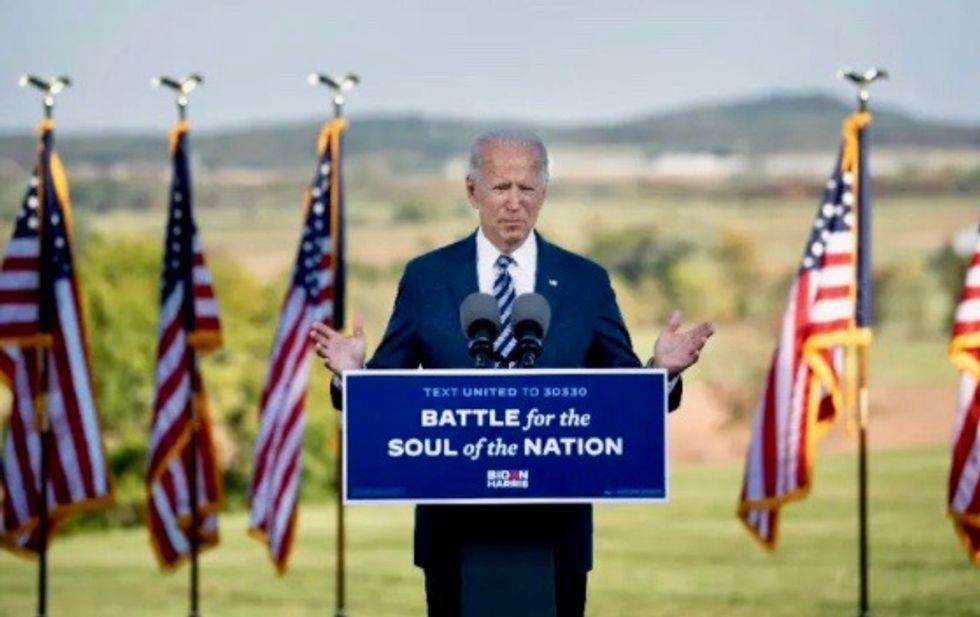 White House hopeful Joe Biden warned on Tuesday that "the forces of darkness" are dividing Americans, stressing that as president he would strive to "end the hate and fear" consuming the nation.

In a speech at the site of the famous Civil War battle of Gettysburg, the Democratic challenger to President Donald Trump in November's election condemned the rise of white nationalism and said the country needed to unite.

The 77-year-old, who leads in polling four weeks from election day, made no mention of Trump's name, but the Democrat's remarks notably came one week after the president failed to directly condemn white nationalism during their contentious debate in Cleveland.

Biden's speech was intended to serve as a call for unity after months of bitter divisions, but he also said he was "concerned" about what he sees today in America.

"The country is in a dangerous place, our trust in each other is ebbing, hope seems elusive," and politics is no longer a forum for mediating differences but a battleground for "total, unrelenting partisan warfare," he said.

"Instead of treating each other's party as the opposition, we treat them as the enemy. This must end," Biden added.

'Has to drive him crazy!' Florida prosecutor says Trump must be furious after Mar-a-Lago insider 'spilled the beans'

During an appearance on MSNBC's "Morning Joe," Palm Beach County State Attorney Dave Aronberg suggested that there was no way that the Department of Justice would have sent FBI agents to search Donald Trump's Mar-a-Lago resort unless they already "had the goods" on him.

Speaking with co-host Mika Brzezinski said he owed an apology to Attorney General Merrick Garland based on the turn of events this past week as the DOJ closes in on the former president.