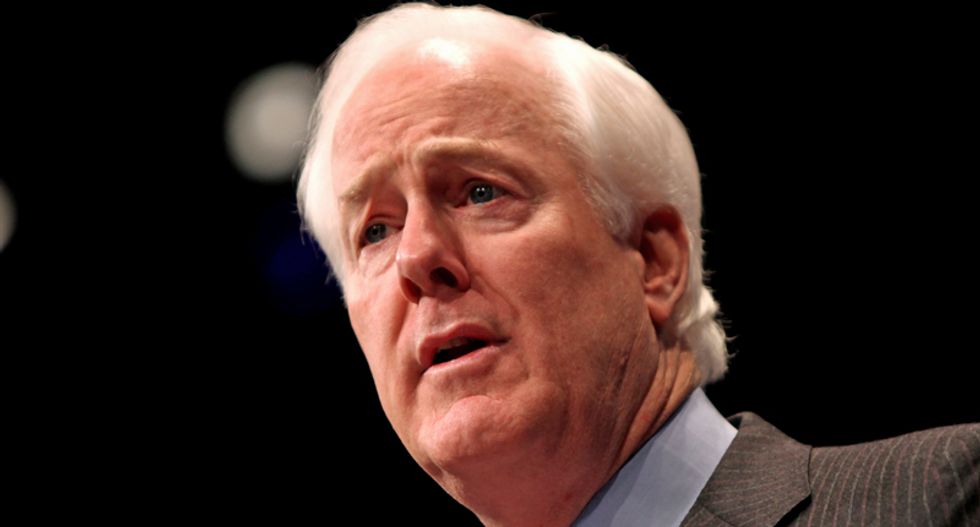 For almost the entire election cycle, U.S. Sen. John Cornyn's massive financial advantage had reassured Republicans across Texas as they dealt with mounting challenges on other parts of the ballot.

Now, with less than two weeks until the election, Cornyn's fortunes have dramatically changed.

His once-staggering cash-on-hand advantage — 16-to-1 earlier this year — is gone, he is confronting a late surge in outside Democratic spending and his challenger, MJ Hegar, has been outspending him on TV for a month.

Polls continue to give Cornyn various single-digit leads, but the 11th-hour action is making for a fluid, uncertain finale.

"He's got some problems, and let me tell you how happy I am that we're at a point where these problems are his because for so long, for 18 years, Texans have had problems that he's overlooked," Hegar said Wednesday in an interview with The Texas Tribune. "That's why he's in trouble."

While Republicans are on alert over the late Democratic investment, they remain optimistic that Cornyn is headed for victory in Texas, which has not elected a Democrat in a statewide contest in more than two decades.

"John Cornyn has always put the people of Texas first, and we have full confidence he’ll be re-elected in November," National Republican Senatorial Committee spokesperson Joanna Rodriguez said in a statement. "In her desperation to stay relevant these last couple weeks, [Hegar]’s hypocritically relying on the very dark money she’s allegedly opposed to. Voters will see right through it."

Cornyn's campaign has taken a similar line, saying Hegar "has completely abandoned her principles" in response to news of the last super PAC splurge on her behalf.

A Quinnipiac University poll released Wednesday gave Cornyn a lead of 6 percentage points, though Quinnipiac polling analyst Tim Malloy said in a news release that "there are still two weeks to go, and you can't count Hegar out." He elaborated in an interview, saying that assessment was based on the potential impact of late spending, especially as it looks increasingly like the Senate majority is on the line.

"In the final two weeks, a lot of money comes flying into these races that are so close and so consequential," Malloy said. "Obviously the Cornyn race is huge — beyond Texas."

The first major warning sign for Cornyn came late last month, when Hegar announced she raised over $13.5 million in the third quarter, nearly eight times more than her previous best three-month period. She ended up hauling in $14 million for the quarter, nearly double the amount Cornyn raised.

More significantly, though, Hegar eliminated Cornyn's long-running cash-on-hand advantage, entering the final full month before the election with $8.5 million in reserves to $8 million for Cornyn. It was a remarkable turnabout after Cornyn emerged from the prior quarter with $14.5 million in the bank to under $1 million for Hegar.

The next campaign finance report in the race is due Thursday, and it covers the first two weeks of the month. Neither Cornyn nor Hegar has released numbers in advance, though Hegar is expected to have raised multiple millions of dollars in the short period.

Part of the reason Cornyn's wide cash-on-hand lead evaporated was due to how much he spent in the third quarter — $13.7 million, doubling Hegar's expenditures. The overwhelming majority of Cornyn's spending was on "media" or similarly labeled costs, indicating he may have been locking down TV time for the fall.

But with early voting underway in the Nov. 3 general election, Hegar has been consistently outspending Cornyn on TV, beating him for the past four weeks and outpacing him by more than 2-to-1 over the last two weeks, according to ad-tracking data reviewed by the Tribune. During the most recent week, Hegar's campaign benefited from joint TV spending with the Democratic Senatorial Campaign Committee, while the Cornyn campaign's TV buys have been boosted by the state Republican Party.

Third-party spending has also become a problem for Cornyn.

Last week, the top Democratic super PAC in Senate races, Senate Majority PAC, announced it was plunging into the contest with an $8.6 million TV ad buy against Cornyn. On Tuesday, another Democratic super PAC, Future Forward USA, suddenly went up on TV in the race and disclosed to the Federal Election Commission that it was dropping an estimated $3.9 million on the election for now.

Even more concerning to Cornyn is that the last-minute offensive appears to be part of a coordinated ambush. Recode reported Tuesday that a coalition of Democratic groups, including Senate Majority PAC and Future Forward, was plotting a $28 million infusion into the race for the last two weeks. About $10 million was expected to come from Senate Majority PAC, which announced its $8.6 million buy Thursday, while the rest was still being raised as of last week, according to Recode.

Future Forward is a relatively new super PAC that has been spending heavily in the presidential race as it reaches its end. The group's top donors include some of Silicon Valley's biggest players, such as Facebook co-founder Dustin Moskovitz and ex-Google CEO Eric Schmidt.

It remains to be seen what Future Forward's full spending plan is for the closing days of the Cornyn-Hegar battle. A person who picked up at a phone number affiliated with the super PAC Tuesday declined to comment, and the group's president, Chauncey McLean, has not responded to emails.

There is a super PAC supporting Cornyn, Texans for a Conservative Majority, though it has not had the kind of money to keep up with the Democratic outside groups. As of Wednesday, it had disclosed spending $3 million on advertising in the race since mid-September, all in opposition to Hegar.

Cornyn's campaign responded to the investments by Senate Majority PAC and Future Forward by accusing Hegar of hypocrisy when it comes to big money in politics as well as "dark money," or funding whose sources are unknown. Two of Future Forward's top funders this election cycle have been two nonprofits, Future Forward USA Action and the Sixteen Thirty Fund, who do not have to disclose their donors.

“This is a defining moment that shows exactly how untrustworthy her word really is, and how willing she is look the other way so long as she personally benefits," Cornyn spokesperson Krista Piferrer said in a statement responding to the Recode story.

Hegar said in the interview with the Tribune that she sees a "huge difference between people spending to try to protect democracy and John Cornyn taking millions of dollars" from sources like the insurance industry. She noted she can control the type of donations her campaign accepts but cannot legally coordinate with groups like Future Forward.

Drawing a distinction with Cornyn, Hegar said: "One of us is endorsed by End Citizens United" — the Democratic group that advocates for campaign finance reform — "one of us is running on ending the corrupting influence of money in politics, and it ain't him."

Disclosure: Facebook has been a financial supporter of The Texas Tribune, a nonprofit, nonpartisan news organization that is funded in part by donations from members, foundations and corporate sponsors. Financial supporters play no role in the Tribune's journalism.