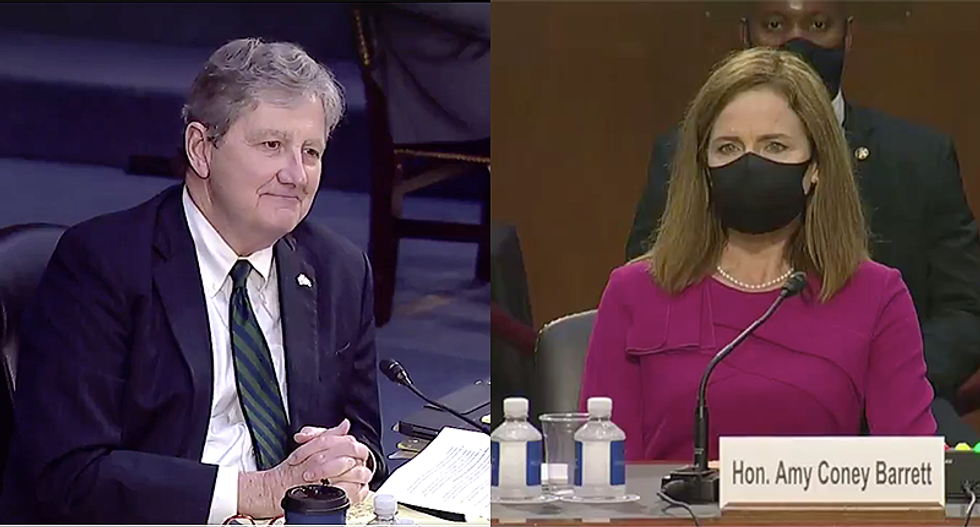 During the Senate Judiciary Committee hearing Monday, Sen. John Kennedy (R-LA) used the majority of his time to question Judge Amy Coney Barrett by bashing the hearing for accused rapist Justice Bret Kavanaugh and whined about being labeled a racist.

Kennedy didn't explain why he used his time to talk about everything other than Judge Barrett, but his conversation with her in 2017 may shine some light.

When questioning Barrett for her Circuit confirmation hearing, Kennedy asked her opinion on Griswold v. Connecticut, which ruled that it was not up to the government to decide whether people could buy and use birth control.

"I mean, when Griswold came down and you read it, what did you think?" asked Kennedy. "Did you say this is a well-reasoned opinion and I agree with it? Of course, you said you are going to follow it. We all follow the law. If you do not follow the law, you go to jail. Okay? I will stipulate that, too. But what did you think about the opinion?"

"I was not alive when Griswold came down," Barrett said.

"Well, what about when you first read it?" Kennedy pivoted to ask.

"Okay. I am going to move on. I get it. I do not agree with the position you are taking where you will not talk to me about the law, but if that is what you are going to want to do, that is your call. It is America. It is a free country," said Kennedy.