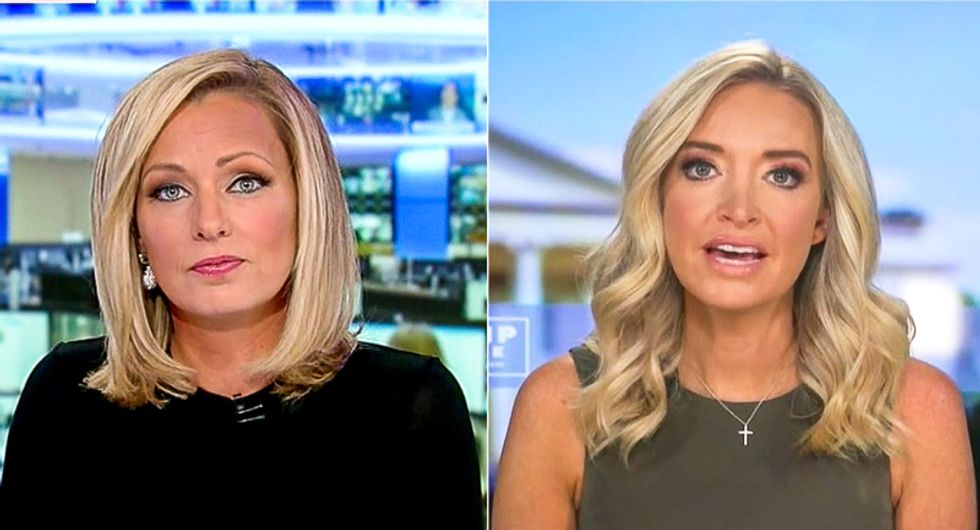 During an interview on Fox News, host Sandra Smith pointed out that COVID-19 positivity rates are rising in some of the states where Trump is holding campaign rallies.

According to Smith, positivity rates in Wisconsin have skyrocketed over the past two weeks.

"They're at a 28% positivity rate," the Fox News host observed. "More than one in four tests is coming back positive. In Nebraska, where the president will also visit today, a 21.5% positivity rate. So, does it help the president to continue to dismiss this virus and say that we're rounding the corner, Kayleigh?"

Smith suggested that Trump has an "opportunity to lay out a clear plan on how we're going to get rid of this thing."

"Yes, and he's shown us that plan," McEnany replied. "And his plan is working because, look, Sandra, the American public probably doesn't know this but if you look at hospital beds across the country, the percentage of hospital beds that are taken up by COVID patients right now are 6%. It's a testament to the president's therapeutics. If you are younger than 70, your chances of surviving this disease are 99%."

McEnany went on to call the president "brilliant" three times.

"The president in his brilliant debate performance offered a very clear choice to the American people," she said. "You can open safely with President Donald Trump or you can do Joe Biden, and he's modeling his COVID strategy, which is being locked in the basement."

Smith pressed: "Can you tell us any specific changes the president is considering to how we handle this virus as a promise to the American people that we're thinking this through, that we're finally get rid of this once and for all, even if the vaccine doesn't come in the next couple of months?"

For her part, McEnany said that the president's plan is to allow Americans access to the therapeutic drugs that he used when he became infected with COVID-19.

"We still feel that we're on track for a vaccine by the end of the year," she added. "Because we have a brilliant businessman as president."

"We need a businessman and a brilliant president like Donald J. Trump," McEnany concluded.