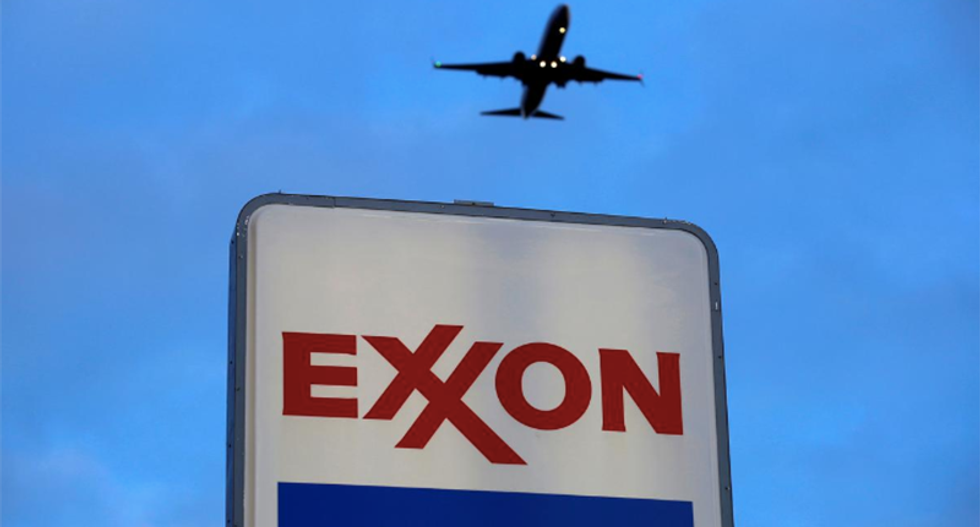 An airplane comes in for a landing above an Exxon sign at a gas station in the Chicago suburb of Norridge, Illinois, U.S., October 27, 2016. REUTERS/Jim Young/File Photo/File Photo

"To no one's surprise, Exxon is continuing to drive catastrophic climate change by putting profits before people and our planet," the advocacy group Food & Water Watch declared in response to the exclusive reporting by Bloomberg Green.

"What a slap in the face for fire-fighters, doctors, nurses, and frontline communities around the world," tweeted the nonprofit Avaaz. "The climate crisis is here, now—it's time for Exxon to wake up and smell the reality!"

ExxonMobil, whose own scientists knew about the threat its products posed to the planet a half-century ago, has not publicly committed to lowering oil and gas output or disclosed its forecast emissions—even as European oil majors like BP and Royal Dutch Shell have announced net-zero goals, Bloomberg notes.

According to the leaked materials obtained by the outlet, ExxonMobil's internal assessment of a seven-year, $210 billion investment plan adopted in 2018 by CEO Darren Woods shows the company's annual CO2 emissions increasing 17%—or 21 million metric tons—by 2025 compared with 2017.

These internal estimates reflect only a small portion of Exxon's total contribution to climate change. Greenhouse gases from direct operations, such as those measured by Exxon, typically account for a fifth of the total at a large oil company; most emissions come from customers burning fuel in vehicles or other end uses, which the Exxon documents don't account for.

That means the full climate impact of Exxon's growth strategy would likely be five times the company's estimate—or about 100 million tons of additional carbon dioxide—had the company accounted for so-called Scope 3 emissions. If its plans are realized, Exxon would add to the atmosphere the annual emissions of a small, developed nation, or 26 coal-fired power plants.

The projections are "an early assessment that does not include additional mitigation and abatement measures that would have been considered as the next step in the process," ExxonMobil told Bloomberg in a statement. "The same planning document illustrates how we have been successful in mitigating emissions in the past."

The company also recognized the impact of the Covid-19 pandemic while ignoring indications from within in the industry that oil demand may have already peaked. "As demand returns and capital investments resume," the oil giant added, "our growth plans will continue to include meaningful emission mitigation efforts."

These "self-help" measures, as the company documents calls them, include carbon capture and storage, efforts to reduce methane leaks and flaring, and the use of renewable energy. According to Bloomberg, without factoring in such projects, "Exxon's direct emissions in 2025 would surge to 154 million tons of CO2 equivalent—a 26% increase from 2017 levels."

Richard Brooks, a campaign coordinator at the advocacy group 350.org, responded to the reporting on Twitter, writing, "I'm not surprised by this but I hope, please, that this puts to rest any belief that institutional shareholders 'engaging' @exxonmobil to try to get it change its stripes is NOT GOING TO WORK. The company is going the opposite way on #climate."

Who are the shareholders who have been leading engagement of Exxon for years? The New York State pension fund… https://t.co/wA0Gu5habD
— Richard Brooks ☀️ (@Richard Brooks ☀️) 1601918057.0

Sharing a reaction from 350.org co-founder Bill McKibben—who said that "even among omnicidal oil companies, Exxon manages to stand out"—Senate Minority Leader Chuck Schumer (D-N.Y.) called the company's plans "outrageous" and highlighted the THRIVE Agenda, a proposed green recovery from the pandemic which he unveiled last month with other Democratic lawmakers as well as labor unions and progressive groups.

Greenpeace USA climate campaign manager Anusha Narayanan suggested that Twitter users "reply with this article every time you get a greenwashing ad from @exxonmobil."

Meanwhile, other climate action advocates pointed to the reporting as further evidence that Big Oil executives should be prosecuted.

we should probably arrest Exxon executives and put them on trial for crimes against humanity, in my opinion https://t.co/Xbd8okWJuk
— Rob (@Rob) 1601909044.0

Exxon understands and accepts the science of human-driven climate change. Despite that, the company is planning o… https://t.co/SklqYUBr9Q
— Walker Bragman (@Walker Bragman) 1601921109.0

"Exxon is conspiring to end life of this planet for the sake of profitable growth strategy," said Truthout's Candice Bernd. "This is a crime against humanity."

Bloomberg's exposé comes on the heels of a wave of lawsuits recently filed by local and state governments against fossil fuel giants, including ExxonMobil.

Writer Ketan Joshi noted a recent Oil Change International analysis that detailed the inadequacy of oil majors' climate pledges and charged that if they "were serious about the Paris agreement they would need to end new oil and gas exploration and extraction now and phase out production from existing developed reserves."

Climate scientist Peter Kalmus took aim at the fossil fuel industry more broadly, tweeting Monday that "these people are literally greed-blinded genocidal maniacs, and that includes all the majors, not just Exxon."