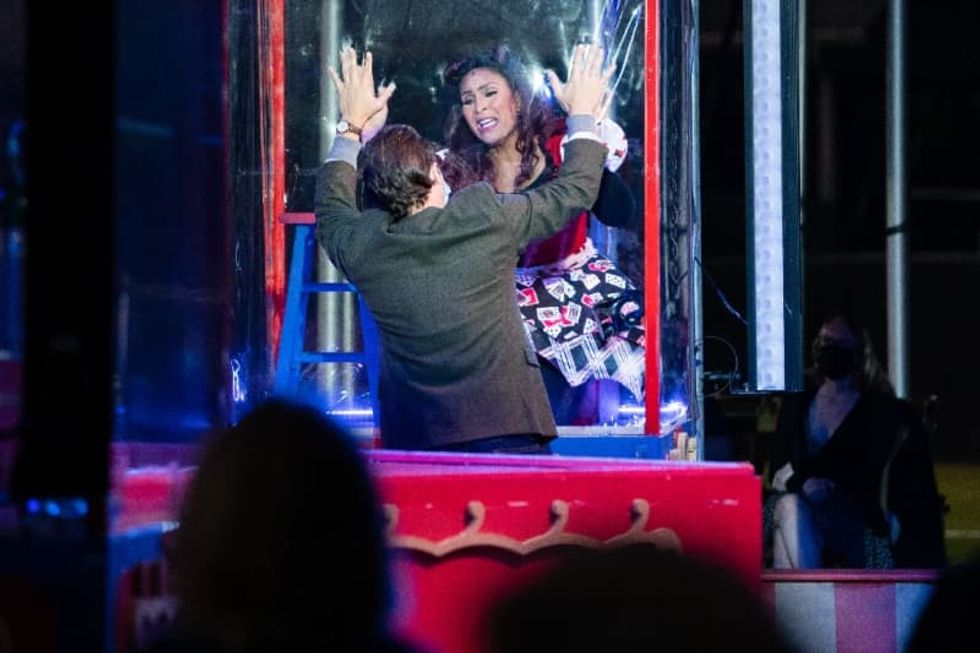 The life-art imitation question is age-old, but if 2020 has anything to say the answer is clear: even the fictional characters of our operas have developed Covid-19.

The Atlanta Opera premiered an outdoor series this week, set to run through mid-November, that features live performances of "Pagliacci" and "The Kaiser of Atlantis" under a circus tent on a baseball field, with scripts retrofitted for our virus-plagued times.

In the southeastern US city's version of "Pagliacci," an 1890s opera from Ruggero Leoncavallo, the jealous clown Canio contracts coronavirus.

"A world that is in the middle of a pandemic is a part of the storytelling," said Tomer Zvulun, the Atlanta Opera's director.

Performers sing and play instruments in plexiglass enclosures or wear masks, and the audience sits in four-person socially distanced pods.

The unique move meets a disastrous moment for the performing arts, whose halls have been closed for months and likely won't open soon.

But Zvulun emphasized the strategy was less about money -- in April the company slashed its $10 million budget by 34 percent and like everyone else, anticipates losses -- and more about adapting to a society in distress.

"We all are very grateful for those handheld devices and TVs, but there is no replacement for live performance."

It's most certainly not opera as usual: besides the masks and plastic boxes, the staging of "Pagliacci" sees new technologies onstage like Facetime deployed as well as centuries-old ones, with puppets allowing for some of the physical comedy.

The tweaks might turn some purists off, but for Michael Mayes, who plays the titular Kaiser in the run of the "Atlantis" opera, "what we're doing is incorporating something that's a major, probably permanent, part of our culture into the art form itself."

"As much as you may be sacrificing some of the more pristine elements of the art form, you are giving people something they can relate to," the South Carolina-based artist told AFP.

The safety protocols are strict: performers have undergone frequent Covid-19 tests, and Mayes said he and his wife rarely go anywhere besides rehearsals.

But it's worth it, the 44-year-old said: When the self-confinement period began, the notion of singing opera at home was too painful, as he watched his career screech to a halt.

"I've been in this business for 20-plus years and only in the past few have things really been viable -- I've been able to do what I wanted when I wanted and without fear of going broke every day," he said.

"When this thing hit, that anxiety returned in full force."

He and his wife turned to instrumental bluegrass as a "balm," and it wasn't until the Atlanta Opera came calling that he rediscovered his pipes.

"I missed it terribly," Mayes said. "Being able to be a part of the ensemble that's in the community and meeting the public where they are... it's been a real bright spot."

And singing behind a mask?

"The sound is different, but it's just as valid," he said.

"We as opera singers, who depend on the very nature of our instrument being acoustic and being unamplified and having to use our face as part of our toolkit... if we can do that, I think it's not so much to ask for folks to wear a mask when they go to the grocery store," Mayes continued.

"I think it's a good example of how you can incorporate masks and things into our culture, and not always look at it as some sort of terrible impingement on our freedoms -- hey, it's just part of reality now."