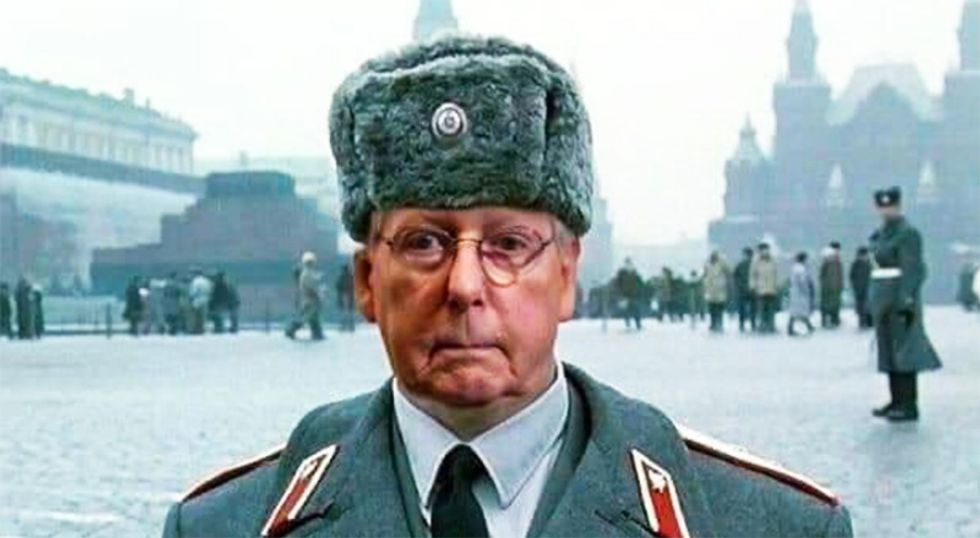 An old clip of Senate Majority Leader Mitch McConnell (R-KY) taking credit for the judge vacancies left behind by the Obama administration is putting the popular term "Moscow Mitch" back on the tip of everyone's tongues on social media Sunday. Below, see some reactions from the Twittersphere as #MoscowMitch and his GOP cohorts paint Democratic presidential candidate Joe Biden as someone who will "pack the courts" if elected.

McConnell tweeted Sunday, "The far left has been threatening our basic institutions of government since long before this Supreme Court vacancy. When today’s Democrats lose one election or one vote on the Senate floor, they start threatening to tear up the rulebook."

As Tomi T Ahonen Ruthlessly tweeted Sunday, "Remember Mitch McConnell the swamp creature McTurtle HATES to be referred to as Moscow Mitch - why? Because he took millions from Putin's richest oligarch, Oleg Deripaska. Putin OWNS the McTurtle. So remember to ALWAYS use term #MoscowMitch."

@senatemajldr #MoscowMitch doesn't care about the American people. He only cares about himself and his rich donors.… https://t.co/0kdppvGOo2
— Heidi (@Heidi)1602432240.0

in time for Halloween,,, the grim reaper of democracy. #MoscowMitch #vote him out #KentuckyProud @AmyMcGrathKY will… https://t.co/ps1ZZ1ShsO
— Lea Thompson (@Lea Thompson)1602434882.0

@realDonaldTrump @JudgeJeanine @tedcruz So, why are you packing it and the lower courts? Merrick Garland was block… https://t.co/s9yvAvc7hC
— D Villella ❄️ (@D Villella ❄️)1602381106.0