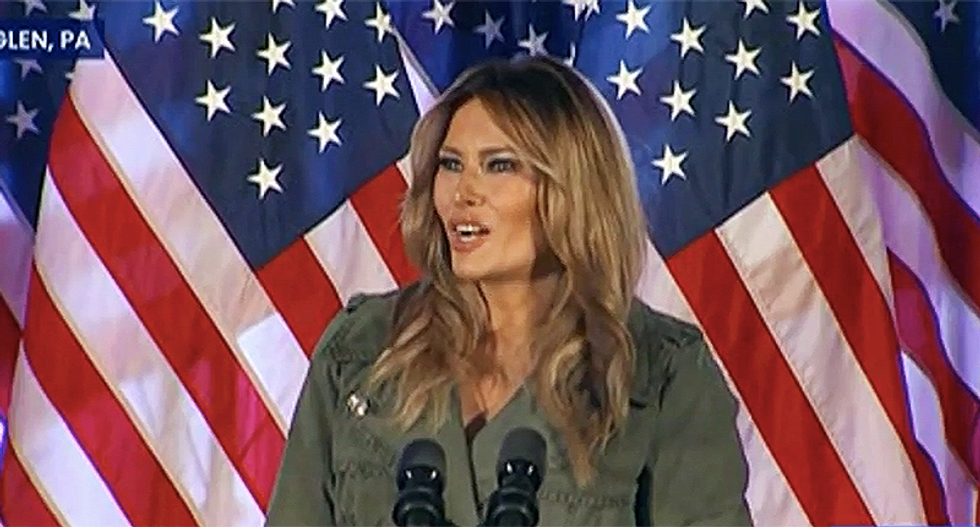 First Lady Melania Trump and the Log Cabin Republicans are pushing a dangerous lie that the President, Donald Trump, is pro-LGBTQ. Trump's record of working to destroy the hard-won rights and protections gained under the Obama administration is extensive, and his refusal to acknowledge or support LGBTQ people over the years is damning. In many real ways Trump has harmed LGBTQ people in this country. The fact is, Donald Trump is the most anti-LGBTQ president in modern history.

"Donald has been clear that gays and lesbians will be treated as he has always treated them: equally," Melania Trump says in a video (below) recorded for the Log Cabin Republicans, an organization that professes to advocate for LGBT conservatives. Supporting candidates who work to strip away rights and protections is not supporting the LGBTQ community.

The First Lady's claim is a stunning lie, unless the listener does backflips and turns themselves into a pretzel to try to twist the semantics to make "sense."

Here's the only way her claim could be marginally viewed as true: "Donald always treated gays and lesbians equally poorly."  (Note she does not say transgender people, whom he has treated even worse.)

"I was shocked to discover that some of these powerful people," the First Lady says of her husband's "many enemies in the political establishment," "have tried to paint my husband, as anti-gay or against equality. Nothing could be further from the truth."

That's a lie, plain and simple. See below.

"Donald is the first president to enter the White House supporting gay marriage," she says.

Trump has said that Obergefell is settled law, but he also made clear from the start he would appoint Supreme Court justices who would overturn that landmark ruling – and he has never pushed back against justices who say it should be overturned. He's also made clear he sees "traditional" marriage as superior, and has never done anything to support marriage equality.

In fact, "Trump has been a consistent opponent of marriage equality," the Human Rights Campaign says. "He said that he opposed it because he was a 'traditional' guy, choosing to support domestic partnership benefits instead. Trump later reversed himself and said he also opposed civil unions. Despite a brief flirtation with 'evolving' in 2013, Trump has consistently maintained his opposition to marriage equality, sometimes by citing polling and making an analogy to his dislike of long golf putters. After the Supreme Court ruling, Trump said the court had made its decision and, although he disagreed with the ruling, he did not support a constitutional amendment that would allow states to re-ban marriage equality. He later said he would appoint Supreme Court judges who would be committed to overturning the ruling."

"Donald is also the first president to appoint an openly gay official to his cabinet," she says, referring to Richard Grenell, who briefly served as Acting Director of National Intelligence, a position he, by law, was not qualified for.

Trump goes on to say gay conservatives and Log Cabin Republicans are being "silenced," "censored," and "bullied by cancel culture mobs."

"This is not the America any of us want to live in," she says, astonishingly hypocritically, given her husband's daily attacks on his opponents, and even on ordinary Americans.

In August Washington Post fact checker Glenn Kessler published an analysis on the "absurd claim that Trump is the ‘most pro-gay president in American history’."

The quote came from Richard Grenell, in a Log Cabin Republicans video from earlier that month.

So much for being pro-equality.