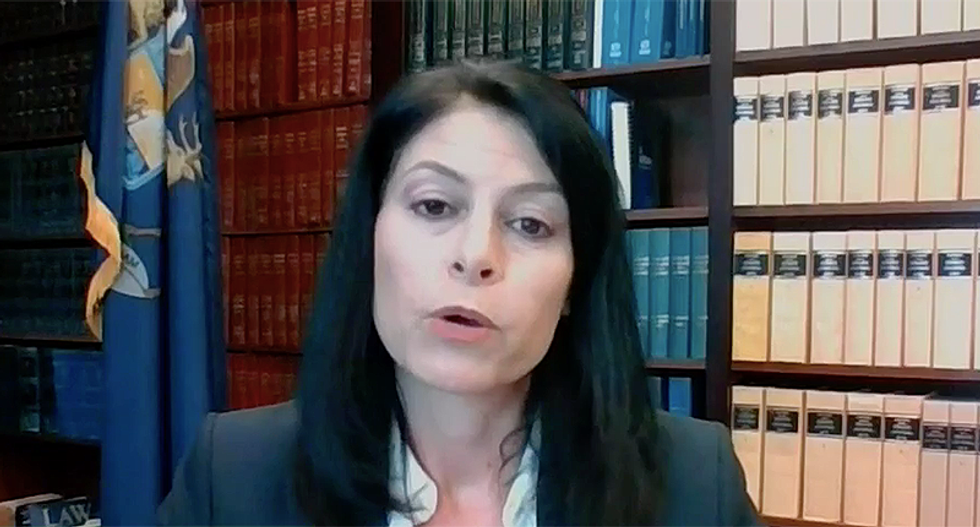 Michigan Attorney General Dana Nessel told MSNBC on Thursday that the the many militia members who were arrested for a domestic terrorist plot to violently overthrow the government and kidnap the governor could only "be the tip of the iceberg."

She explained that the men weren't merely angry people sitting around talking, they took steps to coordinate with other groups, test IEDs and outline a plot to carry out their actions.

"Any of those things could have happened at any time," she told host Katy Tur. Nessel went on to say that the politics of the men are clearly examples of extremism, something that Michigan has had in the past. She said for a while things were quiet, but recently in the past few years she has seen an increase in militia activity in the state.

"Things have escalated exponentially recently and first of all having a president that seems to condone these types of actions, certainly I would say more than dog whistles out there," Nessel said. 'I mean, very good people on both sides. And as you indicated before tweets to 'liberate Michigan.' What does that mean exactly? And, you know, calls to 'stand back and stand by' talking about the Proud Boys. So, this is a president that traffics in extremism."

She went on to say that she doesn't view these calls from Trump to be dog whistles, but it's "really a command to action more than anything."

"I see that in terms of our governor, what these groups often tend to do is they take advantage of moments of civil unrest and between the COVID epidemic and the Black Lives Matter protests, things have only escalated more and more and you see this hateful rhetoric against our governor for months and months and seen it enabled not just by the president but by other elected leaders in our state that call her a dictator, or use other very hostile language, towards her," Nessel continued. "I think that this is building up for a long time, the FBI has taken note of it and it was time to step in and to ensure that she did not lose her life and that we didn't have anybody else in our states potentially threatened either and time to move forward on these 13 different defendants."

Unfortunately, Nessel said that she is concerned "about additional threats" that could surface, particularly around the election.

"I will tell you this: this may very well be the tip of the iceberg," she also said. "I don't feel as though our work or the work of the federal authorities is complete. And I think there are still dangerous individuals that are out there. And it is a point of great concern and that's why I think it's so important that the elected leaders tone down the rhetoric and make it clear once and for all and to be unequivocal of the fact they don't condone and condemn these individuals and this type of conduct and these type of organizations."