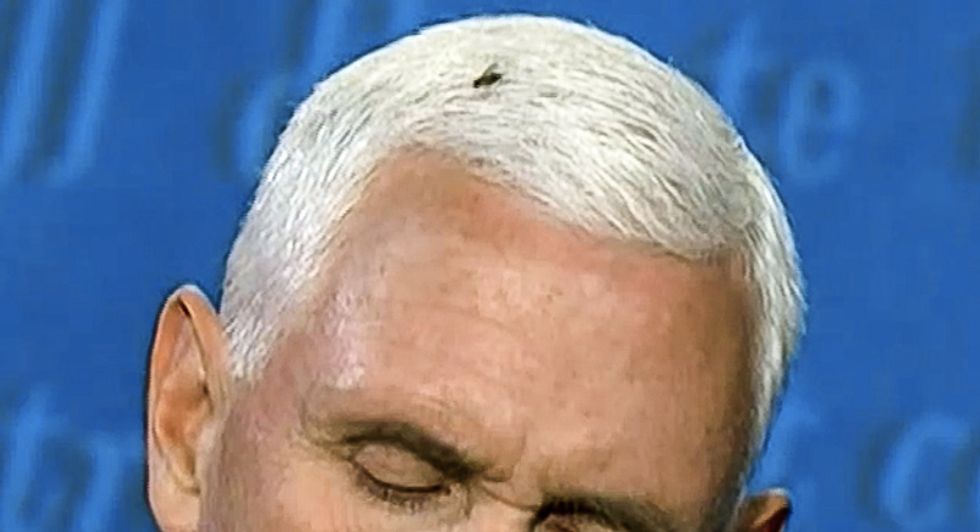 About halfway through the debate, a fly appeared to fly into Mike Pence's hair. It's unclear if the fly was stuck to his hair product or simply stayed for a short nap but it rested for several minutes as Pence shook his head from side to side.

It only added to the laundry list of unfortunate humiliations Pence faced on debate night. First, it appeared that he had pink-eye or something that could be coronavirus related, according to the Ophthalmology Times. Then reviews of Pence's debate performance weren't turning out well as his analysts claimed he was being smoked by Sen. Kamala Harris (D-CA).

It prompted many reactions. See them in the tweets and video below:

The fly on Pence's head was the perfect symbol of the moral and spiritual rot eating away at Pence's core as he off… https://t.co/TwXr3IBeO6
— Greg Sargent (@Greg Sargent)1602123887.0

Imagine Mike Pence going on Twitter after the debate to see what people thought of his ideas only to see over half… https://t.co/Qgn1WTBRRD
— Aero (@Aero)1602125022.0

The fly arrived right when the Vice President denied the existence of systemic racism. That is all. #VPDebate https://t.co/49P0AdSrpt
— Jan Schakowsky (@Jan Schakowsky)1602124858.0

There is a fly in VP Pence’s head. He is literally getting crapped on 😂 Flies are attracted to sh*t, bullshit.… https://t.co/Xczlbi7AGR
— Ariana Saunders (@Ariana Saunders)1602123729.0