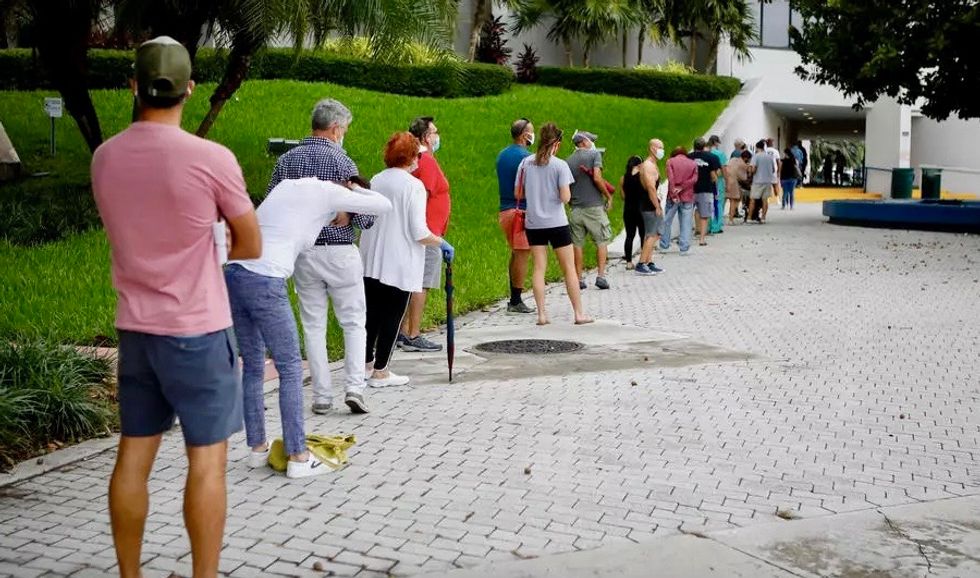 Americans wait in line to cast their ballots in Miami Beach on Florida's first day of early voting, barely two weeks before the tense US presidential election on November 3, 2020 Eva Marie UZCATEGUI AFP

More than 50 million Americans have cast ballots in the presidential election, an early-voting expert said on Friday, signaling a potential record turnout out for the Nov. 3 matchup between President Donald Trump and challenger Joe Biden.

According to Michael McDonald of the University of Florida's Elections Project, at least 51 million people had cast ballots in person or by mail 11 days before Election Day.

That is roughly 21% of all eligible U.S. voters. Some 137 million ballots were cast in the 2016 election, and McDonald and other experts predict that figure could be above 150 million this year.

The massive early-vote total gives the Republican Trump less leeway to change minds before voting concludes. Opinion polls show him trailing Biden, a Democrat, both nationally and in several battleground states that will decide who sits in the White House on Jan. 20, 2021.

Trump's handling of the coronavirus pandemic that has killed more than 221,000 people in the United States and cost millions their jobs has remained the key issue in voters minds.

In a reminder of the COVID-19's accelerated spread as winter approaches, researchers at the University of Washington's Institute for Health Metrics and Evaluation warned the virus could kill more than half a million people in the United States by the end of February 2021.

They said that roughly 130,000 lives could be saved if everybody wore masks, according to a study released on Friday.

Biden, 77, plans a speech in Delaware on Friday to discuss his plans to beat back the coronavirus pandemic. Biden said Trump, 74, has bungled the response and says he will listen to the advice of health officials and scientists, with whom Trump often feuds. Trump has defended his handling of the health crisis, saying the worst was over.

Trump, who was diagnosed with COVID-19 in early October and spent three nights in the hospital, mocks Biden for his cautiousness.

Trump has frequently assailed absentee voting, which is surging in the pandemic, as unreliable, and his campaign has fought states' efforts to expand a practice that analysts say is as secure as any other method.

Trump himself has voted by mail in past elections, but plans to vote in person in Florida on Saturday, the White House said. Vice President Mike Pence cast his early-vote ballot in Indianapolis on Friday morning.

Democrats have cast roughly 5 million more votes than Republicans so far, though their margin has shrunk in recent days, according to TargetSmart, a Democratic analytics firm.

Democratic analysts say they are cheered by those numbers but caution that they expect a late surge of Republican votes on Election Day.

"It's really, really hard to compare this to anything," Democratic strategist Steve Schale told reporters. "Everything's up from 2016."

Americans may find themselves waiting days or weeks to know who won as election officials count tens of millions of mail-in votes.

In Texas, a traditionally Republican state that has been growing more competitive, turnout has already reached 71 percent of the 2016 total, according to McDonald's figures. It has reached 50 percent in three southern battleground states: Georgia, North Carolina and Florida.

Election officials in battleground states like Pennsylvania are scrambling to minimize the possibility of a disputed outcome.

Both candidates have showered attention on Florida, where a Reuters/Ipsos poll this week found Biden moving into a slight lead after being in a statistical tie a week earlier.

Trump will begin his visit at the Villages, a sprawling retirement center. Trump won voters above the age of 65 by 17 percentage points in 2016, but polls show him running even or trailing Biden with senior voters this year in the state.

In the evening, Trump will hold an airport rally in Pensacola in northwestern Florida's heavily Republican panhandle, to urge supporters to vote early. Trump will spend the night in Florida before casting his vote in West Palm Beach.

Former President Barack Obama, with whom Biden served as vice president for eight years, will campaign in Florida on Saturday. Obama made his campaign-trail debut for Biden in Pennsylvania on Wednesday.

Biden entered the final days of the race with more cash than Trump. The Democrat raised about $130 million during the Oct. 1-14 period, about three times the roughly $44 million raised by Trump's campaign.