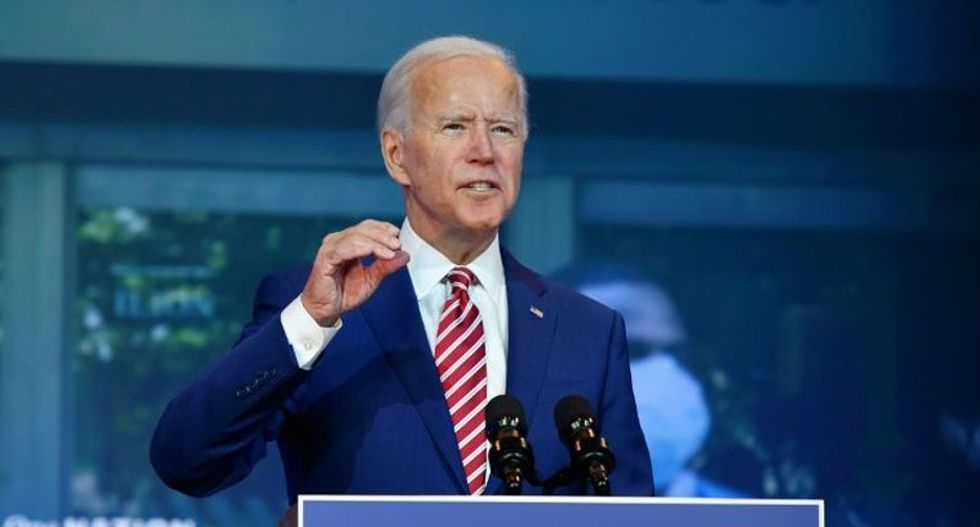 Mormons in the United States have traditionally been reliable Republican voters, but some members of the conservative church put off by President Donald Trump are switching sides and backing veteran Democrat Joe Biden.

Support for Trump among members of The Church of Jesus Christ of Latter-day Saints, which emphasizes family values and morals, is especially lagging among women.

Experts say that could have a significant impact in some key battleground states -- notably Arizona and Nevada, where Mormons represent six percent of the population.

"There are things about Biden that I don't agree with, but I think it's more important not to vote for Trump," said Melarie Wheat, a 36-year-old mother of five who lives in the western state of Utah, where the LDS Church is headquartered.

In 2016, Wheat voted for independent candidate Evan McMullin, who is Mormon, as she was put off by both Trump and his Democratic rival Hillary Clinton.

In the four years since, Trump has done little to change her initial opinion of him.

"I thought, well, maybe he'll get into office and he'll kind of tone it down and follow conservative policies and he'll be a good leader," she told AFP.

Like Wheat, many other Mormons are fed up with Trump's rhetoric and behavior, which is at odds with the church's teachings on sex, foul language, empathy and humility.

Last month, McMullin -- who in 2016 finished third in the election in Utah behind Trump, but not far behind Clinton -- urged his followers to back Biden.

"A word to my fellow principled conservatives and Republicans: Voting for Biden doesn't mean you agree with every position he holds or that you can't oppose decisions he makes as president," he said in a Twitter post.

"It just means that you're prioritizing the Constitution, truth & decency in this election."

Republican Senator Mitt Romney, one of the Mormon church's most famous members who has repeatedly clashed with Trump, also said this week that his party's incumbent leader did not have his backing.

"I did not vote for President Trump," Romney, who cast his early ballot in Utah ahead of the November 3 contest, told CNN -- while refusing to say if he had backed Biden.

Such a lack of enthusiasm among voters who belong to the LDS Church could very well tip the scale in Biden's favor in Arizona, where there are 400,000 Mormons and where Trump won in 2016 by just 91,000 votes.

Among those hoping for such an outcome is Dan Barker, a 67-year-old retired judge and lifelong Republican who, along with his spouse, founded Arizona Republicans for Biden.

"As a Christian, a member of The Church of Jesus Christ of Latter-day Saints, we think you should treat people with respect," Barker told AFP in explaining his aversion to Trump.

He said he was supporting Biden because the 77-year-old former vice president reflected Mormon values much more than the 74-year-old Trump.

"He's a person of faith himself and, compared to Trump, is a stronger role model for young people and adults alike," Barker said, adding that even Trump's policies on abortion could not change his mind.

"One of them, from my perspective, will build and strengthen our democracy, whereas the other, I think, if he continues on this path, will have an extremely negative impact on our democracy," Barker added.

Andrea Dalton, a 38-year-old resident of Tucson, Arizona, said many Mormons like her had initially believed Trump's promise to shake up the system.

However, in the last four years, "the shaking up turned into chaos," Dalton said.

"I think Trump has pushed a lot of people who wouldn't have pictured themselves voting for Democrats to do that," Dalton said.

"I see that in my own family. My stepdad was one of those Fox News watchers ... and he does not respect Donald Trump. He thinks he's a liar."

The darkness of Boris Johnson: a psychologist on the prime minister’s unpalatable personality traits

The Conversation
In all the chaos that characterises the administration of Boris Johnson, it’s sometimes difficult to understand why the prime minister behaves the way he does. Why does he never really apologise or admit mistakes?

Most recently, Johnson continues to insist that he did not know he was breaking any rules by having parties during pandemic lockdowns. It’s just the latest example of behaviour that, I would argue, can only be understood in terms of psychological factors.

First, let me be clear: I am not attempting to diagnose the prime minister with a personality disorder. Like many psychologists nowadays, I believe it’s too simplistic to think in terms of specific conditions like narcissistic personality disorder or sociopathy. I prefer to use the concept of a “dark triad” of three personality traits that belong together – psychopathy, narcissism and machiavellianism. This makes sense because these traits almost always overlap and are difficult to distinguish from one another. The traits exist on a continuum and are more pronounced in some people than others.