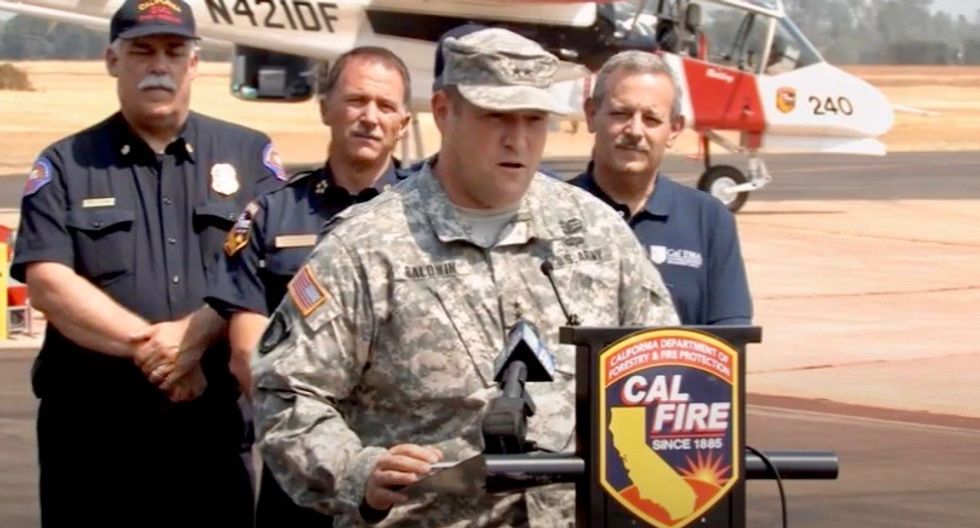 Residents of a Sacramento suburb were left scratching their heads and asking questions on Sunday following a report that a National Guard spy plane was deployed to the largely gated community—where the commander of the California National Guard resides—to monitor racial justice protests earlier this year.

A fourth RC-26 was dispatched to an unlikely location: the affluent Sacramento suburb of El Dorado Hills, where it—along with an Air National Guard Lakota helicopter—watched protesters below.

Critics wonder whether one specific detail might have something to do with the choice of El Dorado Hills: It's the hometown of California National Guard commander Maj. Gen. David S. Baldwin, who told the Times he couldn't remember whether he had personally approved the surveillance flight.

"There was a lot going on," Baldwin said. "We had 10,000 soldiers deployed. We were doing hundreds of mission taskings."

Baldwin insisted the fact he lived in the town "had nothing to do with" the deployment of the two aircraft, which, according to state records, was requested by the El Dorado County Sheriff's Office.

Like the overwhelming majority of Black Lives Matter and other demonstrations in the wake of the killings of Floyd, Breonna Taylor, Ahmaud Arbery, and other Black and Latinx people, the June 4 protest in El Dorado Hills was completely peaceful.

Critics are asking why, then, spy planes were sent to El Dorado Hills instead of somewhere such as Oakland, where deadly violence—allegedly committed by right-wing extremists—occurred. Still others wondered why the government is spying on protesters at all.

Nathan Click, a spokesman for California Gov. Gavin Newsom, released a statement Satuday acknowledging that "the use of the RC-26 to meet the sheriff's request for aerial support to provide situational awareness for law enforcement is concerning and should not have happened."

"It was an operational decision made without the approval let alone awareness—of the governor," the statement added. "After the incident, operational policies and protocols were reaffirmed and strengthened to ensure RC-26 aircraft are not used for these incidents again."

In June, the New York Times reported that the Department of Homeland Security deployed aircraft including planes, helicopters, and unmanned aerial drones to monitor demonstrations in 15 cities across the country after Floyd's killing. They logged at least 270 hours of surveillance—far more than they had previously disclosed.

That month, the inspector general of the U.S. Air Force launched an investigation (pdf) of the Air National Guard's use of RC-26 planes to monitor recent racial justice protests. The probe concluded that since the planes could not capture "distinguishing personal features of individuals," the flights did not violate the prohibition on military surveillance of U.S. civilians.

Experts interviewed by the Times said they could think of no good reason for the El Dorado Hills mission. Dan Woodside, a recently retired Air National Guard pilot who flew RC-26Bs, called the suburb the "most monitored place in California."

"Why was that? What was the threat?" he asked. "They are absolutely covering this up."