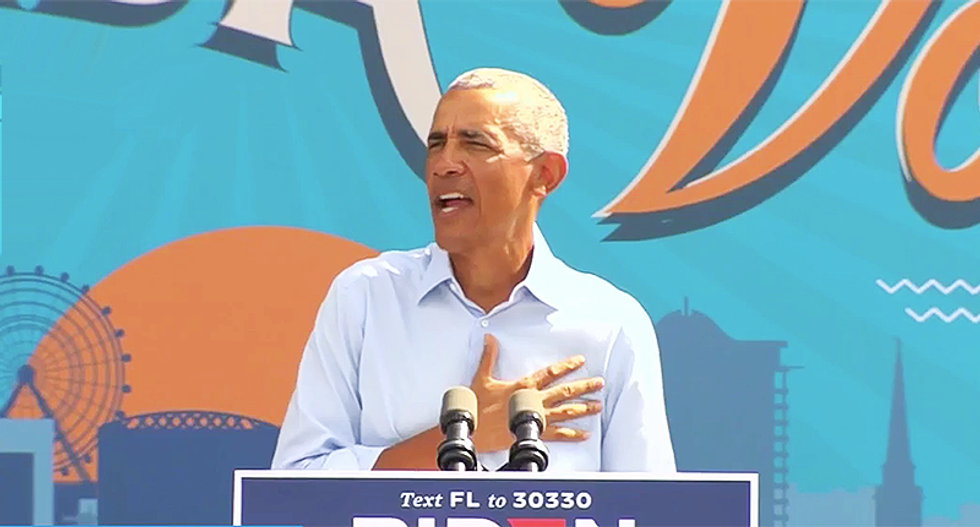 At the start of his speech, Obama noted that Trump is spending his final moments of the election complaining about the size of his crowd in 2017.

"Now, I've sat in the Oval Office with both of the men who are running for president," said Obama. "In case you couldn't tell, they're very different people. I didn't think Donald Trump would embrace my vision or policies but I did hope for the country's sake he might show some interest in taking the job seriously. but he didn't. he hasn't shown any interest in doing the work or helping anybody but himself and his friends or treating the presidency as anything more than a reality show that can give him the attention that he craves. And he does crave attention."

Obama continued: "This week, with everything that's happening, you know what he brought up? He was fussing about the crowd size at the inauguration again. Saying his was bigger. Who is thinking about that right now? Nobody except him. But the rest of us have had to live with the consequences. More than 225,000 people in this country are dead. More than 100,000 small businesses have closed. Half a million jobs are gone in Florida alone. Think about that. And what's his closing argument? That people are too focused on COVID. He said this at one of his rallies. 'COVID, COVID, COVID!' He's complaining. He's jealous of COVID's media coverage. If he had been focused on COVID from the beginning, cases wouldn't be reaching new record highs across the country this week. If we were focused on COVID now, the White House wouldn't be having its second outbreak in a month. The White House!"

He went on to say that he lived in the White House for eight years and that it's a very controlled environment where it should be easy to isolate yourself from the staff to avoid getting sick.

"Except this guy can't seem to do it," said Obama. "He's turned the White House into a hot zone. Some of the places he holds rallies have seen new spikes right after he leaves town. And over the weekend, his chief of staff said, and I'm quoting here, I'm not making this up, his chief of staff, on a news program, says, 'We're not going to control the pandemic.' He just said this. Yes, he did. And yes, we noticed you're not going to control the pandemic."

Winter is coming, Obama said, and it's clear Trump's administration is waving the white flag.

"Florida, we can't afford four more years of this," he went on. "That's why we've got to send Joe Biden to the White House. Because we cannot afford this kind of incompetence and disinterest."