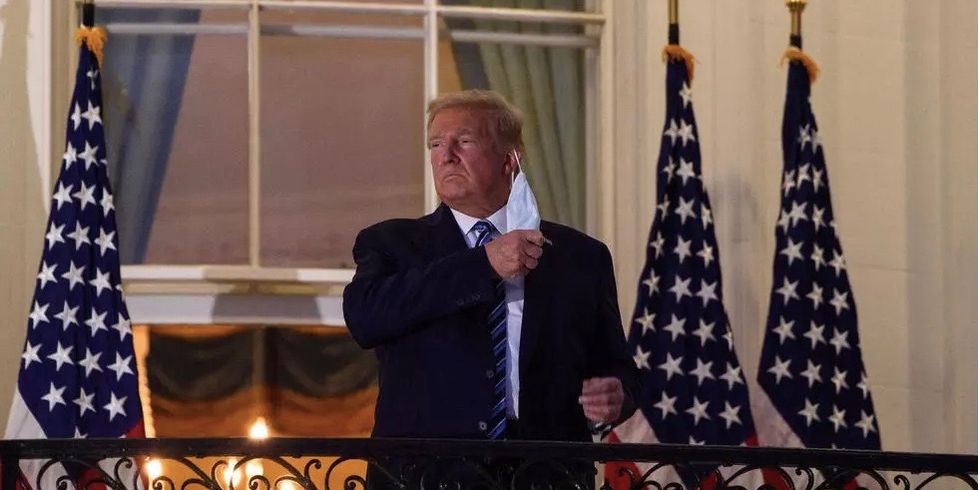 Shortly after returning to the White House, President Donald Trump lavished praise on the Covid-19 care he'd received at hospital, without acknowledging the vital role that masks and distancing play in preventing infection.

Rather than acting as a chastening experience, Trump's own bout of the coronavirus seems to have reinforced his belief that vaccines, treatments and hospital care are together the panacea that will bring an end to the pandemic.

Experts say that while all of these are crucial tools, so too are the public health measures advocated by Trump's own senior health officials, and the president missed a vital opportunity to correct course.

At the start of the crisis, when his predictions that the virus would soon disappear failed to materialize, Trump pulled out the check book -- ordering 100,000 ventilators then spending billions on vaccine research under Operation Warp Speed.

It turned out that survival rates on ventilators are in the region of 30-50 percent, and doctors use them now only as a last resort when less invasive methods of oxygenation won't work.

Vaccines, if they're safe and effective, won't be available at a mass scale before 2021, and even then scientists are trying to moderate expectations about just how good they might be, given the nature of respiratory viruses.

The minimum threshold for approval is an injection that prevents disease in half of all patients.

Among treatments that authorities are recommending, the antiviral remdesivir has shown modest results in improving recovery time, while the steroid dexamethasone reduces death rates by a third in ventilated patients.

"His whole shtick for a long time has been that this is overblown," Jeremy Konyndyk a researcher at the Center for Global Development, who oversaw the Obama administration's response to Ebola in West Africa, told AFP.

"He's not out of the woods yet, but if he survives this without any long term health impact, then that's what he will conclude based on the sample size of one, ignoring the fact that it's killed 210,000 people."

The virus continues to kill more than 700 people in America per day while more than 30,000 remain hospitalized.

For Ali Nouri, president of the Federation of American Scientists, the White House Covid-19 outbreak -- with over a dozen known infections and counting in Trump's close circle -- was evidence that the administration had relied too heavily on testing alone.

"By simply relying on these diagnostics to determine who gets to come in and out... and by not requiring other protections, like social distancing and masks, they created a false sense of comfort," he told AFP.

For months, experts have called for more rapid tests to stem the spread -- with Trump initially resisting the idea before announcing last week his administration would distribute 150 million rapid tests.

But rapid tests are less reliable than their lab-based counterparts, and neither can replace other public health measures.

Trump's macho posturing is "a really dangerous narrative to promulgate" to his followers, Gabe Kelen, a professor of emergency medicine at Johns Hopkins University told AFP.

"The best way to deal with coronavirus infection is to try not to get it all," he added.

Ultimately, it is Trump's highly selective respect for science that most angers the scientific community.

The president was administered a high dose of experimental synthetic antibodies which are seen as a promising if still unproven treatment.

"The same reasoning and processes that were used to generate those antibodies were used to produce the guidance that says that everybody should be really careful," Holden Thorp, the editor-in-chief of the Science journals told AFP.

Instead, Trump's administration has seemed to be at war with its own scientists, repeatedly watering down guidelines issued by the Centers for Disease Control and Prevention, for example.

While Trump had warm words for the doctors and nurses who treated him, his actions speak to disregard for health care workers' lives, said Kellen.

"When a large number of health care workers have died saving other people's lives who did get infected, it's beyond callous," he said.