Paris under curfew as new virus restrictions roll across Europe 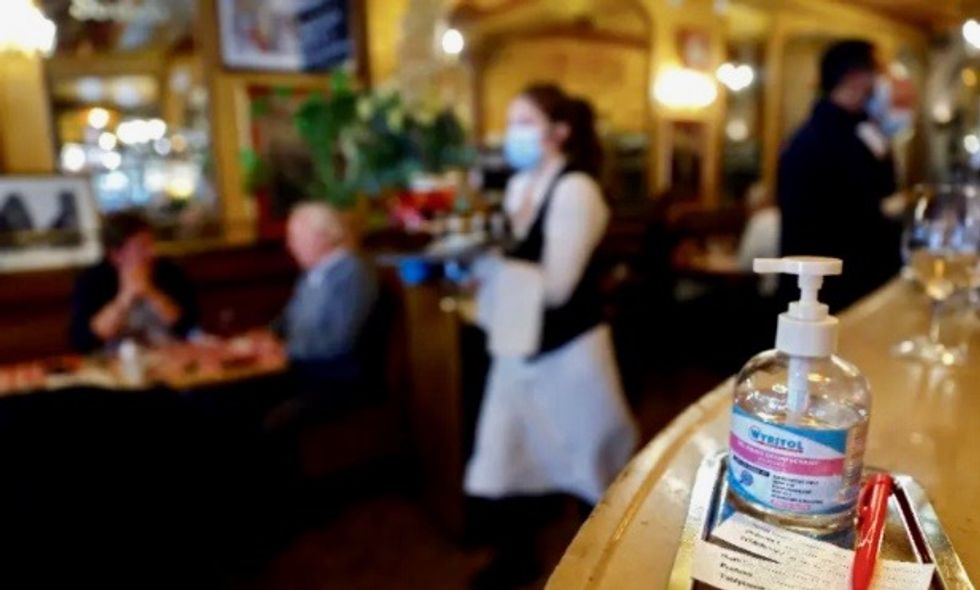 France on Wednesday became the latest European nation to toughen coronavirus controls, imposing a curfew in capital Paris and eight other cities in step with restrictions across the continent.

"We have to act. We need to put a brake on the spread of the virus," President Emmanuel Macron told public television of the 9 pm - 6 am shutdown, which will be in force for up to six weeks from Saturday.

Earlier Wednesday, France's government had said it would prolong a state of health emergency.

With over one million coronavirus deaths and nearly 40 million cases worldwide, regions like Europe that suppressed the first outbreak are again facing tough choices on how to control a new wave without economically destructive national lockdowns.

Bars and restaurants will close across Spain's northeastern Catalonia region for the next 15 days as the country tackles one of the highest rates of infection in the European Union, with nearly 900,000 cases and more than 33,000 deaths.

Measures also came into force across the Netherlands, including restrictions on alcohol sales and new mask requirements, while Northern Ireland announced a four-week closure of pubs and restaurants.

Infection rates "must be turned down now or we will be in a very difficult place very soon indeed," First Minister Arlene Foster told lawmakers in the Northern Ireland Assembly.

Johnson said a new UK-wide lockdown would be a "disaster" but refused to rule it out as the government's science advisory committee endorsed a temporary shutdown.

And in Italy, authorities recorded 7,332 new cases on Wednesday -- the highest daily count the hard-hit country has yet seen.

Rome has already imposed new, tougher rules to control the virus' resurgence, including an end to parties, amateur football matches and snacking at bars at night.

Beyond Europe, Iran on Wednesday announced new travel restrictions affecting capital Iran and four other major cities, as well as new single-day records in both Covid-19 deaths and new infections.

And neighbou\ring Iraq's death toll since the start of the pandemic passed 10,000 people.

At least 1,089,039 people worldwide have died of the coronavirus since it emerged in the Chinese city of Wuhan late in 2019, according to an AFP tally using official figures. At least 38.3 million cases have been recorded around the world.

German Chancellor Angela Merkel also wants tougher measures to fight a surge in coronavirus infections, according to a draft policy paper seen by AFP on Wednesday. Those included more masks and limiting numbers at private events.

New infections in Germany continued to rise Wednesday, pushing past 5,000 cases in 24 hours -- a level not seen since a lockdown imposed on Europe's biggest economy in the spring.

"We're in a situation where I think we can still flatten the exponential growth," Lothar Wieler, head of Germany's disease control agency said. "But for that we all need to make an effort."

New measures have evoked memories of the devastating lockdowns earlier this year that eroded economies and businesses and pushed millions of people into joblessness as sectors from the travel industry to manufacturing struggled with weeks of closure.

In online talks, G20 finance ministers and central bankers agreed to extend a moratorium on debt repayments by the world's poorest countries for a further six months and trailed still another prolongation in spring.

The virtual talks, hosted by current G20 president Saudi Arabia, came a day after the International Monetary Fund warned that global GDP would contract 4.4 percent in 2020 and the damage inflicted by the pandemic would be felt for years.

As Europe imposed new restrictions, hopes for vaccines or treatment to provide relief suffered a blow with the suspension of two clinical trials in the United States.

US pharmaceutical firm Eli Lilly said it had suspended the Phase 3 trial of its antibody treatment over an unspecified incident, the second in less than 24 hours after Johnson & Johnson ran into a similar problem with its vaccine candidate.

Despite the setbacks, which health experts say is normal as testing scales up massively in its later stages, the World Bank approved $12 billion for developing countries to finance the purchase and distribution of vaccines, tests and treatment.

In Britain, the new head of domestic security service MI5 said his agency was working to ward off foreign meddling or espionage against the country's vaccine development projects.