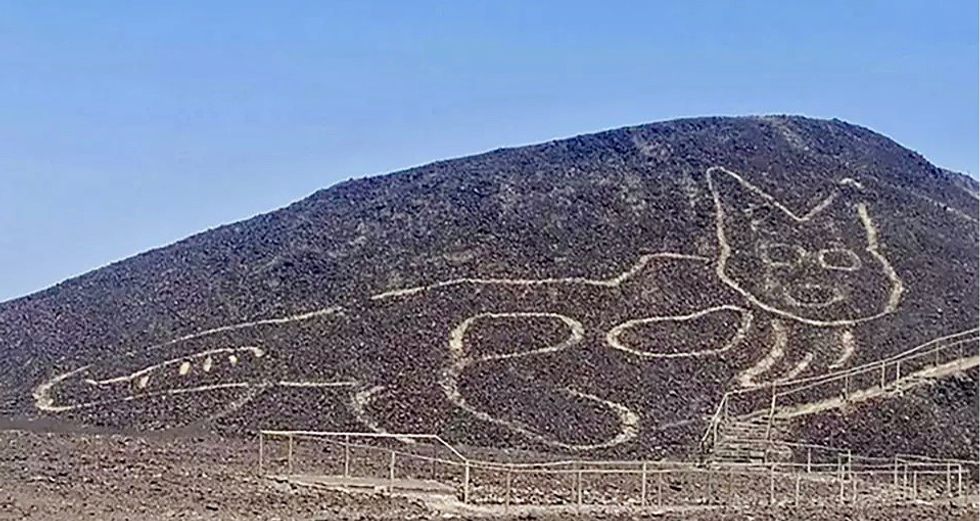 A giant 2,000-year-old figure of a feline that was on the brink of disappearing will be the new cat's meow when Peru's remarkable Nazca Lines attraction reopens to tourists in November.

The geoglyph is around 120 feet (37 meters) long and was recently discovered by a drone on a hillside, the culture ministry said.

"The figure was barely visible and was about to disappear due to the effects of natural erosion as it's on a fairly steep slope," said the ministry.

A group of archeologists took on the job of cleaning and preserving the geoglyph, which shows a cat with its body in profile but its head front on.

The lines making up its outline were mostly well defined and 12-15 inches (30-40 centimeters) wide.

Experts say its stylistic features mean it is from the late Paracas period, more than 2,000 years ago and older than the other famous Nazca figures such as the mockingbird, monkey, and spider.

The people that formed the Nazca civilization in that area of southwestern Peru lived there from 200 to 700 AD, but the cat dates from 200-100 BC.

The Paracas culture lived in the area from 800-100 BC and is believed to have been responsible for the Palpa Lines, which are similar to but less famous than the nearby Nazca ones.

The Nazca Lines, most of which are only visible from the sky, were made by people making incisions on the desert floor to leave different colored dirt exposed.

They are made up of thousands of lines including geometric patterns as well as the more famous animal figures.

The reason for their creation is unknown but soe theories include astrological and religious significance, as well as indicators of water sources.

The area, some 220 miles (350 kilometers) south of Peru's capital Lima, is a Unesco World Heritage site.