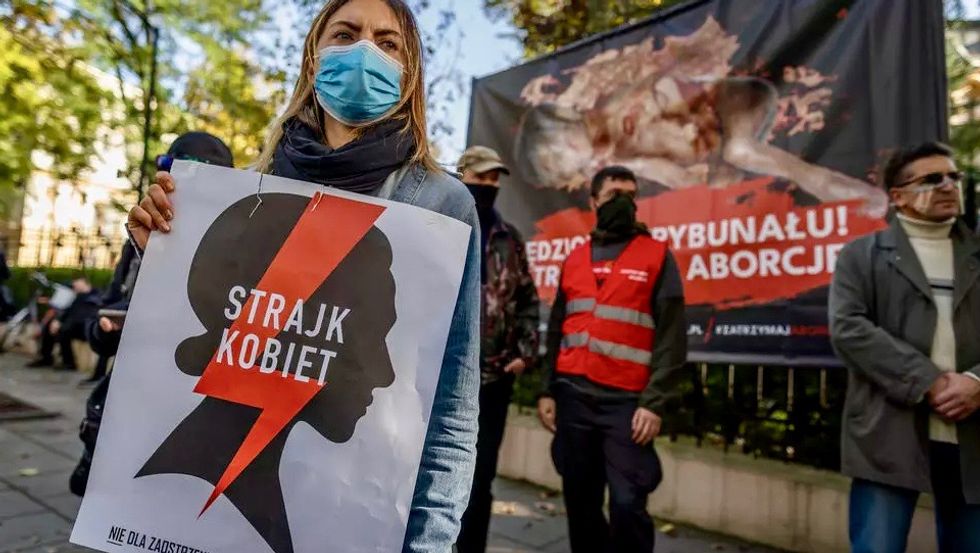 Protesters outside Poland's constitutional court on Thursday, which has opened the door for the country's abortion laws to be tightened Wojtek RADWANSKI AFP

Poland's constitutional court on Thursday struck down a provision of the Catholic country's abortion law, allowing the already strict legislation to be further tightened and drawing swift outcry from rights groups.

Chief justice Julia Przylebska said in a ruling that existing legislation -- one of Europe's most restrictive -- that allows for the abortion of malformed fetuses was "incompatible" with the constitution.

The verdict drew immediate condemnation from the Council of Europe, whose Commissioner for Human Rights Dunja Mijatovic called it "a sad day for #WomensRights."

"Removing the basis for almost all legal abortions in #Poland amounts to a ban & violates #HumanRights," Mijatovic tweeted.

"Today's ruling... means underground/abroad abortions for those who can afford & even greater ordeal for all others."

Since 1993, Poland has only allowed abortions if the pregnancy is a result of rape or incest, if it poses a threat to the mother's life or if the foetus is deformed.

Now the court ruling could pave the way for lawmakers from the governing right-wing Law and Justice (PiS) party to approve draft legislation that would ban pregnancy terminations in the case of fetuses with congenital birth defects.

Many Polish women bridled when PiS backed the bill originating as a popular petition earlier this year, prompting conservative lawmakers to refer the matter to the constitutional court.

The tribunal, whose main role is to ensure that any law complies with the constitution, underwent government reforms in 2016 that led critics to contend it is stacked with PiS allies.

"Throwing the topic of abortion and a ruling by a pseudo-court into the middle of a raging pandemic is more than cynical," the head of the European People's Party tweeted.

PiS-allied President Andrzej Duda has said that if approved by the parliament, he would sign the draft legislation into law.

The country of 38 million people sees fewer than 2,000 legal abortions a year, but women's groups estimate that up to 200,000 procedures are performed illegally or abroad.

An attempt by the PiS government to tighten the abortion law in 2016 was scrapped following nationwide protests by tens of thousands of women dressed in black.