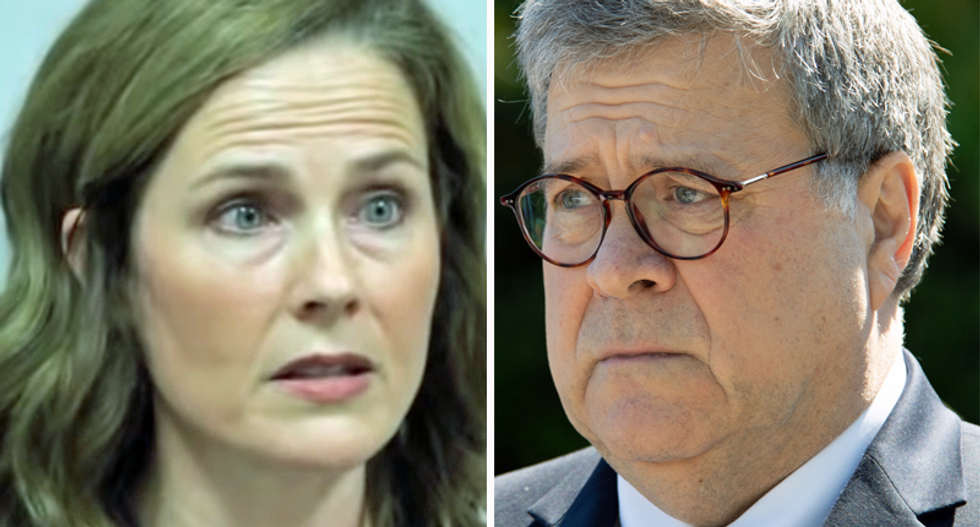 "Attorney General Barr has acted to subvert the laws that he, as our nation's chief federal law enforcement official, is duty-bound to uphold," more than 20 progressive groups signed in a joint letter.

"Attorney General Barr has made a career out of undermining our democracy and it is pellucidly clear that he has been ramping up efforts to undermine the upcoming elections and invalidate the votes of millions of Americans," the groups wrote.

The groups explained that the Democrats in the House of Representatives have power that Senate Democrats lack -- they can delay the confirmation of Judge Barrett's nomination to the Supreme Court by impeaching Barr, as it would force action by the Senate and scuttle the current calendar being pushed by Senate Majority Leader Mitch McConnell (R-KY) according to Senate rules.

"Should you impeach Attorney General Barr prior to October 23rd, the Senate would be required to take one of two actions. On one hand, the Senate would be obligated to hold a trial, which would occupy a day or more of floor time and delay the hasty and irregular consideration of Amy Coney Barrett as a Supreme Court associate justice," the groups explained. "In the alternative, Senate Republican leadership would be forced to go 'nuclear' by changing the rules that govern how that chamber responds to receiving articles of impeachment from the House of Representatives."

"Either outcome is desirable," the groups concluded.

Demand Progress, Our Revolution and the Sunrise Movement were among the progressives organizations that signed on to the strategy.