Republican women are more likely to believe conspiracy theories and not accept a Trump loss: report

A Bulwark report detailed the shocking data that Republican women are more likely to believe conspiracy theories and refuse to accept a defeat of President Donald Trump.

A collection of data is showing that Republican women are more susceptible to radicalization, Trumpism, and flocking to what they're calling it the "pastel QAnon."

An early October Washington Post/ABC News poll asked Republican women about their feelings around Trump and the election and found that they were more supportive of Trump and his positions than the nation as a whole, by a margin of 2:1.

"In a partisan, highly polarized age, that isn’t surprising. What is surprising is that these women are more supportive of Trump than the Republican men who were seen to have powered his victory in 2016," the report revealed. 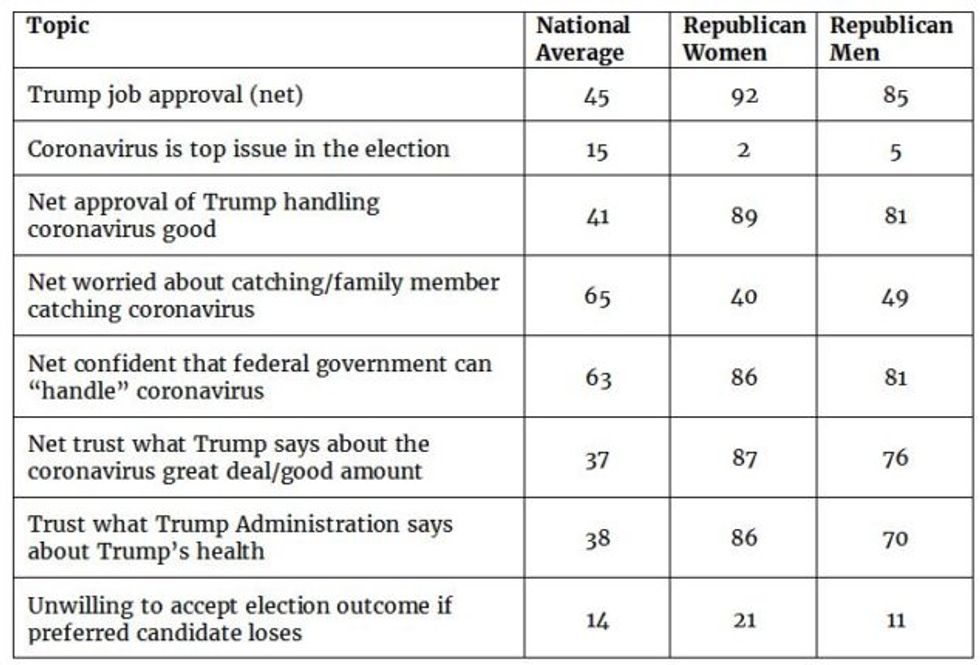 A September report from the American Enterprise Institute drilled down on the GOP women to get more information about their attitudes about the QAnon conspiracy theories. It revealed that GOP women were far more open to popular conspiracy theories than the general public. It was captured last week in an MSNBC interview with a woman who was nearly in tears over the conspiracy theory that children were being trafficked by something affiliated with Democrats. Their emotion is real and they believe what they're reading on Facebook. Oddly, when it comes to real stories about immigrant children in cages being raped and forced to drink out of toilets, they haven't raised alarm.

If Vice President Joe Biden wins the election next week, QAnon won't stop pushing its theories just as Alex Jones did before them and PizzaGate before that.

Across the U.S.  there are almost thirty congressional candidates on the ballot that either endorsed QAnon conspiracies or promoted it. More than half of them are women.

"It is easy to discount QAnon—but the reality is it is quickly emerging from the shadows into a full-blown political movement that periodically receives the passive, and at times, active support of the president of the United States," the report closed. "While YouTube, Facebook, Reddit, and Twitter have all imposed restrictions on QAnon content, it remains to be seen whether those controls will help stem the tide of misinformation, conspiracy-mongering, and the social and political distortions that accompany them."

Read the full story at The Bulwark.