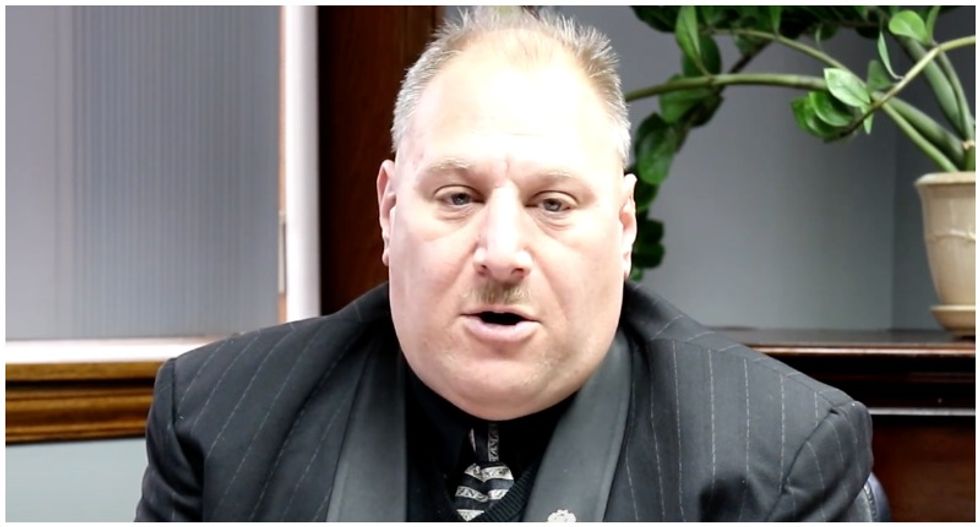 A city councilman in Michigan known for taking an antagonistic stance against anti-racist activists is being accused of chasing down and handcuffing a woman who put Black Lives Matter stickers on Trump campaign signs, the Detroit Free Press reports.

Warren city councilman Eddie Kabacinski is being investigated for his actions that took place during an October 14 Trump rally in Eastpointe. According to St. Clair Shores Police, officers were sent to the rally to deal with a report of a man who handcuffed a woman. After removing the woman from the handcuffs, police determined the woman stuck three Black Lives Matter stickers on Trump signs that were placed along the street where she was walking.

That's when Kabacinski chased her down and grabbed her, prompting her to retaliate by spraying him with silly string. He then slapped the handcuffs on her.

According to Kabacinski, he detained the woman because she tried to "breach the peace" by placing the stickers on the Trump signs, claiming he is a former military police officer and federal law allows him to detain those who breach the peace or break the law.

“Putting a decal sticker over a Trump sign, and it says Black Lives Matter, you are promoting a domestic terrorist organization on a Trump sign and that’s not good,” Kabacinski told a local newspaper. “That’s not the image that the Trump campaign or the Republican Party is trying to convey. We are trying to get back to law and order in this country.”

He said the placement of the sticker “was antagonistic and it was to elicit a response.”

“This situation should not have taken place, but a lot of things take place with this city council that are highly unusual,” Warren Mayor Jim Fouts said, according to local news outlet WXYZ.

“We are here to serve and protect our citizens,” Fouts said. “I’m not quite sure handcuffing a citizen is serving and protecting the citizens.”