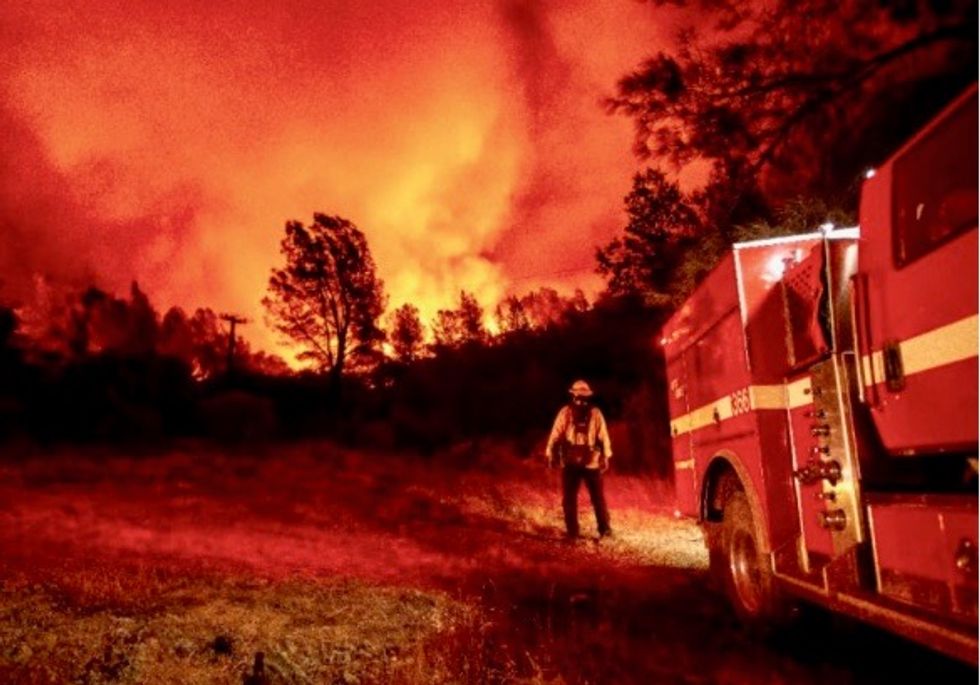 After repeatedly downplaying the catastrophic wildfires that have ravaged California in recent months and falsely attributing the blazes to poor "forest management," the Trump administration this week denied Gov. Gavin Newsom's request for federal disaster assistance needed to recover from the destruction the fires inflicted across the state.

The Los Angeles Times reported late Thursday that the Trump White House "rejected California's request for disaster relief funds aimed at cleaning up the damage from six recent fires... including Los Angeles County's Bobcat fire, San Bernardino County's El Dorado fire, and the Creek fire, one of the largest that continues to burn in Fresno and Madera counties."

Newsom, a Democrat, officially requested the federal relief in a September 28 letter warning that "the longer it takes for California and its communities to recover, the more severe, devastating, and irreversible the economic impacts will be." According to the governor's office, nearly 1,000 California homes were destroyed by the unprecedented fires, which scientists said were fueled by the human-caused climate crisis.

"Federal assistance is critical to support physical and economic recovery of California and its communities," Newsom wrote.

The White House's decision to reject California's request was met with outrage by environmentalists and lawmakers who represent the state.

"On August 21, I led a 26-member letter asking [the inspector general of the U.S. Department of Homeland Security] to investigate whether Donald Trump previously ordered FEMA to cut off wildfire aid to CA because 'politically it wasn't a base for him,'" said Rep. Ted Lieu (D-Calif.). "Now POTUS is in fact rejecting aid to CA this year. Despicable."

Meteorologist Eric Holthaus tweeted that he "actually can't believe this, and there's been a lot happening lately. Trump must go."

"That a sitting president—of any party—would deny their own citizens help during their time of greatest need, amid literal hellfire raining down on American cities, is beyond shameful," Holthaus wrote.

As the Times reported, "A major disaster declaration allows for cost-sharing for damage, cleanup and rebuilding between the state and federal government. It also activates federal programs led by the Federal Emergency Management Agency. California did not ask for a specific dollar amount because damage estimates are not complete."

California is expected to appeal the Trump administration's denial of federal aid, which comes a month after the president told state officials that "it'll start getting cooler, you just watch," as they pressed him to acknowledge and act on the connection between climate change and the destructive fires.

Brian Ferguson, deputy director of crisis communication and media relations for the California governor's Office of Emergency Services, told the Times Thursday that the "true cost" of the damage caused by the historic fires "won't be known for months or years afterward."

"What the state is looking for is the highest level of federal support, which requires the highest bars be cleared," said Ferguson. "But we feel our case for those requirements has been met."