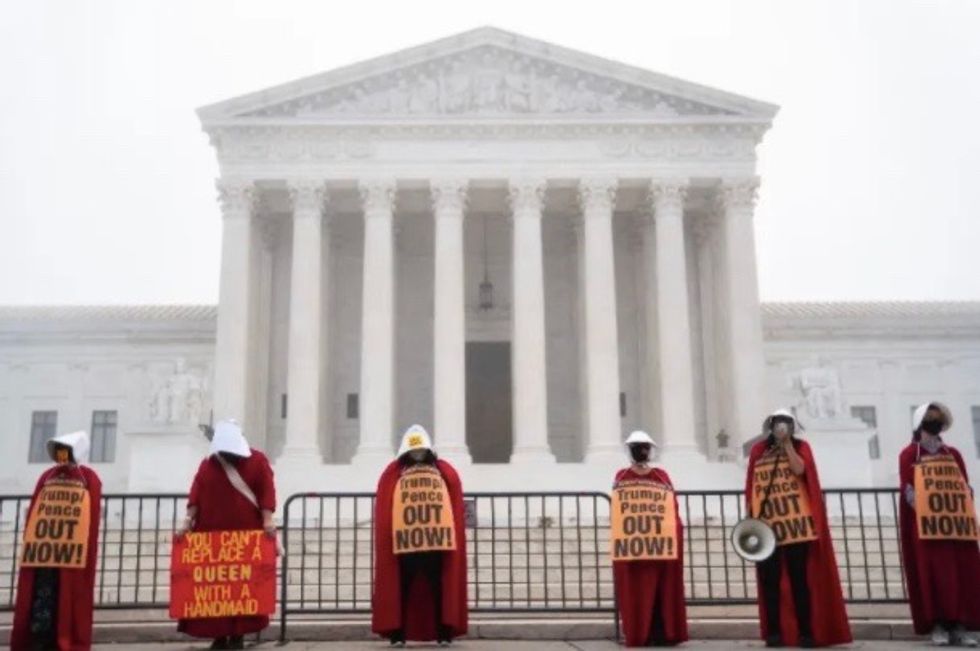 Despite lacking the quorum required to conduct business after Senate Democrats boycotted the hearing—filling their vacant spots with portraits of Americans who would lose crucial protections if the Affordable Care Act is overturned by the high court—Republicans on the Judiciary Committee once again disregarded the rules and voted unanimously to recommend that the full Senate approve Barrett, paving the way for a final confirmation vote as early as Monday.

"This sham process has been an affront to the voters, who deserve a voice when it comes to the future of the Supreme Court and climate action."

"A vast majority of Americans have made it clear that the Senate should focus on providing relief to the millions of people reeling from the flailing economy, not filling a Supreme Court seat," Ana Maria Archila, co-executive director of the Center for Popular Democracy Action, said in a statement. "Yet Republicans refuse to listen or care, putting their insatiable quest for power ahead of the people they vowed to serve and the Constitution they swore to uphold."

Applauding Judiciary Committee Democrats for boycotting Thursday's hearing, Archila said that "we need others to follow suit to stand against this shameful power grab meant to circumvent and silence the voice of the people."

After voting to officially clear the way for Barrett's final confirmation vote, Senate Republicans also advanced the nominations of five other right-wing judges, including one who was rated "not qualified" by the American Bar Association.

"An incredibly dark moment for the committee," tweeted Vanita Gupta, president and CEO of the Leadership Conference on Civil and Human Rights.

During a press conference at the U.S. Capitol Building with Democratic members of the Judiciary Committee, Senate Minority Leader Chuck Schumer (D-N.Y.) denounced the rapidly advancing Barrett nomination as a "naked power grab" by the Republican Party and "the culmination of a decades-long effort to skew the court to the far-right."

"This isn't a difference of opinion—this is an illegitimate power grab," Sen. Elizabeth Warren (D-Mass.) tweeted Thursday. "Senate Republicans know this process is a sham, and they're ramming their nominee through anyway in a desperate attempt to cling to power and impose their extremist agenda on the entire country."

The Senate Judiciary Committee's approval of Barrett came after several days of hearings in which the right-wing judge repeatedly refused to state her position on a number of key issues—including the climate crisis, which she described as "controversial"—and did nothing to assuage fears that, if confirmed to the high court, she will pose a threat to the environment, immigrants, labor rights, and reproductive rights.

"We knew before the hearing that Barrett holds extreme views on reproductive rights and freedom—and her hearing made that even clearer," Fatima Goss Graves, president and CEO of the National Women's Law Center, said in a statement Wednesday. "She dismissed countless questions by saying that her personal views are separate from her legal views. But we take cold comfort in that since her legal rulings line up exactly with her personal views."

With so much hanging in the balance, Democrats on the Judiciary Committee—particularly Sen. Dianne Feinstein (D-Calif.), the committee's ranking member—came under fire for failing to do everything in their power to delay a confirmation process that they themselves decried as illegitimate and a "sham."

"If Senate Democrats are going to get their act together on the courts going forward, they cannot be led by someone who treats Sunrise activists with contempt and the Republican theft of a Supreme Court seat with kid gloves," said Brian Fallon of advocacy group Demand Justice, part of a chorus of progressive organizations calling on Feinstein to step aside as the top Judiciary Committee Democrat.

The people are here and making our voices heard. NO CONFIRMATION BEFORE INAUGURATION. If you’re in DC we are co-h… https://t.co/ADLC4wXUvD
— Presente.Org (@Presente.Org) 1603378429.0

Lori Lodes, executive director of Climate Power 2020, said in a statement following the Judiciary Committee hearing Thursday that "the Republican senators who voted to move Barrett forward today are about to find out that voters will hold them accountable for rushing a climate denier onto the Supreme Court."

"This sham process has been an affront to the voters, who deserve a voice when it comes to the future of the Supreme Court and climate action," Lodes added. "The last thing our country can afford is a climate denier who will use her lifetime seat on the Supreme Court to block climate action and roll back our environmental laws for decades to come."