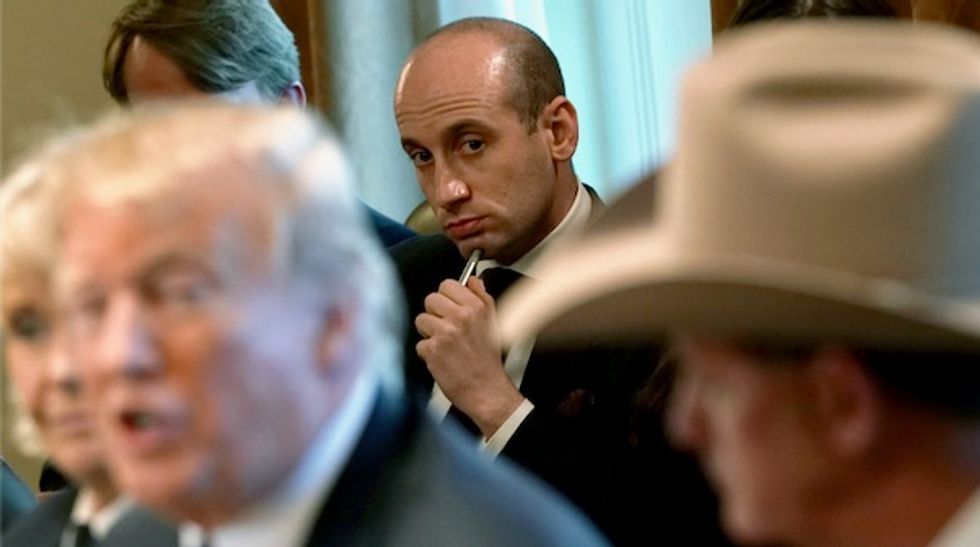 President Donald Trump speaks as Senior Advisor to the President Stephen Miller (C) listens during a round-table discussion on border security and safe communities with State, local, and community leaders in the Cabinet Room of the White House on January 11, 2019 in Washington, D.C. (Photo: Alex Wong/Getty Images)

Immigrant rights advocates along with Democratic presidential nominee Joe Biden and his supporters responded with alarm to reporting this week that Stephen Miller, a senior adviser to President Donald Trump, is plotting how to "rev up Trump's restrictive immigration agenda" and is ready to "unleash executive orders deemed too extreme for a president seeking reelection" in the event of a Biden loss next week.

NBC News reported Friday that Miller, speaking as an adviser to the president's campaign, laid out four top priorities in a 30-minute call Thursday: "limiting asylum grants, punishing and outlawing 'sanctuary cities,' expanding the so-called travel ban with tougher screening for visa applicants, and slapping new limits on work visas." Implementing these policies would require a mix of legislation and executive action.

Biden's director of Latino media Jennifer Molina responded by declaring, "We are going to win this election so that people like Stephen Miller don't get the chance to write more xenophobic policies that dishonor our American values."

The former vice president, for his part, said in a statement Friday that the agenda outlined by Miller represents "four more years of hateful rhetoric and division" and policies that demonstrate "cruelty and exclusion" rather than hope.

"This agenda is designed to do one thing only: divide our communities with cheap, xenophobic rhetoric, and demonize those seeking to make legitimate asylum claims in the United States to find a life of safety for themselves and their children," Biden said.

A portion of this immigration agenda that struck me: The U.S. already screens visa applicants for ties to extremist… https://t.co/QI1zC1rB5I
— Sahil Kapur (@Sahil Kapur)1604066325.0

His initial phone call with Miller—in which the Trump adviser said a broad goal of the administration is "raising and enhancing the standard for entry" to the United States—elicited concern from far more than just the Biden campaign, which has been challenged to reckon with the Obama administration's track record on immigration policy, particularly deportations.

As of Saturday afternoon, an estimated 90 million Americans, including more than nine million voters in the key battleground and border state of Texas, had already cast ballots in the November 3 election.

Kapur's interview with Miller was among multiple recent reports in the lead-up to Election Day that have reflected on Trump's immigration policies and detailed what could come if he wins another term.

From the Muslim ban to the family separations at the U.S.-Mexico border, President Donald Trump’s harsh immigration… https://t.co/j7BYZajNAn
— HuffPost (@HuffPost)1604004060.0

Before outing himself on Wednesday as the author of an anonymous 2018 New York Times editorial claiming that "many of the senior officials" within the Trump administration formed a "resistance," former Homeland Security Department Chief of Staff Miles Taylor had mentioned the planned executive action on immigration during a September interview with the Lincoln Project.

Taylor's revelation about the editorial drew fresh attention to his remarks last month that an adviser, widely presumed to be Miller, had told him that "the second term would be shock and awe ... and he had a list of executive orders in his drawer."

"He had a locked drawer that had executive orders that he'd worked on with the White House Counsel's office and a very small group of people," Taylor said, "and they were things that were unacceptable to issue at a first presidential term because they knew they would lose voters because they would be so extreme."

Tying Taylor's warning to Miller, the Guardian noted Wednesday that "the 35-year-old has managed to keep his position as a senior adviser to the president after being exposed for having an affinity for white nationalism and becoming synonymous with unpopular Trump administration policies such as family separation."

Although the president was ultimately pressured to formally end the family separation policy, which critics including Physicians for Human Rights condemned as "torture" and "state-sanctioned child abuse," the U.S. government is still unable to find the parents of 545 migrant children. Biden said Thursday that if he is elected, he will form a task force to reunite those families.

Jean Guerrero, the author of the Miller biography Hatemonger, told the Guardian that "there's a number of things they have been cautious about because of the legal and political risks in the first term and I think that in a second term you would see Stephen Miller get much freer rein when it comes to his wishlist of items."

During Trump's first term, "Miller wanted the leadership to constantly have immigration and border issues as their top priority, and he ensured that happened by manipulating the bureaucracy, by constantly invoking Trump's demands, Trump's desires," Guerrero said. "The cabinet secretaries are aware of Stephen Miller's relationship with the president."

The Guardian's report generated concern among immigrant rights organizations and advocates, with the Texas-based group RAICES tweeting: "We beg you, #DontLookAway."

As Common Dreams reported Thursday, less than a week before Election Day, a U.S. House committee released a scathing report which said that "the Trump administration's family separation policy lasted far longer than is commonly known and was marked by reckless incompetence and intentional cruelty."

The report, said Amnesty International refugee and migrant rights researcher Denise Bell, "only confirms what this administration's immigration policies have shown: cruelty was always the point."

Hundreds of mourners, including relatives of George Floyd and top Minnesota politicians, attended the funeral on Thursday of Daunte Wright, a young Black man killed by a police officer in Minneapolis.

"The time has come for police to understand they're not above the law," veteran civil rights leader Al Sharpton said in his eulogy.

French astronaut Thomas Pesquet is due to lift off Friday for his second stay aboard the International Space Station. This time around he is taking four "blobs" with him, strange single-celled organisms that are neither plants nor animals nor funghi. The aim is to study how their behaviour in space is affected by microgravity.

During the Alpha mission, which is scheduled to last six months, Pesquet will carry out numerous scientific experiments aboard the International Space Station (ISS). The programme includes observing how astronauts sleep in space, growing a plant, moving an object with an "acoustic clamp" and also taking care of four blobs, the unicellular organisms that have long fascinated the scientific community.

One industry that has struggled as a result of the COVID-19 pandemic is rental car companies. And according to Hawaii News Now, the struggles have gotten so bad that many tourists in Hawaii have to turn to U-Haul instead of the traditional rental firms.

The reason? They got rid of too many cars and don't have an easy way of buying a new fleet.