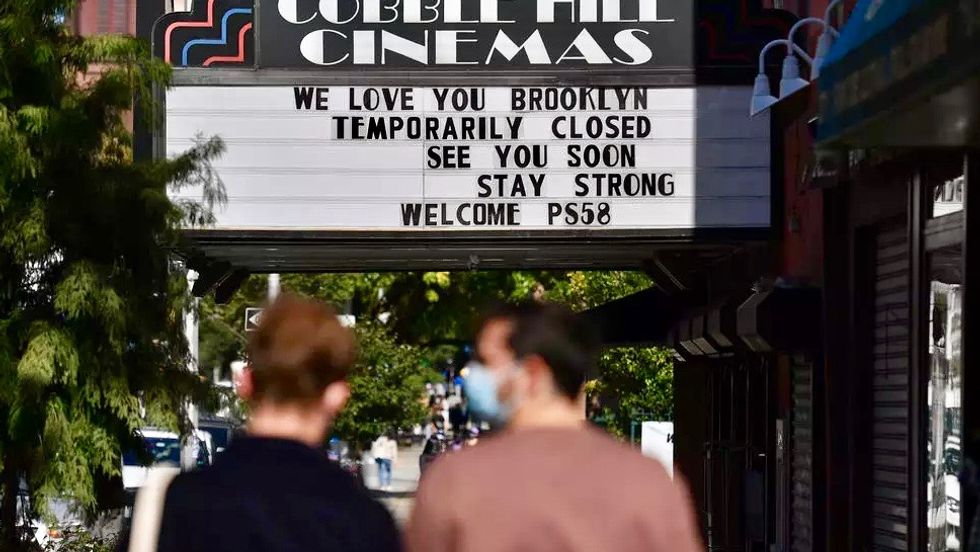 People walk past Cobble Hill Cinemas, which has taken on a new life as an annex for a neighborhood elementary school during the pandemic Angela Weiss AFP

With theaters closed in New York and Los Angeles and would-be movie goers across the country choosing to stay in, US cinemas are sending out a desperate SOS -- so far unanswered by Congress, local officials and studios.

Regal Cinemas, the second largest chain in America, officially shut its doors on Thursday for lack of profitability, following an August reopening.

It mentioned closures in New York as a major factor in its decision.

"The studios really need New York City in order to get decent growth out of a movie. And without New York they can't do that," said Joseph Masher, chief operating officer of Bow Tie Cinemas, a medium-sized chain.

Governor Andrew Cuomo will not budge on the matter, even though he has allowed partial indoor restaurant dining. He said in mid-September that the state was "not yet at a point where we can get back to normal life."

"I honestly think that people sitting in a movie theater for two hours with a mask on is safer than sitting in a restaurant for an hour with no mask," he said.

Across the country nearly 400 exhibitors, which account for more than 33,000 out of 40,000 overall screens, have adopted a strict health protocol called CinemaSafe, wich includes rules on distancing, ventilation and masks. But Cuomo hasn't budged.

To date, no transmission has been linked to a movie theater in the United States or elsewhere.

"Right now the infection rates are rising so the idea of opening up now with so many questions up in the air to me feels irresponsible," said Christian Grass, CEO of Metrograph, an independent movie theater in Manhattan.

Julia, a 23-year-old who lives in New York, says she'll hold out for a vaccine: "There's so many things to watch streaming that I'd be able to wait," she said.

For Michelle, a 42-year-old mother from Brooklyn, waiting was not on the agenda.

She traveled with her son to the state of New Jersey, where cinemas are allowed open, to see the delayed summer blockbuster "Tenet."

"It looks very clean and it seems that they're taking all the precautious," she said following the showing, which was attended by just a few people.

In Los Angeles, the largest US market, theaters are also still closed but unlike New York, authorities tied their reopening to certain indicators being met.

The film industry had a blockbuster line-up of movies ready to roll out in November and December but has pushed their release to 2021, including "Black Widow," the 007 film "No Time to Die," "West Side Story" and "Top Gun: Maverick."

"Studios must be willing to take a hit to feed the industry and keep the exhibitor group from completely falling apart," said B. Riley Financial analyst Eric Wold.

Theater operators have also turned to Congress asking for support as part of a US stimulus bill that may not even be approved in 2020.

Without political support and barring the release of any studio blockbusters "we're going to see theaters just go out of business permanently," said Masher.

He said he's counted at least a dozen theaters that have already thrown in the towel across New York state.

AMC, the largest US theater chain, should be able to hold out until at least mid-2021, Wold estimates. The third largest, Cinemark, should make it to the end of 2021 under current conditions, he added.

But it's the smaller players that worry him.

Bow Tie Cinemas has so far furloughed about 900 of its 950 employees.

"We're doing our best to keep afloat and watching our expenses and hopefully we'll be fine," Masher said.

Elgart, who owns several theaters, said he "can't pay anybody because I don't have any money to pay people" before adding defiantly that, nevertheless, "we're not closing."

While waiting for an eventual green light, some theaters are transitioning towards other ways to make money.

Cobble Hill Cinemas, owned by Elgart, has become something of an annex for the neighborhood elementary school

And the Metrograph has staged online screenings, allowing it to triple its number of subscribers.

"We are adapting to a new market," said Grass. "We're looking for new ways to distinguish ourselves in this new marketplace."

That said, theaters and viewers are on the same page about one matter: cinema will not die.

"People want to see movies on the big screen," said Grass. "It's a shared experience. I have no doubt that it will bounce back fully."