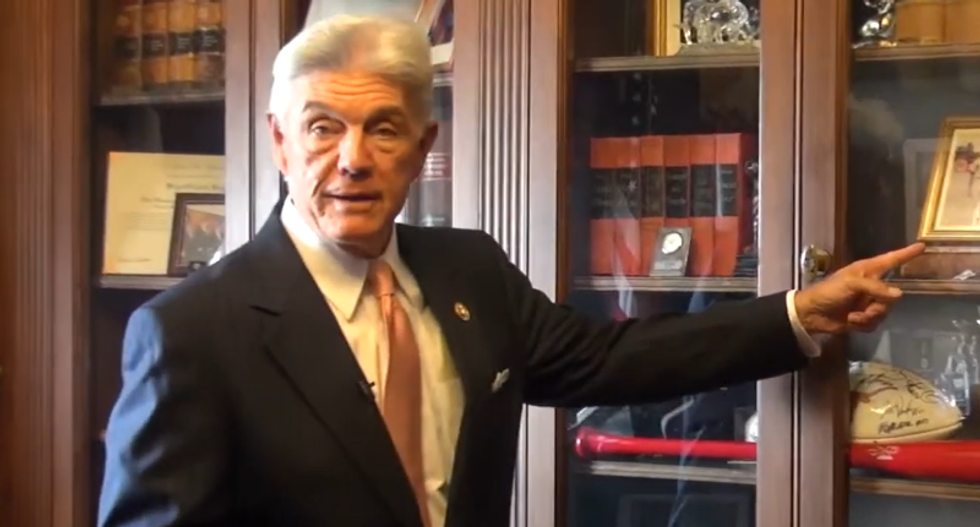 On Thursday, the Houston Chronicle reported that a Texas GOP congressman may have tried to improperly influence a bank to assist one of his campaign donors.

"U.S. Rep. Roger Williams, a Central Texas Republican and member of the House Financial Services Committee, used his powerful post in Congress to try to help a top donor in his dealings with a publicly traded bank, court records show," reported Jay Root. "The controversy spilled out into a Texas bankruptcy case after Williams tried to broker a meeting between the wealthy donor — oil field investor Gary Martin of Marble Falls — and the CEO of UMB Financial Corp., which owns UMB Bank. The bank’s lawyer voiced objections to the 'pressure' tactic and UMB ultimately declined to set up a meeting."

"The congressman said in a deposition taken July 25 that he saw nothing wrong with the attempted assist, but one of UMB’s lawyers saw it differently: Attorney Kyle Hirsch testified under oath that Williams’ intervention exerted inappropriate pressure on UMB and that unless the CEO agreed to meet with his donor there could be problems for the bank in Congress," continued the report. "Martin said he wanted Williams to help him get a meeting with UMB Financial’s CEO, Mariner Kemper, to discuss a multi-million dollar loan package he said the bank was prepared to provide to Diamondback, the company Repeat Precision has been battling in the court system. The bank declined comment, citing the pending litigation."

Williams, a North Texas car dealership owner who represents a sprawling district from Austin to Fort Worth, has previously faced criticism for taking loans from the Paycheck Protection Program (PPP) — the COVID-19 small-business relief program he helped create.