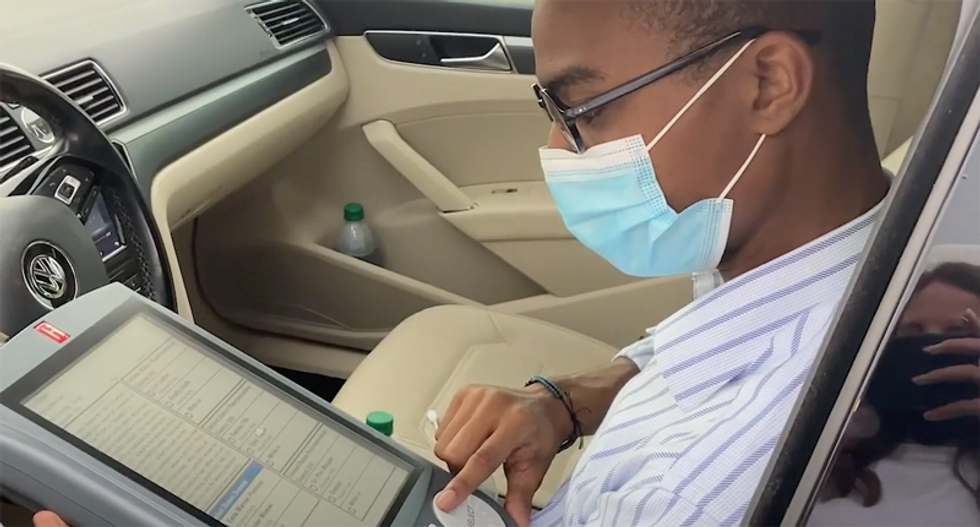 For 18 days of early voting, Harris County residents waited in line, had their identities verified by poll workers, and cast their votes in a presidential election that has seen record-breaking early turnout.

But for the nearly 127,000 people who did so at drive-thru polling places instead of in traditional indoor sites, many are now watching with fear as a wealthy conservative activist, a Republican state representative and two GOP candidates aim to throw out their ballots at the last minute. In the state’s most populous — and largely Democratic — county, drive-thru voters are left anxiously awaiting court decisions before Election Day on Tuesday that could force them to go back to the polls. Likely many more are unaware of their votes' potential demise.

The Republican legal effort could jeopardize 10% of the in-person early votes that were cast at 10 drive-thru polling places throughout the county — a vote count higher than the entire early vote total in Nueces County, home of Corpus Christi and the state's 16th most populous county.

Two lawsuits by the group of plaintiffs have been filed in recent days after a similar challenge was already rejected by the all-Republican Texas Supreme Court.

“I’m just crossing my fingers and hoping for the best, but I think this is ridiculous,” Christine Charles told The Texas Tribune Saturday. “They could have done this two weeks ago, and we could have voted [inside] in person.”

Charles, 32, works at a medical center in Houston with her friend, so they opted to stay in her car to vote when they arrived at NRG Park. They didn’t want to potentially expose other people to the coronavirus in a voting line, she said. She was “jazzed” about the process, which includes the same safeguards as voting indoors.

“We thought it was fine, and then I see these stories,” she said, referring to the lawsuits seeking to toss the votes. “We can both still go on Tuesday and vote if we have to, but I want to know. If my vote’s going to be thrown out, when are we going to know that’s the case?”

The state’s Republican leadership, meanwhile, has stayed silent on the issue.

Harris County first tested drive-thru voting in the July primary runoffs with little controversy, and the county’s 10 drive-thru centers were established for the fall election to make early voting easier for people concerned about entering polling places during the pandemic. Voters pull up in their cars, and after their registrations and identifications have been confirmed by poll workers, are handed an electronic tablet through their car windows to cast ballots.

The plaintiffs, all Republicans, are conservative activist Steven Hotze, state Rep. Steve Toth of The Woodlands, congressional candidate Wendell Champion and judicial candidate Sharon Hemphill. They argue that the county’s new drive-thru voting sites are an illegal expansion of curbside voting and violate Texas election law and the U.S. Constitution. Curbside voting, a separate option long available under Texas election law, requires workers at every polling place to deliver onsite curbside ballots to voters who are “physically unable to enter the polling place without personal assistance or likelihood of injuring the voter's health.”

Hotze is an active GOP donor and is one of the most prolific culture warriors on the right. He's a fierce opponent of same-sex marriage and was a key figure in the unsuccessful push for the 2017 "bathroom bill" in the Texas Legislature. This year, he has filed numerous lawsuits seeking to overturn Gov. Greg Abbott’s coronavirus restrictions and block Harris County’s efforts to make it easier for people to vote. And he left a voicemail for Abbott’s chief of staff this summer telling him to shoot and kill people protesting the in-custody death of George Floyd.

Teeing up a massive potential disenfranchisement of Harris County voters, the Republicans are asking the courts to not only declare drive-thru voting illegal in Texas, but to throw out the votes cast at such polling locations. An earlier legal challenge against drive-thru voting brought by Hotze, Hemphill and the Harris County Republican Party was rejected by the Texas Supreme Court last week.

“Unless stopped, illegal votes will be cast and counted in direct violation of the Texas Election Code and the United States Constitution and result in the integrity of elections in Harris County being compromised,” the petition to the court said.

(Voters who used the drive-thru option are subjected to the same verification requirements as those who vote in traditional polling places.)

Harris County officials have continued to defend the legality of the program, and noted that the Texas secretary of state’s office had approved of drive-thru voting. Keith Ingram, the state’s director of elections, said in a court hearing last month in another lawsuit that drive-thru voting is “a creative approach that is probably okay legally,” according to court transcripts.

Plus, the county argued in a Friday filing that Texas's election code, along with court rulings, have determined that even if the drive-thru locations are deemed violations, votes cast there are still valid.

"More than a century of Texas case law requires that votes be counted even if election official[s] violate directory election laws," the county’s filing said.

Still, the challenges have arrived in front of conservative judges in part of what the county’s attorney in the state lawsuit said is part of a national Republican strategy in the courts for what’s expected to be a close presidential race. The lawsuits were filed as a record number of voters turned out in Texas and polls showed a narrowing presidential race in the state. There was no lawsuit or public expression of concern when the county first tried this method in the July runoffs.

Susan Hays, attorney for the Harris County Clerk’s Office, said Saturday that if a court moved to invalidate the votes before Tuesday, voters could cast on Election Day a provisional ballot. Provisional ballots are reviewed after Election Day and counted once election workers determine they qualify. The clerk’s office is confident the county’s about 800 polling locations could handle the 127,000 people whose votes are at risk, she said, but that depends on the voter being aware of the fate of their first vote and able to make a second trip to the polls.

The challenges join a flurry of other lawsuits on Texas voting procedures filed in recent months, with Democrats and voting rights groups pushing for expanded voting access in the pandemic and Republicans seeking to limit voting options. The courts have recently ruled against other last-minute challenges on voting access by noting that cases were filed too late, and that changes to voting procedure during an election would sow voter confusion.

In the pending cases on drive-thru voting, the state’s highest civil court could rule on the pending case at any time, and U.S. District Judge Andrew Hanen has scheduled a hearing for Monday morning.

Since the first Republican challenge to drive-thru voting was filed on Oct. 12, the Texas secretary of state and Abbott have both ignored requests from reporters and Harris County officials to clarify their positions on whether the process was legal.

In the meantime, voters feel held in limbo.

Clifton House’s 77-year-old mother-in-law, Annbell, voted at the Houston Community College - West Loop drive-thru center on Oct. 16 at his and his wife’s insistence, House said. His mother-in-law had just been discharged from the hospital the day before, and they didn’t want her standing in lines to potentially be exposed to the coronavirus. In hindsight, he said, it may have been bad advice.

“She specifically did not want to vote by mail to ensure her vote got counted,” he said. “Because of the [U.S.] Post Office stuff, and the signature matches and all the things they can do where you don’t have any chance to defend yourself.”

Shelby Strudler, 44, took the opportunity to vote in her car because a herniated disc and pinched nerve in her back makes standing for long periods of time painful. She called the lawsuits “wholly un-American.” She also voted at the West Loop HCC location.

“It just causes a lot of chaos and confusion,” she told the Tribune. “If this particular judge does nullify these votes, will I be allowed to vote on Tuesday? Am I not allowed to vote at all now? Does my vote not count at all?”

Strudler, who keeps up to date with news online, said even if there is another opportunity to vote, many of the other nearly 127,000 people won’t know that or be able to again cast a ballot on Election Day.

“The GOP is doing everything possible to not allow people to vote, and I don’t think they understand that there are Republicans who also took part in drive-thru voting.”

This article originally appeared in The Texas Tribune at https://www.texastribune.org/2020/10/31/harris-county-drive-thru-votes/.