The media needs to stop laundering these 5 insidious GOP lies 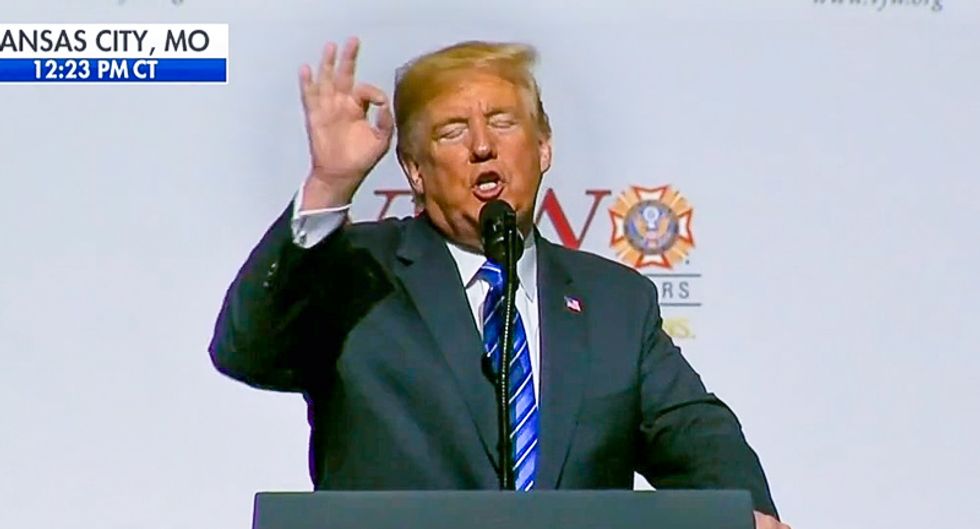 Regular readers of the Editorial Board are familiar with the layered complexity of our moment. The crisis we face isn’t only political. It isn’t just economic. It isn’t about public health alone. It’s also an information crisis. Too many people in too many places in this country believe fantastical lies as if they were true. The Russians did a pretty good job, but 2016 was nothing compared to what Fox and others do to Americans every day. Victory for Joe Biden won’t change this. It will probably make matters worse. The key, I think, is raising awareness of what’s happening, how and why.

Alexander Nazaryan is a Yahoo News correspondent whom God has unfairly blessed with a scintillating combo of political shrewdness and literary sensitivity. On Tuesday, he described on Twitter the main method by which Fox and others bully their way into the American political consciousness: “Conservative media routinely manufactures scandals—John Kerry’s service in Vietnam, Hillary Clinton’s email server, Hunter Biden’s emails—then browbeats mainstream media into not covering those ‘scandals’ to [a] sufficient degree. It’s bad-faith politics and huge disservice to voters.”

That, however, is only half of it. With respect to Nazaryan (whose writing I encourage you to seek out and savor), we need to see the fullness of what Fox and others are doing to America. We need to see that it’s lying at scale with the intent to injure. That it aims to poison the citizenry’s understanding of public affairs. That it creates conditions in which the truth itself is partisan. That it provides Americans with an escape from their civic and social responsibilities. That it fabricates the illusion of freedom when there’s really barbarism. Most of all, we need to see when “mainstream media” play along, they are enabling the above. They are, in a very real sense, complicit in our betrayal.

The following are 5 Big Lies that members of the Washington press corps accept as true or habitually repeat uncritically in their reporting. In the process, they launder these lies, give them credibility and legitimacy, and mask their illicit and injurious origins. Fact-checking, while entirely admirable, is entirely insufficient to holding the powerful to account. To do that truly, the press corps must stop appeasing the bullshit.

This is the idea that US Supreme Court justices should interpret federal law and the US Constitution “as written,” not as they might wish they were written. It’s a lie. First, “interpret” does not mean “see what you want to see.” It means “interpret” areas of law that, as written, are unclear. Second, and more importantly, the Constitution is not a simple document. It’s as full of contradictions as America is. It is also a document that’s been rewritten over the course of our history. When someone says “interpret as written,” does that mean in 1789, when slavery was OK, or 1865, when it was abolished? Once you see the lie, you wonder why the Republicans keep telling it.

The Republicans are not “pro-gun.” They are pro-intimidation. They are pro-anarchy. They are pro-vigilante justice. While the Second Amendment is (arguably) about the right to self-defense—as written, it’s about militias and national defense—it does not in any way, shape or form empower one class of people over and at the expense of another class. As it is, Republican jurists have repeatedly seen what they want to see so that the desire for peace and security is second fiddle to the desire for unlimited firepower. It’s no coincidence the Republicans went gun-nuts after the election of the first Black president. Democracy is no longer a means to power. It is now an obstacle.

3. The sanctity of life

This is another one of those principles that’s always true to Republicans except when it’s not. States have the right to control their destinies when the federal government is trying to force states to treat non-white human beings as human beings entitled to the blessings of citizenship. But those rights are conditional when it comes time to cut taxes for the obscenely rich and pay for it by stealing from states that did not support a Republican president. Republican justices, meanwhile, always stand for states rights—unless they dampen the fun of undercutting Democratic voters. In 2000, they ordered Florida to stop counting Florida’s votes. A recent ruling has the makings of a repeat.

Specifically, I’m thinking of the idea that Twitter and other social media platforms censor “conservative” voices. First, Twitter is a private entity. It has the right to refuse to post whatever it does not want for whatever reason it wants. (It does owe anyone a reason, though.) Second, private entities do not “censor.” Only governments do that. Third, if I, as a private citizen, don’t like what you’re saying, I can tell you freely to shut the hell up. That’s a reaction to your free speech in the form of my free speech. Even if I use violence to silence you, that’s not censorship either. That’s a crime punishable by law. The Republicans do not stand for free speech. They stand against yours.

These are five examples. There are lies aplenty. (Let me know if you want to see more lies debunked in the comments section below.) Though varied, they share a common purpose: creating a system that’s separate but not equal, a lawful republic in which the very rich are free to choose while the rest of us are held responsible for their choices.