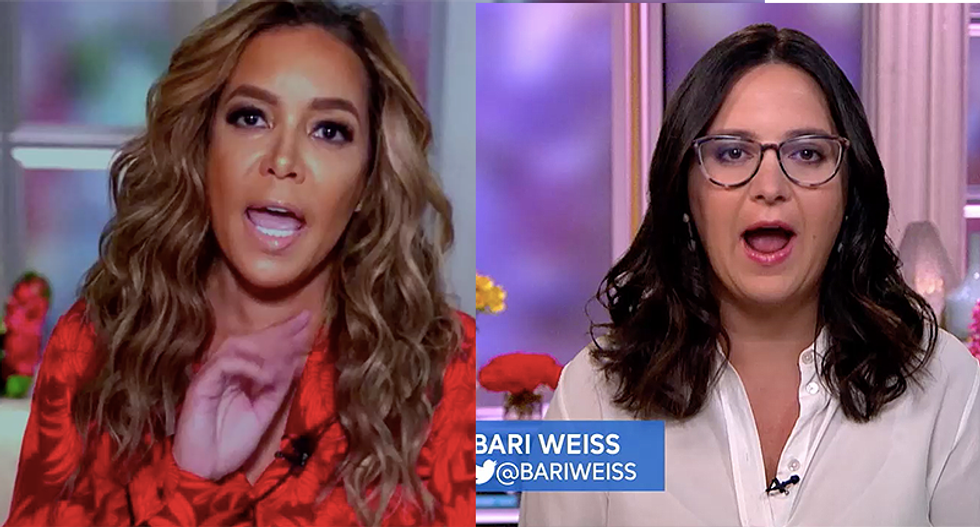 Conservative Bari Weiss appeared on "The View" Tuesday as Meghan McCain remains on maternity leave and Ana Navarro was unavailable. She was immediately fact-checked by the co-hosts when she attacked former Vice President Joe Biden for refusing to answer questions about so-called "court-packing."

Co-Host Sara Haines described the swearing-in of Amy Coney Barrett as "secretive" and "strange," because it happened under the cloak of darkness the second the Senate vote had finished.

"This is the first time in 151 years she didn't receive one single vote from the minority party," Haines noted. "It kind of spoke to how divided we are. There was a bit of heavy-heartedness as I watched this. It made me sad. Swearing in a Supreme Court justice should be a great moment for our country and also for her as an individual."

Co-host Whoopi Goldberg noted that Trump put her on the federal bench three years ago so that he would be able to nominate her to a higher court.

"Do you feel like she's ready for this or is this something you should get thrown into?" Goldberg asked Sunny Hostin.

"Well, look, she is a constitutional law scholar," Hostin said. "I don't know that anyone is questioning her legal chops. She's only been a judge for, for, you know, three years. She was put on the circuit court I believe in 2017. She's never tried a case before. She's never argued in front of the Supreme Court. That kind of experience is lacking. She certainly is a brilliant constitutional law scholar. That being said, it was really odd that she even participated in the pomp and circumstance that we saw yesterday. She didn't owe President Trump anything. She didn't have to be on the White House grounds, especially after the superspreader event of her appointment at the Rose Garden. I thought it was poor form. I thought it showed a tremendous lack of judgment."

When it comes to her appointment in general, Hostin said it will change the face of the court for sure, not only for how they handle the cases but how the court looks.

Weiss said that it isn't considered "court-packing" when there are nominations to be filled. But the reason that those nominates went unfilled is because of the political tactics employed by Republicans in the final two years of President Barack Obama's term in the White House. He was not only blocked from appointing a Supreme Court justice when one died, but all of his lower court judicial appointments were held up, even if Republicans had supported the judges in the past.

Weiss tried to allege that Vice President Joe Biden said that he wouldn't answer whether or not he'd "pack the court" until after the election, but Goldberg and Hostin explained that twice Biden has answered the question. Once during a press Q&A outside of a campaign stop in Pennsylvania and again on "60 Minutes" on Sunday.

"To your other point, Bari, about Joe Biden he answered that question. He said he was going to study the issue of the Supreme Court," said Hostin.

"I think it is a good answer," Hostin replied.

"He's answering the question in a bipartisan way because he wants this country, not to be as divided as it has been," said Hostin. "He wants to bring the country together. The way to do that is to study the issue in a bipartisan way. I think that's the best answer anyone has really provided."

At the same time, if the Senate isn't won by Democrats, it limits any options Biden would have with the courts. It's possible that McConnell would again refuse to allow Biden to appoint any justices for four years while he's in office. But if the Senate is won by Democrats, there are more options available for stabilizing and "unpacking" the courts.