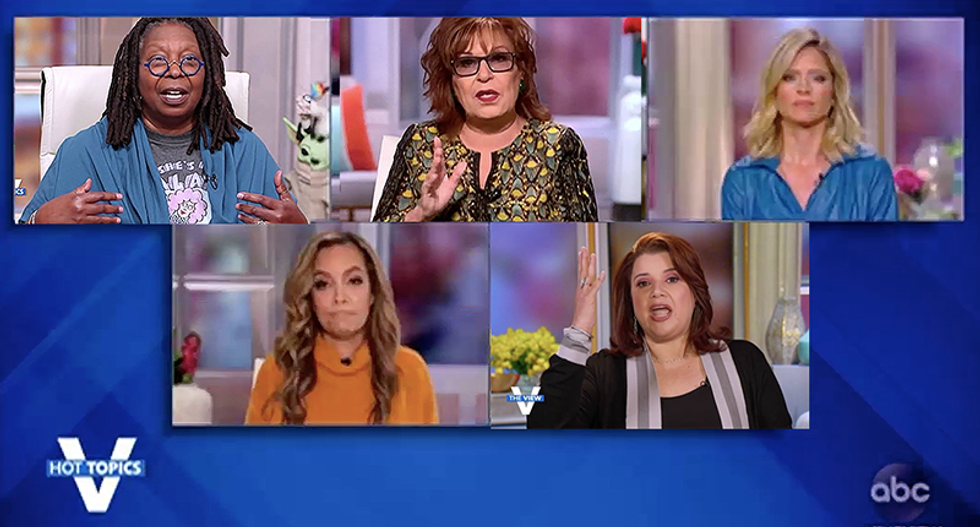 The women of "The View" were furious with President Donald Trump's joy ride with Secret Service agents on Sunday to wave to supporters who had gathered outside of Walter Reed hospital.

Trump released a video ahead of the stunt, saying that he has been "to school" over COVID-19 and he "gets it" now. However, he then went out in an isolated car, so the hosts noted that it's clear he still doesn't "get it."

"So, you know, let's not kid ourselves. He's the head of the free world," said co-host Whoopi Goldberg announcing the segment. "So, he's -- whatever they're giving him, they're giving him to pump him up and make him look like he ain't sick. So, does this seem like he's a changed man to you, Joy? Does he get it now?"

"It's right out of a dictator playbook," said co-host Joy Behar said of Trump's "parade" to his adoring fans. "Parade the dictator around so that the world and the country -- America --can see that he's still alive and he's still robust. But, you know, I thought to myself, usually, the hostages are not driving the car. The thing about getting it, he certainly gets it now. Now that I get it, this coronavirus, it's not a hoax anymore. That's what he learned. He didn't learn that 200,000 people and counting have died from this. Do you know they're projecting 1 out of 10 in the world will have the coronavirus?"

Sunny Hostin agreed, saying that his willingness to put the lives of the Secret Service agents in the car at risk showed that he doesn't "get it."

"I do think it was his way of trying to assure the public that he's okay," said Hostin. "And I think that's of course, very important for a president to do because it is a matter of national security, right? But I don't think that's the way to do it. You don't reassure the public by signing an empty seat of papers with the Sharpie and pretend that you are working on nothing."

She noted that the vehicle Trump was in was hermetically sealed to ensure there could never be a chemical attack on the president.

"So, that means it seals the virus inside," Hostin continued. "So, he is infectious, and those Secret Service agents then, their lives were put at risk by this president. They have families that they want to go home to as well. So, what that told me was by his reckless actions, he didn't care about the very people who are sworn to protect him. So, that is not reassuring to me. If he doesn't care about those people, does he care about the rest of the country?"

Sara Hines was furious that Trump would do something so "irresponsible and selfish," she said Monday.

"We have had very clear guidelines that when you have exposed yourself to the virus, you isolate," Haines explained. "When you have been exposed to the virus, you quarantine. We have had state -- you can't even travel right now to certain states even if you have had no exposure without quarantining by choice just for precaution. In one video he talks about -- I didn't want to be stuck in the White House. They told me to go upstairs and to quarantine, and he didn't want to do that. He wanted to be right out in front, and I just think it was a slap in the face to so many people who have dealt with this pandemic since, you know, the beginning of the year and have not been able to say good-bye to loved ones, who have missed life events and stay in and don't go out because that's what the doctors told us. So to have him optically do this, it was selfish."

Conservative commentator Ana Navarro, who appeared on the show to fill in for Meghan McCain, was incensed, comparing Trump to “Queen Elizabeth” waving at people and “flaunting his privilege.”