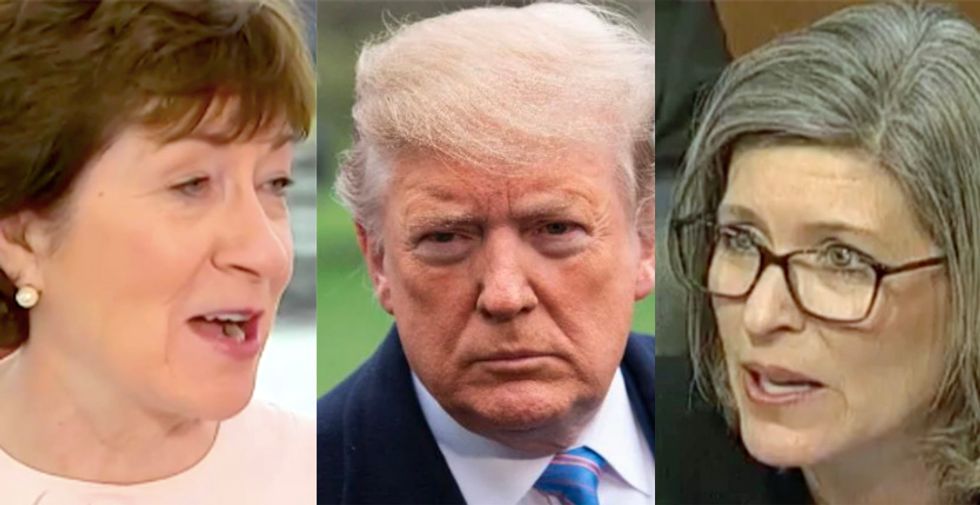 Several Republican senators up for re-election are walking a fine line in regard to some of the hard Supreme Court issues that could ultimately shape the future of America.

With their Senate seats in jeopardy, Sens. Joni Ernst, (R-Iowa) and Thom Tillis (R-N.C.), have taken a more moderate approach to pertinent issues like Roe v. Wade in an effort to distance from hard right views. As they both are fighting uphill battles to retain their seats, they've made it a point to steer clear on critical issues, namely abortion rights.

Tillis also weighed in with a stance similar to Ernst.

"I've heard my opponent talk about Justice Barrett will get on the bench and overturn Roe v. Wade," he said in the race's final debate Thursday night. "Nobody knows how she's going to rule on that."

Despite their claims, Jeff Timmer, former executive director of the Michigan Republican Party, argues otherwise. Although there has not been a direct conversation regarding Barrett's stance on abortion, Timmer has insisted that her stance could not be more clearer. During an interview on Friday, the a veteran GOP strategist argued his point.

"I think it's the worst poker playing I've ever seen," Timmer said. "They're bluffing...She has a clear paper trail on abortion...I mean, is Trump going to withdraw the lawsuit? It's ludicrous to say that it's not going to happen. That's the impetus for getting her confirmed ahead of time because it's politically dangerous for them to rush forward."

The latest news comes as Senate Majority Leader Mitch McConnell (R-Ky.) continues his efforts to move forward with the Senate floor vote for Trump's Supreme Court nomination of Judge Amy Coney Barrett. Despite opposition from Democratic lawmakers and multiple Republican lawmakers currently infected with coronavirus, McConnell is still adamant about moving forward with the vote in an effort to seal the deal before Election Day.

While Trump was hospitalized with COVID-19 at Walter Reed Medical Center over the weekend, he tweeted to reiterate his intentions. McConnell made it clear that the Senate would move on despite the president and multiple senators battling coronavirus.

"Full steam ahead with the fair, thorough, timely process that the nominee, the Court, & the country deserve," Senate Majority Leader Mitch McConnell tweeted.

McConnell has been met with sharp criticism since the latest coronavirus outbreak at the White House appears to have stemmed from the Rose Garden event for Barrett's nomination.