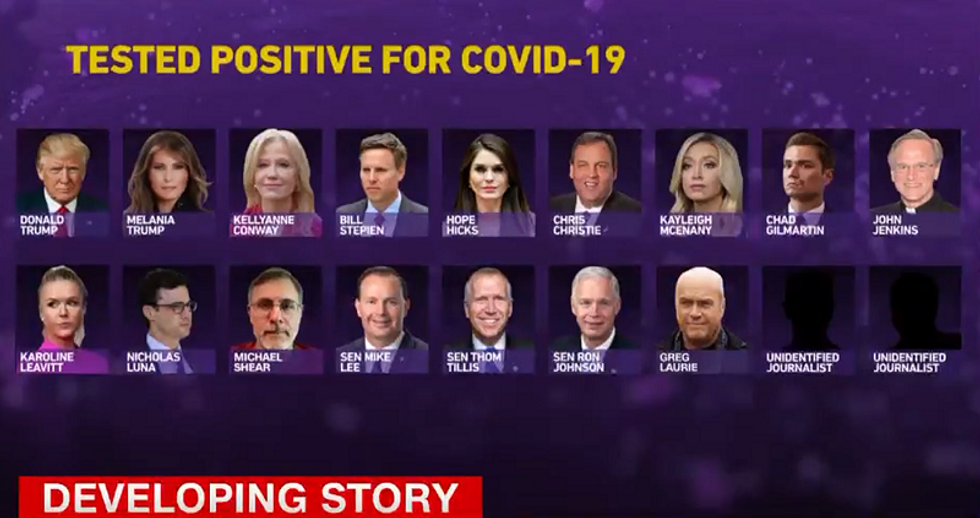 A CNN graphic on Tuesday showed the large number of people who have been infected with COVID-19 in the last week thanks to contacts with President Donald Trump's White House.

As the graphic was displayed, CNN White House correspondent John Harwood said that it showed the extreme recklessness with which the president and his staff had treated the disease, which so far has killed 210,000 Americans in just eight months.

"[Trump's] leadership is all devoted to the service of his ego and that is now leaving a trail of wreckage behind him," Harwood explained. "His campaign manager, his press secretary, his close aide Hope Hicks, his wife Melania Trump, multiple Republican allies in the Senate and elsewhere, it is staggering the way in which this president's compulsions, his priorities are getting people sick."

Harwood then said that this bodes particularly ill for the nation's public health situation in the coming weeks.

"As the doctor just indicated, over the next couple of months they're quite likely to get a lot of Americans killed by the fact that he is unwilling to lead in a way that shows concern for others, that tries to account for the feelings, the impacts of his action on other people," he said.