Trump aide condescends to female host when she asks about Trump’s PR stunt: ‘You’re being a little bit silly’ 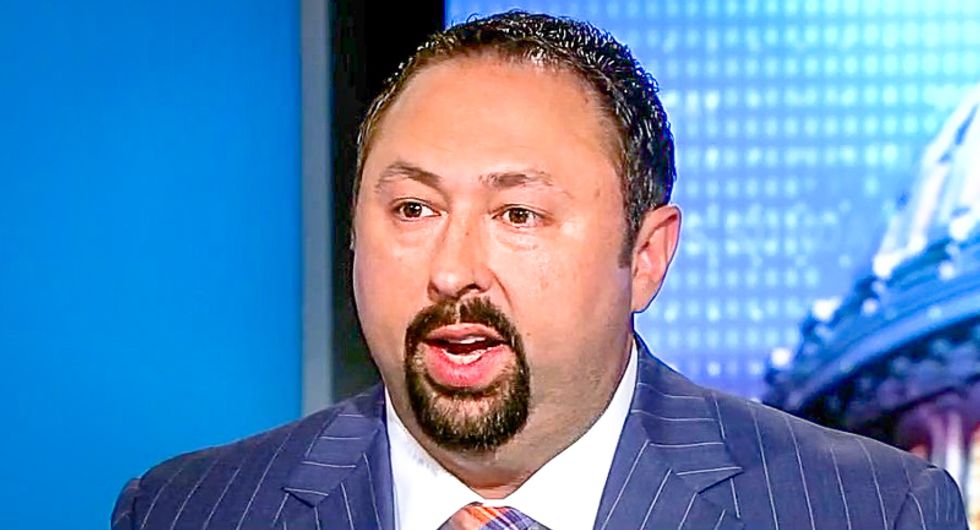 Jason Miller, senior adviser to the Trump 2020 re-election campaign, appeared on CNN Newsroom With Ana Cabrera Sunday to discuss the president's publicity stunt outside of Walter Reed Medical Center. The result was condescension and chaos.

Cabrera kicked off the interview with the pointed question, "Why did the president leave the hospital for this publicity stunt?"

"Couple of things I want to tell you," Miller said. "I want to tell you about two conversations with the president. One about 15 hours and one yesterday. When I had a lengthy conversation with him yesterday, he said two more things. Number one, we're going to defeat this virus. He's going to defeat it. We're going to defeat it as a country and go win this campaign. He said another thing I found important. He said be careful. Wash your hands. Use hand sanitizer. If you can't socially distance, wear a mask. Be careful. Very important message from the president."

"Okay, let me stop you there," Cabrera said, "Back to my original question which was about the publicity stunt of him getting in this vehicle. Is that him being careful putting Secret Service members at risk when he has the coronavirus and is apparently very infectious given his symptoms?"

Miller pressed on that, "President Trump was feeling very good yesterday. He's feeling even better today. It's good to see him on the mend - good to see him on the rebound...He wanted to as a sign of gratitude show folks he's still fighting for them, looking forward to getting back out on the campaign trail. In a safe way he drove by and said hi. He did that in front of the cameras so the media was able to see it."

Miller then referred to COVID-19 as the "China virus" and said Trump was better able to understand the pandemic having experienced it himself.

Even still, Trump's version of the pandemic isn't nearly as catastrophic and horribly jarring as the American people he's sworn in to protect.

"Hundreds of thousands of Americans have battled and they died from the virus, Jason, they have had to do so alone," Cabrera said. "Family and friends aren't allowed in the hospital, can't go on joy rides, can't be treated in the hospital until they are critically ill. How does a stunt like this that not only puts a spotlight on the inequities and cavalier attitude, but endangers the lives of others helping his campaign?"

"I don't think this was a stunt at all," Miller answered. "This was President Trump showing people he's very gracious for the hospitality they have shown him, for the support he has, the hundreds outside Walter Reed Medical Center there."

"I'm not part of White House operations or the White House medical unit so the exact logistics I can't speak to, but I know the Secret Service takes this very seriously," Miller said, later adding that "one life lost because of the China Virus is too many. I think President Trump has been very clear in articulating that over and over that we have to go and destroy this COVID-19 that we got, that our country has been attacked by. That's a very clear focus from the president."

"He's been downplaying the virus," Cabrera said. "Let's just be honest. Let's call a spade a spade. He has not been speaking about the virus in a serious manner. Yes, it's true. We've heard him on tape talk about how he intentionally downplayed this virus. He hasn't worn a mask every time. He's been holding these rallies without social distancing with most of the people in the crowd not wearing masks either."

A bit further into the interview, Cabrera said, "Jason, let's be clear: the president is in the hospital right now because he contracted the virus."

Miller replied, "President Trump followed all of the protocols."

Miller pushed back, "Everybody around him was tested. They kept distant and somehow he contracted it. My whole point earlier."

"That's not true, Jason," Cabrera said. "We have the video in which the president is at events where people aren't following protocol, social distancing, aren't wearing masks, who aren't following the CDC guidelines or Coronavirus Task Force guidance."

He then called her "silly" when she asked him why Trump's team was hiding his last negative test result.

Watch the entire exchange below.

Miller served as the chief spokesman for Trump's 2016 presidential campaign and was on the president's transition team.